Three island destinations that should be on your travel radar

Caribbean travelers are always keen to find that next great new place, but most also want to experience of a bit of local flavor. These three islands offer up traditional culture, natural beauty and some of the finest and newest resorts in the region. See what’s trending on these authentic Caribbean isles and make sure they are on your radar.

Spices in the air, waterfalls cascading from rainforest slopes, colorful island sloops lining a Colonial era harbor. These are the visions conjured by the slogan “Pure Grenada,” which is this three-island nation’s new statement of cultural identity. The fertile volcanic soils still sustain a thriving agricultural economy, but Grenada also nurtures a growing tourism infrastructure that is proving equally rich and rewarding for both hosts and guests. On the hillside overlooking Grand Anse Beach, Kimpton Kawana Bay has broken ground and is slated to open in 2019. A 375-acre resort and residential development at Levera Beach Resort includes the boutique Turtle Beach Hotel, which will open in late 2017. In addition, the landmark Mount Cinnamon property is undergoing a renovation and expansion that will add another section of villas. 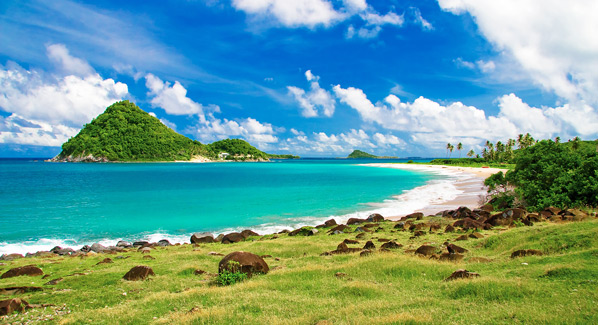 On the secluded north shore of Grenada, the Turtle Beach Hotel overlooks the pristine sands of Levera Beach and a pair of private islands accessible to hotel guests. Photo: Joshua Yetman/Grenada Tourism Authority

Stunning beaches and natural beauty aren’t the only assets drawing visitors to Grenada. The islands are steeped in tradition, which manifests in a year-round roster of festivals and cultural events. With a deep connection to food and locally grown produce, the Chocolate Festival celebrates the island’s agricultural tourism. Traditional crops such as allspice, cinnamon and nutmeg now take a back seat to the production of cacao, and chocolate may have its place on the national flag one day. Sister isle Carriacou maintains a line up of festivities rooted in local tradition. The annual Carriacou Carnival includes dancing in the street, parades and competitions that include rhyme and humor. The island also hosts the Maroon & Music Festival, honoring African origins depicted through drumming and singing. 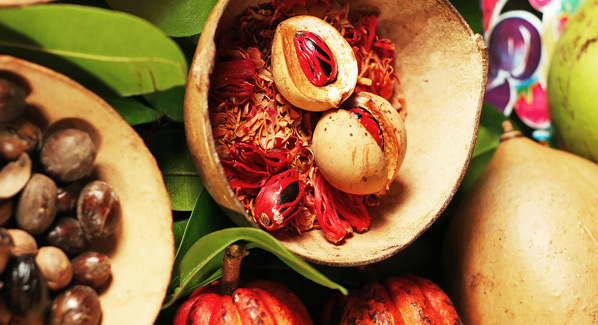 Grenada is known as the Spice Island, famous for its groves of nutmeg and cinnamon. In recent years, chocolate has become a sweet addition to the agricultural scene. Photo: Joshua Yetman/Grenada Tourism Authority

It’s been just over a decade since the government of St. Kitts made a conscious decision to transition the local economy from an agricultural base to hospitality. Today a quarter of the population is involved in tourism, and new residential and resort properties are opening each year. A key focus of this planned growth is preserving the elements that have made St. Kitts such a desirable destination. This is an island known for its green landscapes, uncrowded beaches, historic sites and plantation inns. With infrastructure on the rise, and construction prevalent on the once vacant hillsides, the government has taken measures to protect the cultural and natural heritage of the island. More than a quarter of the island is set aside in nature preserves, and marine parks line the shores. 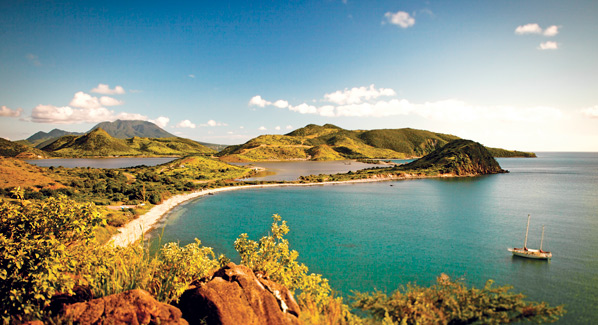 On the southern coast of St. Kitts, a long peninsula known for pristine beaches and secluded bays is now home to the marina village of Christophe Harbour and soon, the Park Hyatt hotel. Photo: St. Kitts Tourism

Of the several new resort and residential projects underway, the island’s new favorite is Kittitian Hill, which sits on 400 acres of organic farmland that stretches from the slopes of Mount Liamuiga to the beach. Here, guests of Belle Monte Farm are housed in a collection of authentic West Indian cottages and farm houses, and dine at The Kitchen Restaurant, where cuisines are derived from the on-site organic gardens. The Kittitian Hill project continues to expand with new villas and programs created to immerse guests in the local culture and agriculture scene in a setting that resembles a traditional village. Another ongoing project is the marina village of Christophe Harbour, where the shores are lined with restaurants, bars, shops and home sites. The once vacant peninsula will have its first full-service hotel when the Park Hyatt opens in the summer of 2017. Also on the horizon and slated for 2017 with a price tag of $180 million is the Koi Resort & Residences, a multi-use resort development with 295 villas and suites located adjacent to the Royal St. Kitts Golf Club. Two smaller projects include the Imperial Bay Beach & Golf Residences adjacent to the Koi, and the Silver Reef Resort, another residential plan with one, two and three-bedroom apartments. 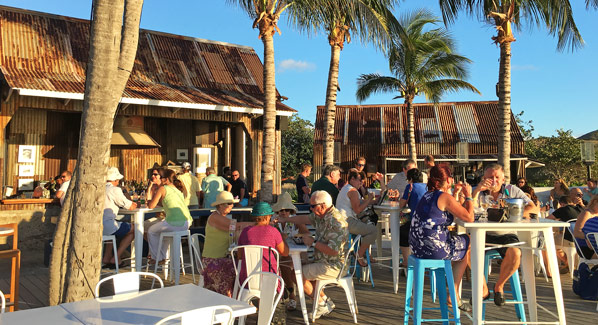 On the southern coast of St. Kitts, Salt Plage is new spot at Christophe Harbor. Patrons can enjoy craft cocktails while relaxing in day beds or hammocks suspended over the water. Photo: Debbie Snow

With loads of scenic beauty and a unique French Creole mix of cultures, Guadeloupe has long appealed to Canadian and European tourists. Today, thanks to additional air service, these islands are also attracting a growing U.S. market. But the international influx hasn’t changed the character of the destination, and this gem of the French West Indies remains true to its roots. In addition to the culture, the landscape delivers a wealth of natural attractions. The white sand beaches, coral reefs and seaside villages of Grande-Terre stand in stark contrast to Basse-Terre, where shores are lined in dark volcanic sands and backed by towering mountains laced with hiking trails and waterfalls. Also in the mix is a collection of unspoiled out islands, where life moves at a slower pace. Guadeloupe is noted for its French Creole culture and delicious Creole-based cuisine. Visitors will find an abundance of seafood dishes accented with local fruit and vegetables. 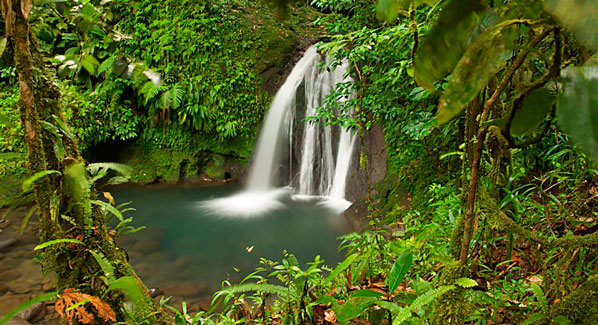 The Cascade Aux Ecrevisse is one of Guadeloupe’s most popular waterfalls. It can be reached by an easy ten-minute walk along a well-maintained pathway. Photo: Guadeloupe Islands Tourist Board

At the center of island culture are the markets. The largest in the heart of Pointe-a-Pitre is filled with vendors offering spices, seafood and mounds of fruits, vegetables and locally made condiments. Also noteworthy are the markets at Sainte-Anne, and new to the scene is the Friday night market at Gosier, which includes artwork from local artists, baked goods as well as produce and spices. A favorite place to stay in Gosier is Auberge de la Vieille Tour, a charming seaside resort with a touch of Creole décor over French colonial architecture. On the hillside overlooking the ocean, La Toubana Hotel & Spa has added ocean view suites, two with their own pools. Guadeloupe’s new focus comes in the form of eco loges. Two new projects offer up alternatives to typical hotels and serve as environmentally sound stays. Aqua Lodge is a floating hotel equipped with solar panels and Tendacayou is a retreat and spa in the rainforest on Basse- Terre. 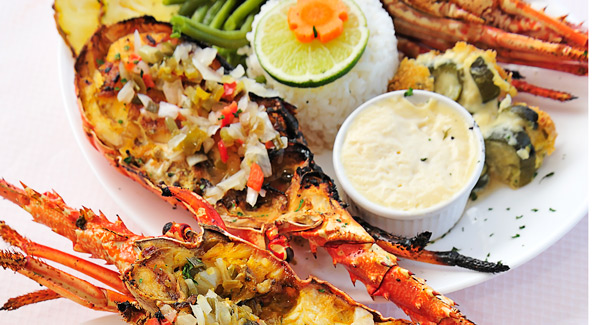 On the islands of Guadeloupe, the blending of Creole flavors and French flair creates a savory range of cuisines, often featuring fresh seafood and locally grown fruits and vegetables. Photo: Shutterstock