Five unexpected snorkeling experiences that anyone can enjoy

Sure, you’ve explored the shore in front of the hotel, and maybe even signed up for a boat trip to a nearby coral reef. But are you ready for a snorkeling adventure with a wow factor and maybe some bragging rights? These adventures exist in places across the Caribbean. But though they can be thrilling, they aren’t dangerous. Here are five of my favorite Caribbean snorkel adventures that go beyond the usual reef tour.

Legend has it that the infamous pirate known as Blackbeard once stashed chests of gold and plunder in the sea caves of Norman Island. But even those who doubt that tale would agree that the real treasure is the chance to snorkel into this trio of semi-submerged caverns, which are cut into a cliff face just south of the popular harbor known as The Bight. It’s suitable for all ages, because there’s always a hint of sunlight in the caves, and no branching passages. I’ve brought dozens of snorkelers to this site during charter trips, and usually give them a waterproof light so they can hunt for marine live in the nooks and crannies, and admire the purple and red patterns on the rock faces inside. 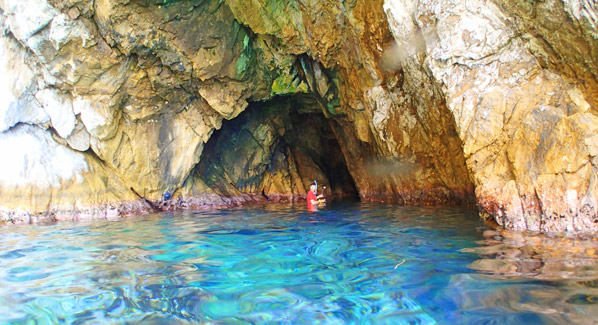 The caves at Norman Island are said to have once held treasures hidden by the pirate Blackbeard. Snorkelers can safely explore these mysterious caverns. Dale Harrison/Flickr

Legends of the Bermuda Triangle meet tales of the lost city of Atlantis just off the shores of the tiny Bahamian island of Bimini. On the island’s western shore, a half-mile-long line of rectangular limestone blocks runs parallel to the shore. This unusual formation was first discovered by free diving legend Jacque Mayol, and in the years since, all manner of experts have speculated about the origins and purpose of the structure. Some say it’s the remains of a wall or a pier, while others have pegged it as a highway that was once part of the fabled lost city of Atlantis. I’ve explored this site on scuba dives several times, but actually enjoy it more when seen from above. When floating on the surface with mask and snorkel, you can make out the full extent of the formation in the clear waters below, and then form your own opinion on its origins. 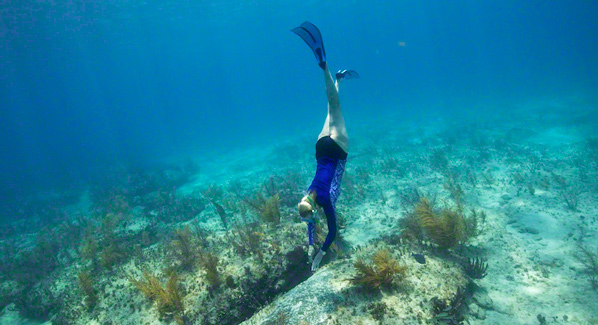 A snorkeler descends in clear Bahamian water to examine the unique formation known as the Bimini Road. Some believe it to be part of the ruins of the ancient city of Atlantis. Photo: Atmoji Photography/Flickr

The aerial view of Captain Jacque Cousteau’s Calypso floating in the center of a gigantic submerged crater in the center of a Caribbean coral reef became a world-famous image. This perfectly round geological anomaly measures more than 1,000 feet across, and plunges down to more than 400 feet. I’ve done deep dives into the Belize Blue Hole, but honestly, the most interesting sights are right at the top, where the shallow rim of the hole is ringed in growths of coral. It takes a two-hour boat ride from Belize City or one of the resorts on Ambergris Caye to get to Lighthouse Reef and the Blue Hole, but the reward is a chance to glide over the cliff-like edge of the hole into deep water, then spend time watching tropical fish among the corals. Keep an eye open, because there’s always a chance to catch a glimpse of large tarpon or reef sharks emerging from the shadows below. 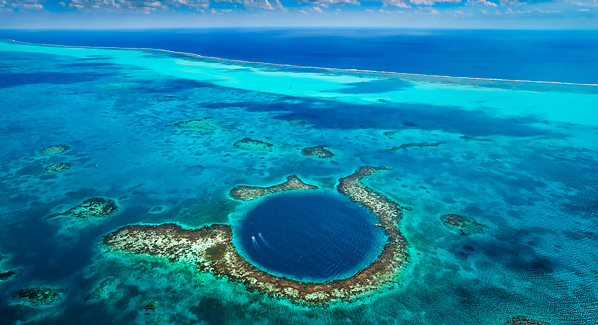 The Belize Blue hole is a massive 400-foot-deep pit set in the center of Lighthouse Reef. The rim of the hole is covered in coral gardens that are ideal for snorkelers to explore. Photo: Kasia Kaczy?ska/Flickr

Mexico’s Yucatan peninsula is riddled with cenotes, which are natural sinkholes in the limestone bedrock that fill with clear fresh water. Many of these cenotes are connected to underground rivers that form the longest underwater caves in the world. But you don’t have to be a bold explorer to enjoy these amazing places. With just a mask and snorkel, I’ve swum in dozens of these natural pools. Often, the walls overhang the water, creating a chance to swim into the twilight zone and discover marble-white stalactites hanging from the ceiling. A personal favorite is Dos Ojos Cenote, where swimmers can follow a set of guidelines through a maze of caverns that connect a pair of sunlit pools. You can explore for yourself, or hire a guide to lead the way. 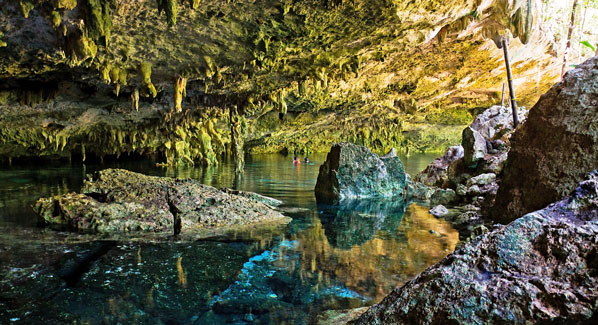 The cenotes of the Yucatan Peninsula are filled with clear fresh water. At Dos Ojos, snorkelers can swim through overhanging ledges that lead to stalactite-decorated chambers. Photo: Guillén Pérez/Flickr

This snorkel adventure is more about relaxation than excitement, but that doesn’t make it any less memorable. It begins with a trip to the undeveloped east coast of Bonaire, and a stop at the Mangrove Information Center within Lac Bay National Park. Here, you’ll sign up for a guided kayak tour that leads through the twisting channels that lace the mangrove forest. Once you reach a hidden bay deep in the reserve, you’ll have a chance to get out of the boat and wade in waist deep water. There’s not much to see out in the middle of the sand bottom bay, because the real show begins when you swim closer to the tangled underwater roots of the mangroves themselves. These roots provide shelter for numerous species of small and juvenile marine life, making Lac Bay the island’s primary fish nursery. If you are lucky, you might also be treated to a swim by from one of the bay’s resident snook or tarpon. 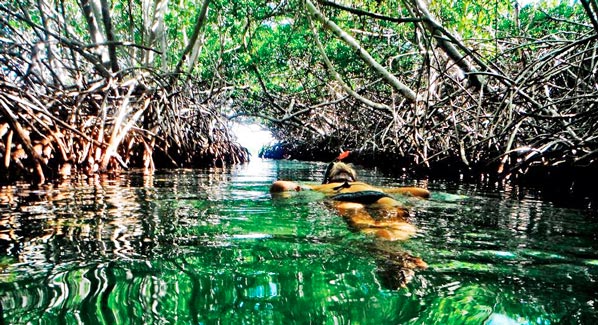 A snorkeler glides through a sand channel in the mangrove forest of Bonaire’s Lac Bay. The tangled roots of these trees create habitat for small fish and other marine life. Photo: Mangrove Information Center