The ever-evolving dining circuit in South Florida can leave you dizzy with so many delicious choices. So to simplify finding the best spot for your next dinner, we locked in the places we consider totally worth visiting. Since dining out is as much about the destination as the cocktails, cuisine and crowd, our picks include some tried-and-true establishments that seem to never disappoint, along with trendy spots where it’s all about the chef and a sprinkling of hip, beachy and romantically sublime thrown in the mix. 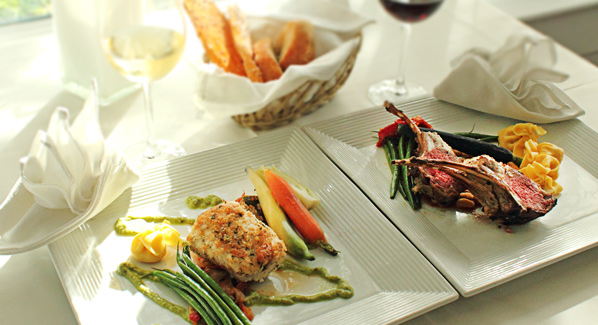 Simply divine, this romantic dining venue in Key West’s Old Town district sits on the corner of Fleming and Simonton streets, one block off of the action-packed Duval Street. Café Marquesa is attached to the luxury oasis known as the Marquesa Hotel, once a circa 1800s private home. The 50-seat restaurant features an eat-in bar; its mirrored intimate aesthetic, laden with cantera-stone floors, is bathed in muted golden tones and white linen tablecloths. A hand-painted trompe l’oeil wall is an inviting focal point, as is the view of chefs hard at work in the kitchen.

A bit more formal than what Key West is known for, Café Marquesa attracts sun-kissed diners who come for executive chef Susan Ferry’s elegant and contemporary American cuisine. Educated at the Rhode Island School of Design Culinary Program, Ferry furthered her chops by rooting herself in Key West. In her current role since 1997, she also happens to have been a protégée of chef Norman Van Aken (one of the creators of New World cuisine), who she worked alongside as sous chef at Marquesa’s original restaurant, Mira, in the late ’80s. Ferry also hit the mark as chef de cuisine and executive chef at the touted Key West hot spot, Louie’s Backyard. Her inspired menu changes here nightly. Ingredients sourced direct from the Florida Keys are memorable; tropical fruits and vegetables, fresh local fish such as black grouper and yellowtail snapper are ever-present. 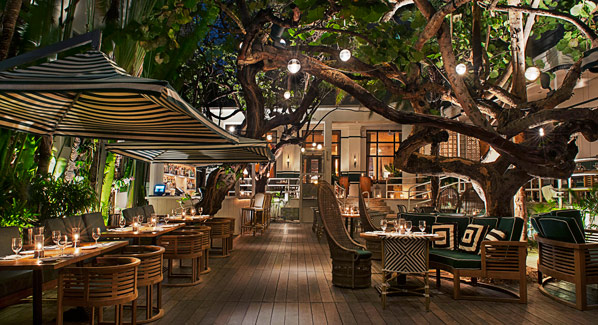 One of Miami’s most popular chefs, Michael Schwartz pioneered Miami’s farm-to-table dining with dishes that resonate with an appreciation for locally sourced products. His arrival in 2007 to what is now the luxury touted fashion-driven Design District followed his star-building turn at Nemo on South Beach. He had the guts and foresight to venture into what was a cityscape surrounded by urban blight. In no time, his Design District namesake, Michael’s Genuine Food & Drink, with its hip pub cachet and food that was authentic to its seasonality and harvest, became the foodie destination. The restaurant’s presence has been credited with helping turn the fringe neighborhood around.

This James Beard award-winner earned his culinary chops in kitchens from Los Angeles to New York City. The author of Michael’s Genuine Food: Down-to-Earth Cooking for People Who Love to Eat extended his reach from the mainland in 2013 back to South Beach on Collins Avenue. The Restaurant Michael Schwartz at the Raleigh Hotel lures Schwartz devotees and vacationing jetsetters. It occupies both the lobby’s upper deck and the tree-filled jungle-like outdoor terrace, with the hotel’s iconic 1940s art-deco pool in view. Schwartz’s farm-to-table philosophy reigns with his knack for treating ingredients with deference. Diners enjoy figs with house-made ricotta, hazelnuts, honey and arugula, and jumbo lump crab cakes in carrot-butter sauce. Drinks are plentiful, from Michael’s Genuine Home Brew to curated martinis, as are famed pastry chef Hedy Goldsmith’s desserts. 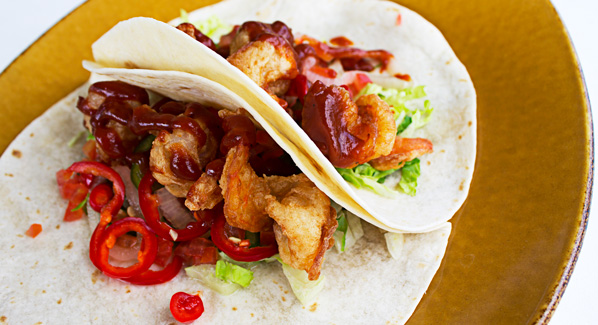 Tucked in Miami’s Wynwood Arts District, this tapas haven known for its inventive menu of “Global-Latino” small plates brims with urban hipsters sharing bites. A graffiti canvas with large, bold, thought-provoking works in hues of red and black by Shepard Fairey fill the interior bar; canvasses by German artist Christian Awe occupy the dining room. The late Tony Goldman of Goldman Properties was inspired to develop the venue in 2010; he was the driving force behind revitalizing the streets of a once warehouse district through a movement that embraces urban graffiti.

Wynwood Kitchen & Bar is an expression of the soul of the neighborhood. Graffiti immersion takes on a life of its own here, inspired by the adjacent Wynwood Walls, another Goldman creation. The park-like setting is home to evocative murals by some of the greatest graffiti artists, including Ron English whose totally pop “hulk boy” and “camo deer” characters appear. In this surreal setting, diners not only come for the art, but also to dine on Wynwood Kitchen’s outdoor terrace and to savor executive chef Miguel Aguilar’s queso frito with paprika sausage, crispy cilantro and salsa rosada, along with a cocktail aptly named Wynwood Inferno or for a Tony G, prepared with Bulleit bourbon, spiced lemonade and Drambuie. 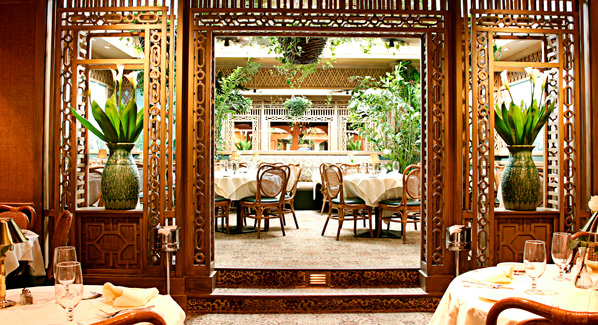 Touted as Palm Beach’s Legendary American Bistro Bar, Ta- boo dates back to 1941. Dignitaries and glitterati have graced its bar and dining room with their presence, including John F. Kennedy, Frank Sinatra and the Duke and Duchess of Windsor. If only the walls could talk. Hailed for its intimate ambience and menu of everything from Ta-boo’s crab stack to Brie and pears pizza, to this day, it is one of the hottest nightspots during the height of Palm Beach’s high-society winter season. That’s when Ta-boo buzzes with perfectly coiffed ladies; men arrive preppy perfect, right down to their sockless choice of shoes.

The historic spot is smack in the center of one of the most exclusive shopping districts known as Worth Avenue. It’s notable because Ta-boo is actually the only restaurant directly on the haute shopping street, versus those within the picturesque nooks known as vias. Within, a backdrop of palm tree-flocked wallpaper, bamboo and striped textiles welcomes a mixed bag of diners, who meet and greet with air kisses. This is a fabulous lunch locale for shoppers or just to peruse the scene and to enjoy a spectacular lobster or warm steak salad. Whether in society circles or not, don’t miss champagne cocktails and dancing on Saturday nights. 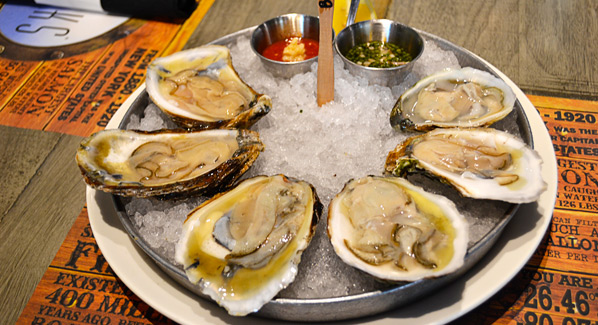 A popular spot on Florida’s southeast coast, Delray Beach with its pedestrian-packed Atlantic Avenue has earned itself a place on the state’s roster of cool dining hubs. A newcomer to the flourishing dining scene, local restaurateur Gary Rack is known for creating chic interiors with innovative food concepts. Rack has staked his claim on Atlantic Avenue and 2nd St. with his laid-back and airy Racks Fish House + Oyster Bar, where devotees who can’t get enough oysters fill the tables. Soon, his empire will include a new barbeque joint adjacent to the Fish House + Oyster Bar.

The bold illuminated red neon sign on the exterior is a stop-in- your-tracks grabber for anyone who might have missed the restaurant from the avenue. A once-beleaguered VFW post, dating back to 1948, is its foundation. High top tables outside are paired with booths covered with colorful sun-hued fabrics. Inside, a contemporary nouveau-nautical décor permeates. Stamped metal detailing is part of the elongated bar that faces the open kitchen; pale stacked brick columns and a one-off conversation piece of a graffiti-esque mural has an octopus as its star. Diners glimpse the shucking and kettle-steaming show from the bar and nearby booths. And those who make happy hour, which is packed from 3:30 to 6:30 p.m., find oysters at the bar for a buck each. Casual resort wear is the norm for chowing down on blue points, truffle Parmesan fries, ribs and skillet crab cakes, along with other responsibly sourced ocean- to-table menu offerings for lunch, cocktail hour, dinner or weekend brunch.

Favorite Bites: The raw bar’s Fanny Bay oysters and other bivalves, with classic mignonette and cocktail sauces, and shrimp and grits. 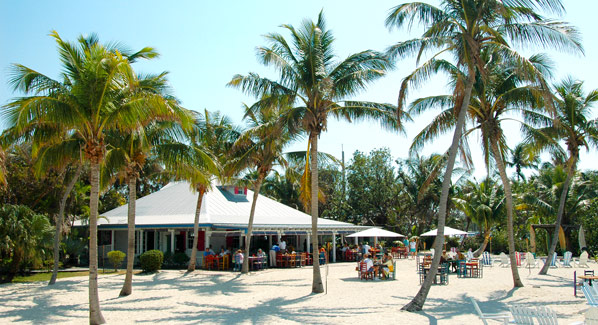 The rhythm of the steel drum and calypso tunes waft through the air at this slice of paradise at mile marker 81.6 on U.S. Highway 1 in the Florida Keys. The Beach Café at Morada Bay is the spot where swaying palms dot a color-infused surfer setting of longboards, shortboards and vintage surfer posters. Caribbean-inspired fare at lunch, dinner or cocktails conveys “escape” with every bite. The menu is packed with nibbles to share, such as ahi tuna taquito, a Cuban sandwich or Morada Bay crab cake with avocado salsa. While there’s more to the menu than seafood, including lip-smacking chipotle baby back ribs or five-spice pork belly accompanied by yucca fries, seafood is nonetheless king. Conch chowder, which is served by the cup, is deliciously flavorful and chock-full of tasty mollusk morsels.

Choice seating options include turquoise-hued bar stools and tables perched perfectly on the sand where Tommy Bahama fashion-clad diners take in the postcard view, which is especially breathtaking at sunset. While indulging in Surf’s Up martinis made with coconut rum, guests watch sailboats slink past on the glistening waters of the Florida Bay. Pastel painted Adirondack chairs facing the water are a great vantage point from which to see the daylight slip to dusk.

This long-standing Italian cucina and wine bar is the perfect spot for Italian comfort food. As owner Brent Lahaye’s legendary telling of the tale goes, it’s named as a nod to a friend, Giuseppe “Noodles” Panini, Jr., who was born in Italy’s Puglia region. Situated on Las Olas Boulevard, the fashionable thoroughfare in downtown Fort Lauderdale, the restaurant has been a magnet for locals and vacationers for years, with a steady flow of repeat diners. Guests come to savor some of the tastiest gravy and meatballs that will ever grace a fork.

Legacy has everything to do with this restaurant’s success. Lahaye takes pride in family recipes that have been passed down over generations. His Aunt Marion’s meatballs are a particularly delightful highlight. Enjoy pork, veal and beef finely ground together then slow cooked in tomato sauce with spaghetti or on ciabattine with house-made mozzarella. Take home a quart of Marion’s meatballs, Brent’s sauce or his mom’s meat sauce ($15 to $22). Inside, the ambience is cozy. Mahogany dominates with a bar that offers prime seats to see the action in the kitchen. Adjacent high top tables for two stand nearby, and comfy booths go all the way back against one wall. Lahaye is friendly and just might surprise with a stop at your table. On the smallish wrought iron-framed terrace, a handful of tables are positioned for catching the bustle of the boulevard.

Dining in the Florida Keys