Exotic yet close, alluring, and mystical; you’ll never be disappointed with any of the six islands open to visitors. Each is fascinating, full of history and culture while offering plenty of outdoor excursions on the water and land, there is exceptional flora and fauna, many species endemic to Hawai’i, and when it comes to dining there’s an array of culinary delights built on an ethnic collision of flavors from Portugal, China, Japan, and the Philippines.

Over-tourism has become a concern in many beautiful places around the world. Hawai’i is no exception. Locals have a profound connection to nature and their land. Today’s visitors should abide by the same values and attitudes; respect for Mother Nature and local customs is essential to being a good guest.

The original Hawai’ian homeland where stories and legends were born and the gods and goddesses reside, the Big Island is as diverse as its climate zones. Where else can you swim with giant sea turtles and see a snow-capped mountain in the distance? Mauna Kea is where visitors come to ski, star gaze, and hike. Sister volcano Mauna Loa dominates offering hikes that vary from challenging day jaunts to serious backpack treks of several days requiring permits. On this island of extremes, you’ll find whatever you might be looking for. 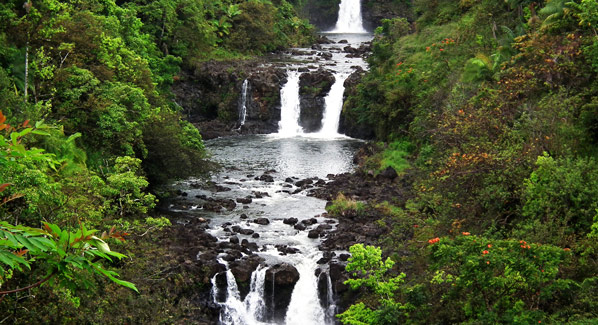 There are over a dozen waterfalls on the east coast of Hawai’i near Hilo. Three-tiered falls at Umauma is now privately owned and reachable via Umauma Experience. Photo: Wasif Malik/Flickr

At Hawai’i Volcanoes National Park see the active volcano, take a journey via the Crater Rim Drive and continue to Thurston Lava Tube, an incredible underground passage created by lava flows. Upcountry pastures of North Kohala include farmland and horse ranches. The scenic drive to Waimea a thriving community leads to Pololu Valley Lookout revealing coastline vistas of the Hamakua Coast. The island is laced with lush greenery leading to waterfalls, ringed with black sand beaches and winding roads with amazing lookouts.

So big and packed full of nature that you’ll be amiss if you don’t get out and explore and experience the Garden Island. The topography is lush and rugged, offering jagged cliffs, verdant valleys, countless canyons, and plummeting waterfalls. Days are filled with snorkeling Ke’e Reef, kayaking the Wailua River, and swimming at Po’ipu Beach. This enormous island has the most beaches of all the Hawaiian Islands, boasting 28 strands of black, tan, and white sands along its 11 miles of coastline. 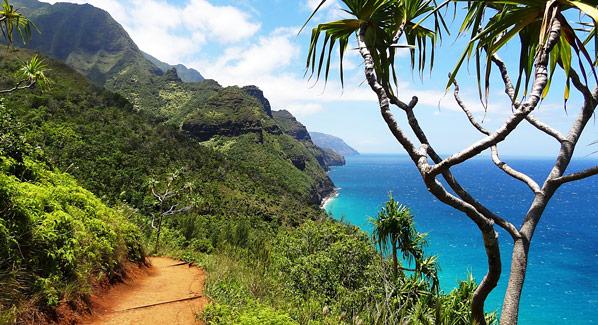 Trails along the coast of Kaua’i’s North Shore at Napali reveal emerald cliffs with stunning sand beaches below. Photo: kdvandeventer/Pixaby

Hard-core adventurous types might explore the trail of Waimea Canyon on foot but a slow and easy drive up to the top unveils plenty of lookouts along the way. A portion of the towering cliffs of Napali Coast can be reached via an 11-mile rugged trail but these cliffs seen from the water and air captivate everyone and, there’s always a rainbow on the horizon at the double-tiered Wailua Falls.

Explorers, serenity seekers, and fans of remote luxury find this isle a perfect fit. Once home to pineapple plantations, Lana’i now hosts two ultra-luxurious Four Seasons resorts. In contrast to the pockets of pampering, most of the island is rough and rugged and open for exploration. Ribboned with 400 miles of roads and pathways, only 30 miles are paved, leaving the rest of the island ready for off-road adventures. 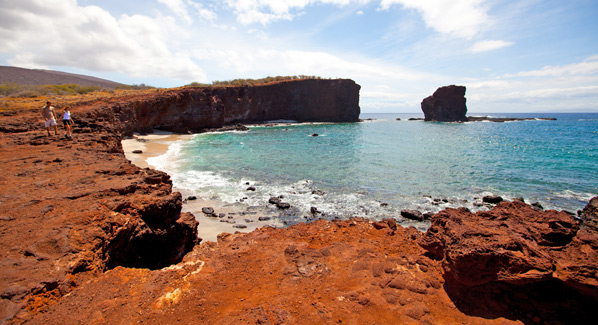 The Munro Trail, a long dusty route leads to Lana’i’s highest peak at Mount Lana’ihale, the peak unveils views of the neighboring islands of Maui, Moloka’i, and O’ahu. Hikers will find 20-minute easy paths and day-long challenging trails crisscrossing the interior along with parks where Garden of the Gods, best seen at dawn, showcases surreal lunar topography. Observe some of the rarest plants and birds in the world at Kanepu’u Preserve. The iconic heart-shaped sea stack at Pu’upehe is now a seabird sanctuary and is an easy walk between Manele and Hulopo’e Bays, best seen at sunrise.

Honeymooners, fitness fanatics, and rock stars gravitate toward Maui. Family-friendly and ultra-luxe resorts front some of the best beaches on the south and west coasts. Water-centric enthusiasts find sports from snorkeling to windsurfing and wellness seekers engage in yoga workshops and healing rituals. From funky hippie towns like Paia to the hustling cosmopolitan Kahului there’s a spot for everyone. 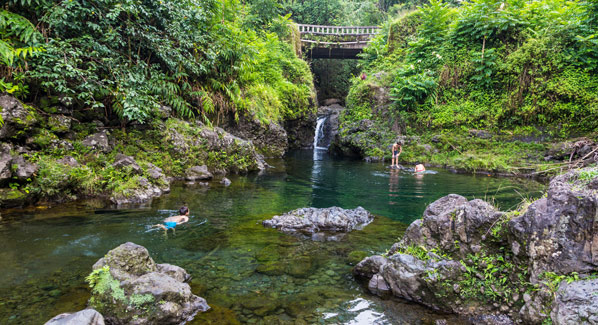 Wai’anapanapa State Park, just one of several parks on the island is the place for black sand beaches, tidal pools, and blow holes. The historic whaling village of Lahaina offers a quaint look into the past and a chance to hear authentic Hawai’ian music and take in a hula or local art fair. There’s a good chance to see whales here between November and May. A trip to Haleakala via bike or car is a sunrise event and an excursion from Kahului to Hana where the narrow winding road unveils bamboo forests and waterfalls that flow into black sand beaches creates lasting memories.

Moloka’i is an untouched slice of Hawaiian delight where residents remain true to their roots and strive to preserve the land and bucolic lifestyle. Visit the central island town of Kaunakakai and mingle with the residents at the general store and small shops, walk to the harbor to glimpse the daily catch, and don’t pass up a loaf of freshly baked sweet or savory bread. Steeped in island legends, and packed with breathtaking landmarks and natural beauty you’ll want to hire a local guide to impart the lure and soul of this remote crescent.

Moloka’i is etched in 88 miles of coastline, the most picturesque are the sea cliffs along the North Shore Pali. Photo: Tor Johnson/ Hawaii Tourism Authority

Hike the historic Halawa Valley where ancient Polynesians settled and home to towering waterfalls, sink your toes in the pure white sands of Papohaku Beach, one of the largest white sand beaches of Hawai’i, take a helicopter tour to the Kalaupapa Peninsula to see the world’s highest sea cliffs. Here you can snorkel the longest continuous reef in the United States; this 28-mile-long fringing reef on the southern shore is home to finger coral and reef fish; the natural beauty of Moloka’i captivates effortlessly. Taste local beans at coffee plantations, send home bags of macadamia nuts, and explore rare plants at Nature Conservancy’s 2,774-acre Kamakou Preserve. An island without commercial signage, a single traffic light, or big hotels, the isle is all about the way things used to be throughout the island chain.

Home to the capital, the most visited and typically the first stop on any trip to Hawaii this isle is aptly named the gathering place. This island has both city and country lifestyles, plenty of beaches, epic surfing, high-end shopping, and a bounty of Pacific Rim cuisine. Fascinating and multicultural, the virtual melting pot of heritages, ideas, customs and cuisine forge together here on O’ahu. After plenty of improvements and updates, Waikiki Beach is a posh, global town with swanky resorts and 5-star restaurants. There’s vibrant street activity as pedestrians drift in and out of upscale boutiques, bars, and restaurants. O’ahu has a thriving farmers market and swap meet and there is always a social gathering that brings in art, music, film, theater, and food. No doubt that O’ahu is the most social with energy that of any cosmopolitan city. 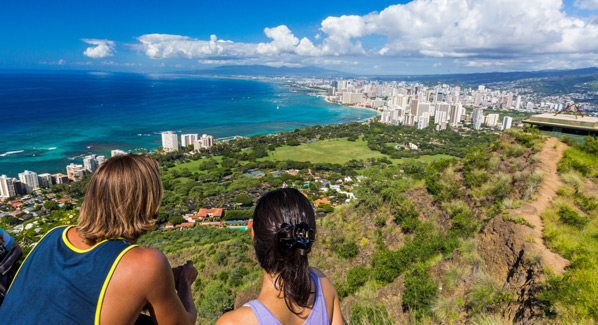 But the ocean lures here too; snorkeling, body surfing, and paddleboarding are for everyone. And, while out you may spot spinner dolphins and sea turtles. A drive along the west coast to North Shore tempts stops at epic surf beaches like Banzai Pipeline and Sunset Beach. Inspired? Take a lesson on easy, gentle rollers at Waikiki. Diamond Head trail trekked early in the morning for views of Honolulu and the Pacific, is a must on every trip. And, kayakers will want to explore the Mokulua Islands from Kailua Beach.