A vacation is supposed to be an escape from the day to day. So why join the crowds and flock to the same well-known destinations, where you’ll rub elbows with everyone else seeking a getaway. More savvy travelers seek that next great place, and they want to get there before the general public arrives. The rewards for this forward looking approach to travel are uncrowded beaches, pristine forests, a resort environment that is accommodating but not over developed, and a local vibe that treats visitors as welcome guests. And yes, these places really do exist, and we’ve rounded up seven of our favorite picks for 2018.

Anyone who longs for the South Pacific of Gauguin and Michener will be pleased to know it is alive and well on one of Tahiti’s less visited islands. Thirty miles east of the posh over-water bungalows of Bora Bora, the islands of Huahine Nui and Huahine Iti are a step back in time. These green islands are ringed in white sand beaches, and set within a turquoise lagoon. Lush forests cover volcanic slopes, and there are just eight small villages scattered across the islands. It is a land where things grow easily, and the rich soil yields bountiful harvests of vanilla, melons and bananas. Visitors come to trek the hills, ride bikes or horses on rural paths, snorkel the reefs and to sail, surf and swim in the clear waters. The tourism infrastructure is limited to a collection of small hotels and guesthouses scattered across the islands, with the crown jewel being the Royal Huahine hotel, which offers just 18 bungalows in a garden setting, tucked into a secluded bay accessible only by boat. 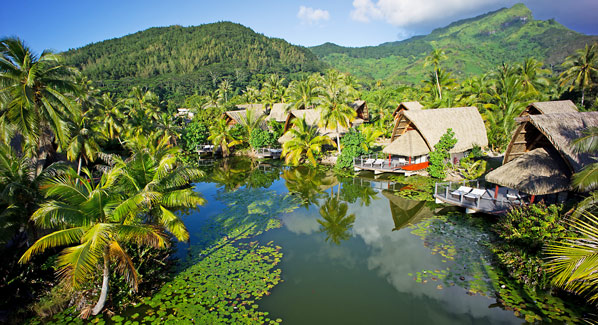 On the shores of Huahine, architecture details of Hotel Maitai Lapita take a cue from the region’s canoe culture, where bungalows are decorated with stylized canoe prows. Photo: Pierre Lesage/Flickr

Anguilla is an island for those who value both the finer things and the simpler things. Anyone who finds contentment in the simple act of sitting on a beach will be pleased to discover that this small Caribbean island is home to some of the world’s most beautiful powder white strands. Equally stunning are the aquamarine and turquoise hues of the waters, and this fact is not lost on the hoteliers who have built their upscale boutique properties on waterfront locations that deliver awe-inspiring vistas of sea and sky. The most recent example is the 25-room Manoah Boutique Hotel, which has been called the Caribbean’s most gorgeous new property. And then there’s the food. Foodies consider Anguilla to be the culinary capital of the Caribbean. At venues across the island, talented chefs with international reputations deliver an award-winning dining scene that showcases a range of elegance and creative cuisine, fusing fresh local flavors from land and sea with elegant international flavors. 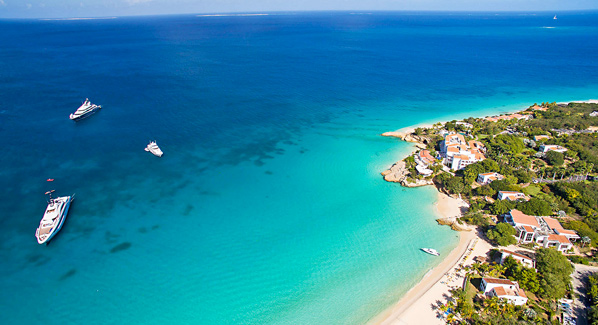 Oahu’s Waikiki Beach was where your parents went on honeymoon back in the day. But this most vintage of Hawaiian destinations is now infused with a new energy that pays homage to its roots, while also branding Oahu as the hip new place to be. Over the past few years, a number of vintage resorts in the Waikiki area have updated and reinvented themselves. Some have tapped into a retro-chic vibe while others have gone full modern. The latest such reimagining is taking place at the 315-room Queen Kapiolani Hotel, where a $30 million renovation is underway. The island’s culinary scene is also kicking it up a notch, with a growing number of kitchens opened by internationally known chefs, and a renaissance in regional cuisines. Look for trendsetter Peter Merriman to introduce farm-to-high rise cuisine at his latest Oahu restaurant, which will highlight ingredients grown and harvested from the Kualoa Private Nature Reserve. 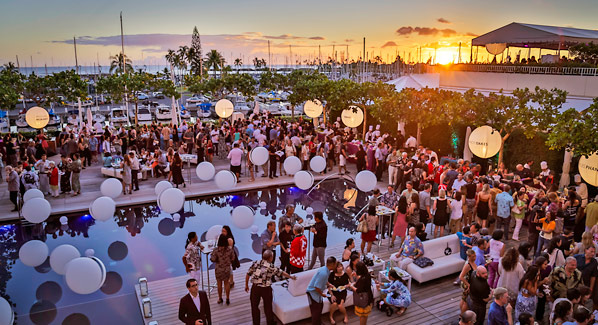 If you have no idea where the Azores is, you aren’t alone. Though technically a part of Portugal, these islands lie 1,000 miles to the west, in the middle of the Atlantic Ocean. It was only recently that regular and cost effective flights became widely available, which has in turn sparked a new wave of interest from travelers looking for the next great destination. Just don’t expect white sand beaches, though there are a few palm trees. The big attraction in the Azores is the rugged volcanic landscapes, where green clad slopes rise into the clouds, and clear Gulf Stream waters temper the mid-Atlantic climate. The islands offer a wide range of activities, from whale watching and swimming with dolphins to mountain climbing and trekking, bathing in hot spring waters, golf, and more. Culture is also a big attraction, as the islands are steeped in Portuguese traditions and architecture. The island of Sao Miguel has responded to the tourism boom with new properties such as the five-star Hotel Azor, while other islands in the chain still favor smaller properties and rustic guesthouses. 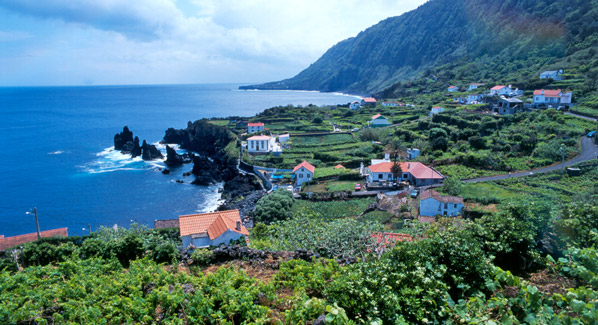 The bad news: the world has discovered the magic of the Gili Islands. The good news: the magic is still there. This trio of pint-sized islands sits just off the western tip of Lombok, Indonesia, where they are just a short flight and a boat ride away from Bali. Once known only to the intrepid backpacker crowd, the Gilis epitomize the iconic dream of a tropical island paradise, where coconut palms arch over sugar sand beaches washed by turquoise seas. And though mainstream tourism has now arrived, it has not spoiled the destination’s languid out island charm, and it has not come to all islands in equal measure. This allows visitors to have a sampler’s choice of vacation experiences. The most cosmopolitan of the three, Gili Trawangan, offers a lively beach club scene on its eastern shore, while the quieter west coast is devoted to small, upscale resorts. Cars are banned from all three islands, so be prepared to walk, bike or hire a ride on a passing horse cart. At the other end of the spectrum, quiet Gili Meno sees only a handful of visitors, and is home to just a handful of small, secluded resorts. It’s a place for those who want to escape the world. In between is Gili Air, an island that many feel offers the “just right” mix of development and seclusion, where backpackers are still welcome among a growing number of in-the-know jet setters looking for a quiet getaway. 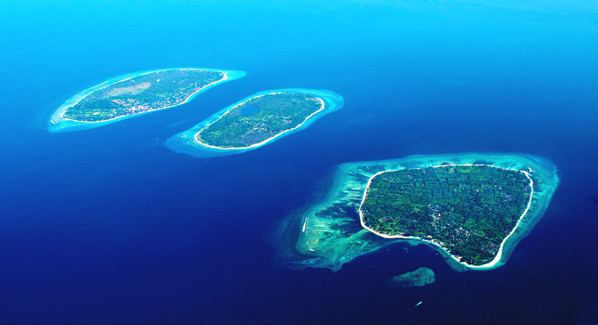 The Gili Islands rise from the Indian Ocean like a trio of emeralds set in a field of sapphire. Located an hour from Bali, these islands are just gaining the attention of savvy travelers. Photo: Flickr

The island of St. Kitts is attracting a new class of travelers who value both luxury and nature in equal measure. They are rewarded by a landscape that remains blissfully free of high rise hotels and beachfront sprawl, and in instead graced with a limited number of premier resorts designed to complement the island’s character. Long after other Caribbean destinations turned to tourism, St. Kitts remained a society of farmers and fishermen. It wasn’t until the early 21st century that cane harvests gave way to resort development. Today, this late bloom has yielded a crop of unique and upscale properties that blend into the island’s natural surroundings, without overwhelming it bucolic culture. One prime example is the Kittitian Hill project, which is based on the value of environmental and cultural preservation, and includes unique resort properties such as the cottages of Belle Mont Farms. 2017 saw the opening of the upscale Park Hyatt, which is set in the marina village of Christophe Harbour, and on the horizon is the $120 million Seaview Gardens Hotel Project, which will include a 350-room hotel. In contrast to these projects, the majority of St. Kitts remains green and untouched, and more than a quarter of the island has been designated as a nature preserve. 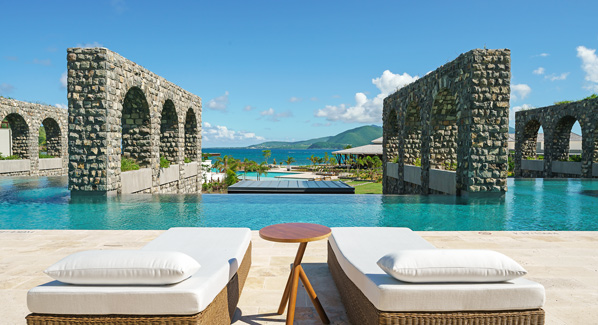 The Canal. That’s all that most people know about the Central American nation of Panama. Savvy travelers share a different reality. They sail to small, deserted islands off the Pacific Coast; they hike in mountain forests that are the equal of anything Costa Rica has to offer; they surf Caribbean waves, then lounge in hammocks on the over-water decks of eclectic eco lodges overlooking a lagoon. It’s not your usual resort scene, and that’s okay with locals. In fact, Panama’s new PR campaign counsels that it is a destination that is “Not for Tourists.” For those who consider themselves travelers rather than tourists, this is a good thing. But it’s not all thatch-roof beach bungalows and jungle lodges. Those looking for a touch of luxury— possibly before or after an up country adventure—will find it in the boutique hotels of Panama City’s historic district, the upscale high rises along the city’s waterfront, and the beach resorts of Playa Blanca. Regardless of style, those in the know agree that Panama provides a just- right combination of sophistication and adventure that can be enjoyed all the more because it is a destination that has not yet appeared on the mainstream travel radar. 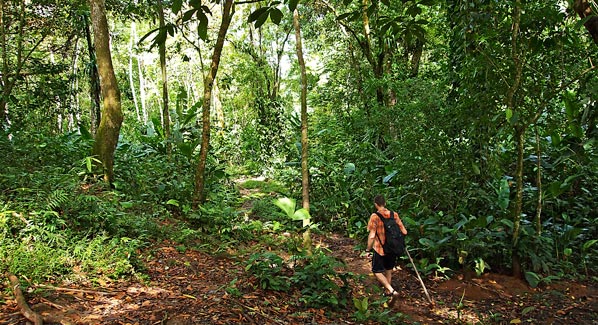