Some three decades after my trip to Cozumel, I was back for the umpteenth visit – but for the first time in nearly five years. I knew there would be changes and new development, but hoped that the island still retained its laid-back, small town vibe. Like many Caribbean destinations, Cozumel has become a major stop on the cruise ship circuit, and there are occasions when six or more of the big ships arrive at the same time to disgorge up to 10,000 day-trippers.

To really experience all the island has to offer, you need to stay a while. Some longer-term visitors escape to one of the upscale resorts that lie well south of the town of San Miguel. These properties become oases of leisure that cloister guests in a wealth of all-inclusive indulgences and diversions, but they also remove you from the local essence of the destination.

Rather than head south, I checked in to the Cozumel Palace. This downtown landmark was originally known as the Hotel Plaza Las Glorias. After it was acquired by the Palace hotel group, it underwent a full renovation that transformed this 176-room property into an all-suite hotel with luxury touches such as two-person Jacuzzi whirlpools, a full-service spa, two infinity-edge pools and four specialty restaurants. Dollar for dollar, the Plaza represents one of the best values on the island. Like many Cozumel resorts, the Palace offers an all-inclusive rate plan that covers all meals. But don’t think warming trays and buffet lines, because the Plaza’s culinary team takes things to the next level, and no matter which of the resort’s dining venues you opt for, you’ll enjoy cuisines that are a level above the expected. 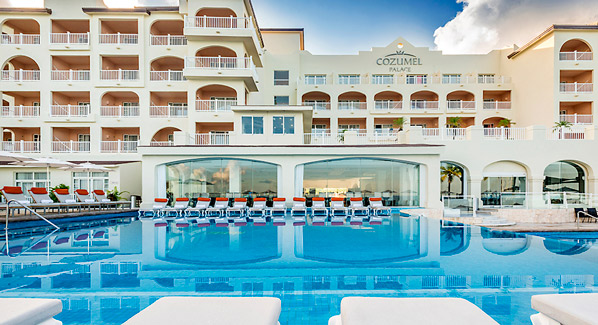 The landmark downtown hotel now known as the Cozumel Palace has been upgraded and transformed into one of the island’s more luxurious options. Photo: Ione Ascanio Green/Cozumel Palace

Another reason for staying at Plaza was its walking distance location to downtown San Miguel. When you walk the waterfront, you may think there’s nothing more to this town than timeshare kiosks and duty-free shops. But as you explore a few streets inland, you’ll begin to discover a variety of eclectic and low-key shops that don’t just serve the cruise ship crowd. Cozumel is Mexico’s equivalent of Key West, and it has long attracted artists and artisans from all parts of Mexico. One of the best known is Galo Ramirez. Though originally from Mexico City, Galo has been a fixture of the Cozumel art scene for more than 25 years. His work in acrylics, charcoals, and oils often depicts subjects such as jazz musicians or island scenes, and he is also an accomplished sculptor. He and his equally talented wife Niurka live and work at their studio on 25th Avenue, where he welcomes all who drop in. 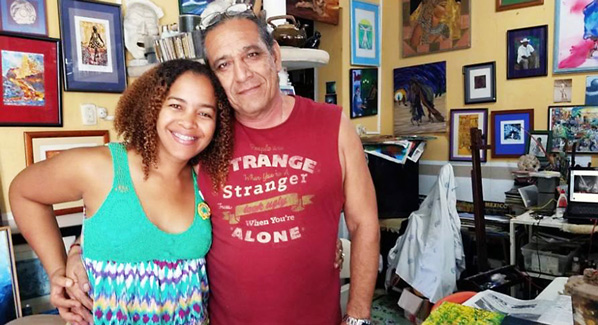 There are a number of charming local eateries to be discovered when wandering the back streets of San Miguel. As you might expect, there are quite a few that serve traditional Mexican dishes and regional cuisines, and two worth checking out are and Diegos and Pescadaria San Carlos. When looking for a change from the usual regional fare, my favorite find is La Cocay on Calle Ocho Norte. Slightly upscale but completely unpretentious, this local favorite serves a savory Mediterranean menu, accompanied by a respectable wine list and live music on certain nights. Closer to the central square, the corner bistro known as Le Chef is famous for it’s fish burgers and lobster/bacon sandwiches, while a stroll to the south side will bring you to Chocolateria Isla Bella. This family-run confectionary creates fresh and tempting chocolate creations each day. 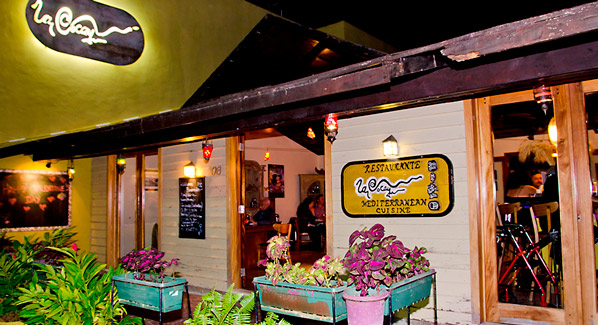 Locals and in-the-know visitors to Cozumel tend to avoid the waterfront restaurants in favor of venues such as La Cocay, which is located a few blocks inland. Photo: Pierce Hoover

The Return of the Locals

One of the more charming aspects of life on Cozumel has always been the evening activity around the central waterfront square. As night falls and the cruise ships depart, the town folk would gather on the square, often to the accompaniment of a band playing in the landmark gazebo. In 2016, the square was given a major facelift, which included the removal of the old bandstand in favor of a larger stage. Some decried these changes as the end of an era. An evening stroll from the Cozumel Palace revealed that this wasn’t the case. Families, young couples and old friends could all be found taking in the night air, and children were playing in the square’s latest addition, which is a lighted display of dancing water fountains. Similar activity was taking place at Quintana Roo Park, which is adjacent to the Municipal Palace. Here, parents and grand parents bring youngsters for a lively scene includes food carts, vendors, face painting booths and nightly concerts. 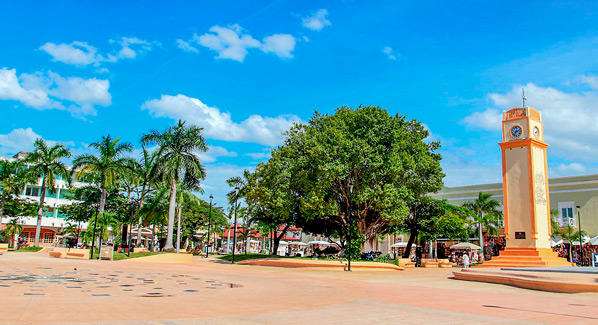 The clock tower is one of the enduring landmarks on Cozumel’s central plaza. At night, this area becomes a gathering point for locals, and often features live music. Photo: Pierce Hoover

Though the Cozumel Palace is a waterfront hotel, like many similar properties located on the island’s north and central coast, it lacks a true beach. Cozumel’s best beaches lie several miles to the south. Some stretches of sand are accessible only to guests of the cloistered resorts scattered along this coast, but others are the sites of beach clubs. These venues cater to daytime visitors, with amenities that go beyond beach chairs and restrooms to include full-service bars and dining, water sports and entertainment. The key to a good day at a beach club is avoiding the crowds that taxi down from the cruise ship docks. To maintain personal space on the sand, some clubs limit the number of guests admitted. This is the case of what I consider the island’s current best club, which is known as Nachi Cocom. This waterfront day park sits on the north end of San Francisco Beach, flanked by jungle on each side, and facing the snorkel and dive sites of famed Palancar Reef. Daily capacity is limited to just 130 guests, who enjoy water sports, beach massage and a four-course lunch. 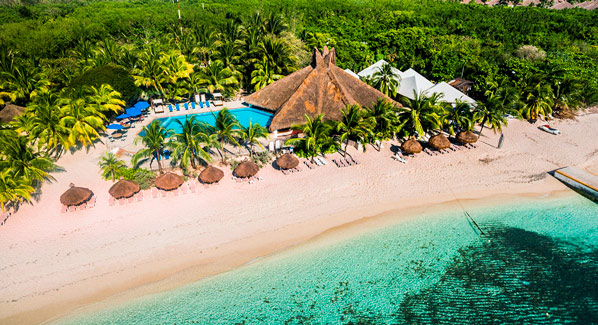 A select number of beach clubs such as Nachi Cocom are scattered across the island’s southwest coast. This area combines calm water with some of the island’s best sand beaches. Photo: Nachi Cocom

It was scuba divers who first put Cozumel on the travel map. Beginning in the 1970s, the first wave of traveling divers returned from the island with stories of tall coral reefs covered in rich growths of multi-hued sea fans and sponges. By the late 90s, Cozumel had grown into one of the most popular diving destinations in the Caribbean, with more than 90 individual dive operators on the island. Too often, this sort of popularity can spoil the very things that make a place special. Not so with Cozumel’s reefs. Thanks to decades of protection within a marine park, and a constant flow of nourishing oceanic water, the reefs are in excellent health, and rich with fish life. 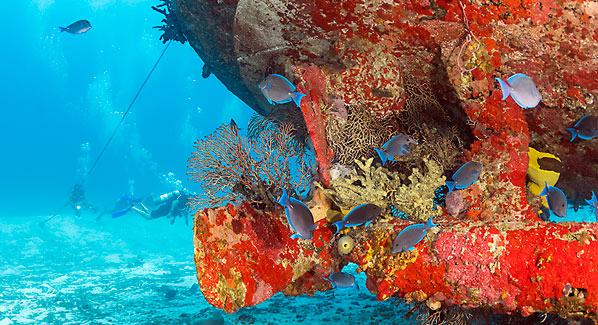 The shipwreck known as the Felipe Xicoténcatl is a former Mexican naval destroyer that was sunk intentionally as a fish haven and attraction for scuba divers. Photo: Walt Stearns

I never miss a chance to dive and snorkel when on Cozumel, and on this latest visit, I started with an exploration of the island’s signature shipwreck, the Felipe Xicoténcatl, which is now home to a very large moray eel. The following morning, I boarded the Aqua Safari boat for a longer trip to the southern reefs. The most famous of these is Palancar, where a wall-like line of coral formations rise two stories above the sand, and are riddled with a maze-like network of canyons and tunnels. After the dive, we moved closer to shore to join the fleet of snorkel boats that visit sites in the National Coral Reef Marine Park.