These celeb chefs have taken their talents to the tropics and opened restaurants in top resorts.

If you’re a foodie, or perhaps a Food Network junkie, who tracks celebrity chefs, then this list is definitely for you. Find your favorite toque’s restaurant and book a vacation where you can combine play and relaxation with glorious food from the kitchens of Michelin-star and James Beard-award winners.

One & Only Ocean Club, Bahamas 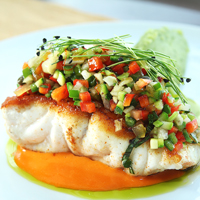 French Asian fare is what put chef Jean-Georges Vongerichten on the worldwide culinary map. Inside the intimate One & Only Ocean Club on Paradise Island in the Bahamas, his Dune restaurant, aptly named for its location on the edge of puffy white sand dunes, features dishes true to course and some with a Bahamian edge. How about chicken coconut soup with galangal root and shiitakes, or local lobster with a curry sauce and fried plantains? His roasted grouper with aromatic vegetables is another hit. Slat shutters, touches of rattan and bird of paradise flowers on the tables give the dark wood dining room a tropical flair.

Matching the elegance of Vongerichten’s food are the accommodations at the One & Only Ocean Club. Once a plantation house and part of the estate of A&P supermarket heir Huntington Hartford II, the property has an air of exclusivity. A manicured green lawn dotted with feathery coconut palms leads to blue waters. Guest rooms have polished dark wood floors and shutters that contrast subtly with a more modern decor of colonial rattan and warm earthy tones. Mosaic-tile Roman tubs elevate bathrooms to a new status. Rounding out the offerings are a golf course that resembles a work of art with perfectly shaped water hazards and islands, and a Balinese-style spa and garden that serves as a sanctuary for R&R. 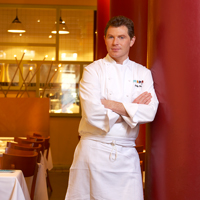 Chef Bobby Flay, America’s barbecue guru and TV personality, has set up shop in the Atlantis resort, where at his Mesa Grill he turns out Southwestern-inspired dishes like blue corn pancakes with barbecued duck, Scotch Bonnet chili pepper and star anise sauce. Other more Bahamian-influenced dishes, such as a conch salad with orange-chipotle vinaigrette, appear on his menu as well. Earthy stone walls and copper accents give the dining room a warm glow, and the seashells in the décor remind diners that they are indeed on a tropical island. Foodies find more big-time toques at Atlantis. Flay shares the celeb-chef limelight with: Japanese chef Nobu Matsuhisa (Nobu restaurant) and chef Todd English, with his Mediterranean cuisine (Olives).

The term mega resort may be an understatement for this property. With six locations to choose from, all with accommodations at different price points, Atlantis is more like a city rising up on a spit of land. Think very tall towers with gorgeous views. But then there’s the 141-acre water park with a tube slide submerged in a lagoon where shark happily swim about, 11 pools and three beaches. And of course there’s a plethora of water sports, and dare we forget the casino. 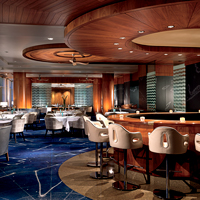 When it comes to culinary expertise in seafood, chef Eric Ripert is the man. Whether appearing on a chef-driven television show, in his New York flagship restaurant Le Bernardin or at Blue in the Ritz-Carlton on Grand Cayman island, he’s whipping up something plucked from the sea. At Blue his ceviche, made with local conch, passionfruit, citrus and avocado, is more than to die for. His poached halibut with black truffles may impress, but how he pairs cobia with the tropical flavor of coconut and a spicy sambal sauce is reason to book a table. With its contemporary, sultry décor, Blue is pure class, where—sorry gentlemen—sandals and shorts are not allowed.

A stay at the Ritz-Carlton puts you on the edge of the whitest sand and water that blends every shade of blue. The best spot is in one of the raised-platform cabanas facing the sea. The rooms combine traditional with modern and splashes of abstract orchids perk up the walls. Best part: The view of the Seven Mile beach from the balcony is breathtaking. 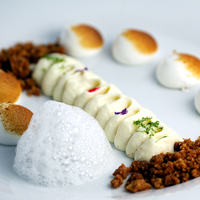 Master of small plates, Spanish chef Jose Andres debuted on South Beach in 2013 at one of the hottest hipster spots on Collins Avenue: the SLS Hotel. At his Bazaar restaurant, wild drink concoctions like the LN2 Caipirinha, prepared with Brazilian cachaça rum and served with billowing smoke from liquid nitrogen, add drama to an already pumped-up atmosphere. Spanish tapas take a cue from Miami’s Latin kitchens with dishes like croquetas de pollo and empandillas de bacalao. High ceilings make the dining room feel larger than it is, and the constant traffic of hotel guests and diners becomes a fashion walk, making this a see-and-be-seen kind of place.

A room at this art-deco hotel promises swirls of white sheers and toile wallcoverings that create a dreamy cocoon, plus pink-tinged mirrors and glass. The whimsy carries through to the swimming pool, where a 9-foot-tall fiberglass ducky serves as both art and a hint that the pool water just might be as warm and inviting as the H2O in your bathtub. 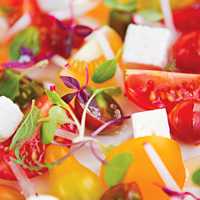 Wolfgang Puck’s bold Spago logo hangs over the entrance to his restaurant on Maui. Part of the Four Seasons resort, the leisurely space with its air of sophistication is the place where the chef deviates from his famous meatloaf to embraces Hawaii’s local flavors and create dishes like grilled mahimahi with ginger barbecue sauce, Maui onions and grilled local pineapple. The sweet opakapaka found in waters surrounding the Hawaiian Islands shows up on his menu pan-roasted and served with lobster-crusted potatoes. With more windows than walls his white-tablecloth restaurant has views of the island’s big sky and rising mountains.

Luxury is a given at any Four Seasons resort, but this one on Wailea Beach boasts the largest guestrooms—and oversize bathrooms—on the island. Expect floor-to-ceiling marble in the full baths, and a crisp gold-and-white color scheme in the rooms. And no matter which guestroom you book, you’ll have a view of the mighty ocean, junglelike gardens or lofty mountains to enjoy during your stay.

At the intimate Café Boulud tucked in the Brazilian Court, chef Daniel Boulud does his magic. Credited with reinventing French food into what he calls French-American, Boulud delivers classic French dishes like Burgundy Escargots, as well as creations inspired by the farmers market like a roasted beet and mâche salad with cashew butter and pickled mango yogurt dressing. The boutique resort’s pretty courtyard converts to alfresco dining in the evening. Book a table a few steps up from the cherub fountain where you’ll have a view of the garden’s tall palms and tropical plants that wrap the outdoor area. After dark, the setting is especially breathtaking with lighting that creates a romantic mood.

The Spanish-style resort has 80 studios and suites, all designed with European flair. Mahogany crown molding, French doors, Provence-style shutters and beamed ceilings blend with old-world furniture. Beds with super-thick mattresses, dressed in 1,000-thread-count sheets, are a plus. A chauffeur delivers guests to the private beach club on the Atlantic Ocean, where lounges and cocktail service await.