When visiting the Hawaiian Islands, make sure to check out these local foods

If your idea of Hawaii cuisine is tropical fruits and luau food, you need to expand your culinary horizons. The islands have long been a cultural mixing pot, with culinary influences from around the world blending to create a slew of unique-to-the-islands dishes and drinks you can’t find anywhere else. If you are ready to discover the diverse tastes of Hawaii, here are some of our favorite starting points.

The most iconic meal in Hawaii is called the plate lunch, an un- apologetically starch-heavy combination that dates back to the plantation period. The meal consists of two scoops of white rice, another of mayonnaise-based macaroni salad and some kind of entrée, which can range from teriyaki beef to pork adobo. The best place to sample one of these simple meals is at Rainbow Drive-In (3308 Kanaina Ave., 808-737-0177, www.rainbowdrivein.com) in Kapahulu, less than a mile outside of Waikiki. The landmark restaurant first opened in 1961 and is one of the few remaining drive-ins from this era. It’s been a favorite of residents for generations, though a recent stint on Food Network’s ‘Diners, Drive-Ins and Dives’ with Guy Fieri (who eats the fried chicken here whenever he’s in town) has put the drive-in in the guidebooks. And because of its proximity to the beaches in Waikiki, it’s a popular stop for surfers and beach-goers, who often arrive in beachwear for their fix of burgers, fries and the drive-in’s famous Slush Float. While it serves a variety of plate lunches—from hearty chili to chicken cutlets smothered in brown gravy—the most popular is the mix plate, featuring beef or pork teriyaki, a breaded chicken cutlet and mahimahi. There’s lots of parking at the drive- in and next door, but expect a crowd at lunchtime with lines spilling into the parking lot. 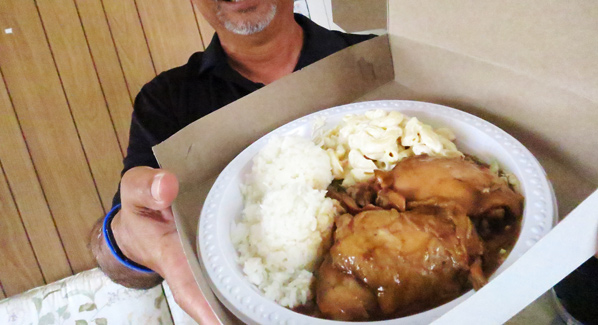 Oahu’s Rainbow Drive-In serves up traditional plate lunches. These date back to the plantation days, when workers sought a simple yet filling mid-day meal to fuel their labors. Photo: Catherine Toth

A popular snack found in most convenience stores in Hawaii is the Spam musubi —a block of white rice topped with a slice of grilled Spam, wrapped together with dried seaweed. Sometimes the musubi comes paired with egg, other times the Spam is flavored with teriyaki sauce. Hawaii has a long history of affection for the pink canned meat. Residents eat nearly 7 million cans of Spam a year, according to Minnesota-based Hormel Foods. That’s more than any other state in the nation. One eatery has perfected the snack. Tanioka’s Seafoods & Catering (94-903 Farrington Highway, 808-671-3779, www.taniokas.com) in Waipahu in Central Oahu prepares a Spam musubi that has quickly become one of the most popular items on the menu. The Spam is seasoned with a sweet teriyaki sauce that ramps this musubi to another level. These grab-and-go treats are located right at the cash register at Tanioka’s. But you have to go through a line to get there, passing display cases of poke, fried chicken, shortbread cookies and other local favorites. There isn’t anywhere to eat in or outside, so you’ll have to drive somewhere to enjoy your treat—we recommend visiting the nearby Hawaii’s Plantation Village (95-695 Waipahu St., 808-677-0110, www.hawaiiplantationvillage.org) in Waipahu, where you can walk around a restored plantation village that tells the story about Hawaii’s multiethnic history. 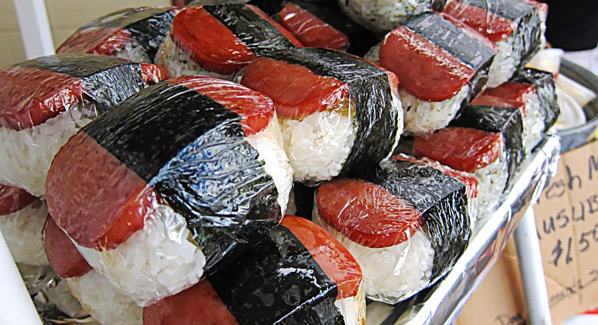 Spam musubi is a popular grab-and-go snack found all across Hawaii. Slices of flavored Spam provide the signature ingredient, which is paired with rice and wrapped in seaweed. Photo: Catherine Toth

Of the favorite types of pupu, or appetizer, in the Islands is poke (pronounced poh-kay). This consists of cubed ahi (yellow fin tuna) marinated in sea salt with shoyu (soy sauce), inamona (roasted crusted kukui nut), sesame oil, seaweed and chopped chili pepper. And it’s a fixture everywhere, from high-end restaurants to grocery stores. (Even Costco sells poke.) There are many variations of this dish, ranging from raw salmon to cured octopus. Try any of the ones served at Poke Stop (95-1840 Meheula Parkway, 808-626- 3400, www.poke-stop.com) in Mililani in Central Oahu. Here, you can even get a poke bowl with seared ahi served over kim chee- flavored fried rice. It’s a small shop located behind a McDonald’s, with some seating inside. While poke is its specialty, you’ll likely smell other dishes like garlic shrimp or grilled rib eye steak cooking up in the kitchen. Don’t be surprised to see owner Elmer Guzman prepping in the kitchen or his young daughters helping out in the dining area. 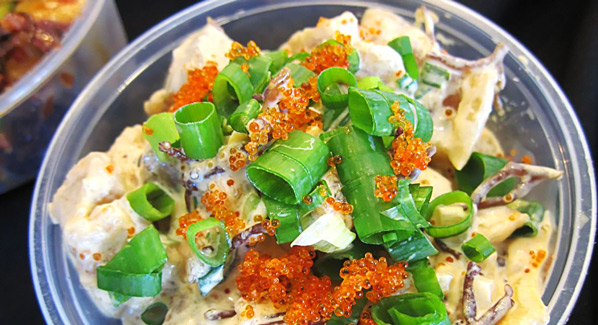 From high-end restaurants to supermarkets, you can find poke on every menu. The dish is typically marinated seafood topped with seaweed, chili peppers and even fish roe. Photo: Catherine Toth

This is a noodle soup dish that came out of Hawaii’s plantation era. Drawing on the influences of Japanese ramen, Chinese mein and Filipino pancit, it is a curly egg noodles in a hot broth. One of the best bowls is on Kauai at Hamura’s Saimin Stand (2956 Kress St., Lihue, 808-245-3271), which uses locally made noodles. This old-fashioned saimin shop has been around for about 70 years and still popular as ever. Its long, S-shaped community table is almost always packed with diners, sitting on wooden stools and huddled over their bowls of steaming hot saimin. You can watch the longtime workers prepare the broth and noodles right in front of you in the open kitchen. The most popular is Hamura’s special saimin topped with luncheon meat, roast pork and veggies. 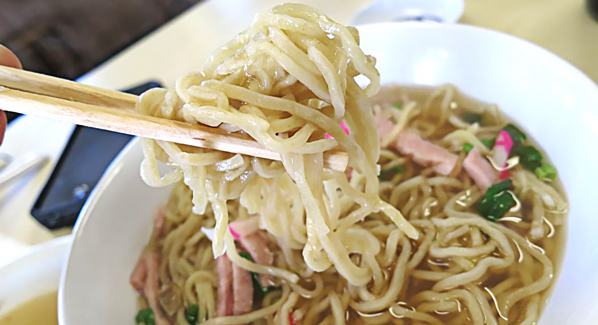 Saimin is an Asian-influenced noodle soup turned Hawaiian. It consists of soft egg noodles immersed in a hot broth. Garnishes can include a variety of meats and vegetables. Photo: Catherine Toth

A favorite libation in the islands, the Mai Tai is a combination of light and dark rums, lime, orgeat and curacao or triple sec. It was purportedly invented in 1944 at the Trader Vic’s restaurant in Oakland, California, but it soon became associated with Hawaii. The original concoction is vastly different from the imitations served in many restaurants and bars. The 1944 drink, which means “good” in Tahitian, used J. Wray & Nephew Jamaican rum, fresh lime juice, orgeat (an almond syrup with French origins), orange curacao and sugar syrup. There’s only one bottle left in the world of the Jamaican rum, so modern bartenders use various rums instead. The Royal Kona Resort hosts Don the Beachcomber’s Mai Tai Festival, which lures about two dozen mixologists who blend their best recipes in the hopes of winning $10,000. But you can find Mai Tais on just about any menu in Hawaii. The oceanfront House Without a Key (2199 Kalia Rd., 808-923-2311, www.halekulani.com/dining/house-without-a-key) at the posh Halekulani in Waikiki boasts a popular Mai Tai, perfect for sipping at sunset. Go in the evening and grab a seat outside, facing the Pacific Ocean, and listen to live Hawaiian music with hula dancers gracefully moving under a century-old kiawe tree. The refreshing drink is perfection in this atmosphere. 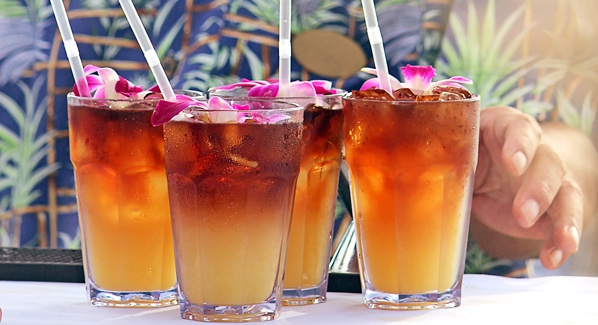 Though thought to have originated in California, the Mai Tai has long been associated with Hawaii. With slight variations, the drink combines one or more rums, fruit juices and syrups. Photo: iStock

You likely won’t find this dish—or a variation of it—anywhere but Hawaii. Another product of the plantation culture, the loco moco is just white rice topped with a hamburger patty (or two), an egg and brown gravy. It was first created in Hilo on the Big Island, where you can still get one of the best versions of this dish at Café 100 (969 Kilauea Ave., Hilo, 808-935-8683, www.cafe100.com). This old- time drive-in serves more than 30 different kinds of loco mocos, including one with fish and another topped with homemade chili. It started serving loco mocos in 1949 and now sells about 9,000 of them every month. The menu on display is dizzying, so take your time. Like Rainbow Drive-In, Café 100 has take-out windows but with some open-air seating where you can feast on your loco moco plate. This is a popular stop for Hilo residents seeking a quick bite to eat, though more visitors are finding it despite its location off the main highway. If you’re on Kilauea Avenue, you can’t miss it, with its name in huge red letters on a wooden facade. 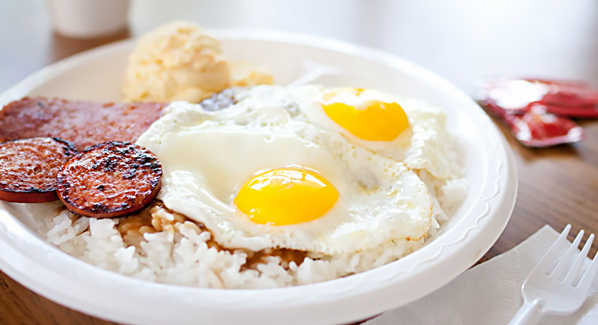 Loco moco is one of several distinctly Hawaiian creations that pairs a serving of rice with one or more protein toppers. This example comes from Cafe 100 in the town of Hilo. Photo: Catherine Toth

This popular Portuguese dessert is simple: it’s just fried sweet dough doused in white sugar. But few have perfected the art of making these round, sugary donuts. While Leonard’s Bakery in Kapahulu on Oahu is the most well known bakery to specialize in these fried treats, Agnes’ Portuguese Bake Shop (46 Hoolai St., 808-262-5367, www.agnesbakeshop.com) in Kailua on Oahu’s windward side whips up the most authentic version—complete with the traditional hole in the middle. The malasadas here are made to order and coated generously in white sugar. It’s located in a parking lot shared with a couple of other shops. There are display cases features other baked good such as bear claws, apple fritters, jelly donuts and scones. Grab a cup of freshly brewed local coffee and take a seat while you wait. Since the malasadas are made to order, it might take a few minutes. 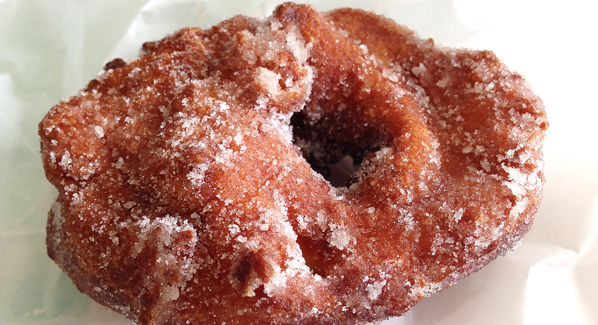 A close cousin to the donut, the Malasada originated in Portugal. These savory chunks of sweet fried dough are coated in sugar, and may or may not have central holes. Photo: Catherine Toth

Hawaii’s version of this icy treat is nothing like the chunky snow cones served on the mainland. Shave ice—also called ice shave on the Big Island—has a finer consistency, and more completely absorbs the sweet syrup toppings, which come in flavors ranging from strawberry to piña colada. Most shave ice stands like Matsumoto Shave Ice on Oahu’s North Shore and Ululani’s Shave Ice on Maui top these desserts with homemade mochi (sweet glutinous rice), red azuki beans and sweetened condensed milk. But if you’re looking for something truly unique, visit Shimazu Store (330 N. School St., 808-371-8899) in Honolulu. This small hole-in-the-wall boasts more than 50 different flavors including lychee, red velvet crème, durian and creme brulee. This shave ice shop is in a former neighborhood grocery store. It’s tiny inside, and you’ll likely have to eat on the small bench just outside the door. The workers will make your shave ice to order right before your eyes, including shaving the ice. 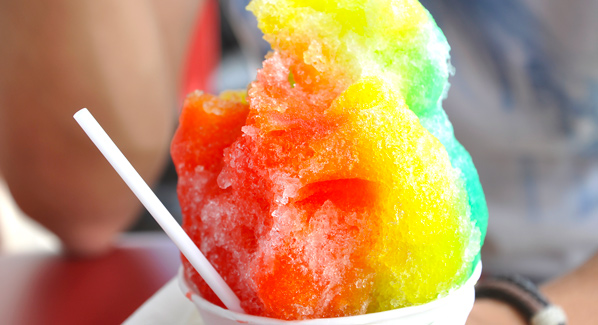