There was a time when a Caribbean restaurant that provided matching forks was considered to be putting on airs. No more. Today, dozens of celebrated dining rooms across the region plate superb offerings that fully justify upscale cutlery and fine china. Celebrity chefs have opened signature eateries gone island style, and a new wave of homegrown talent adds local flair to established traditions. One can find a respectable range of fine dining options on nearly every island, but some stand above the rest in terms of the plentitude of choices and the overall experience.

Don’t let the fast food franchises that have popped up along West Bay Road fool you. An island that was once a wasteland for fine dining enthusiasts has emphatically upped its game and become a food-first destination. There are culinary all-stars. Eric Ripert’s Blue at the Ritz-Carlton showcases locally caught seafood, complemented by an 800-label wine list. Michael Schwartz’s Genuine Food & Drink offers a casually elegant indoor/outdoor setting where the emphasis is on the chef’s signature New American cuisine. And the list of chefs and supporting casts keeps getting stronger. The lineup at the Camana Bay complex alone is enough to justify the airfare: Cindy Hutson’s Ortanique serves up highly personal recipes in a South Beach setting, and Mizu is a tour of the greatest hits of Asian cuisine. Across the island Kaibo at Rum Point has high-end cuisine and a world-class rum bar. And these venues just scratch the surface of the island’s vibrant restaurant scene. 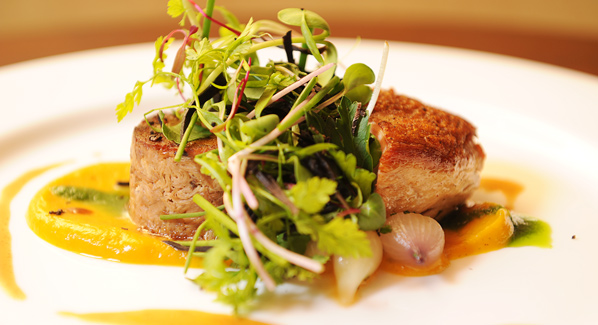 It’s French and it attracts a lot of people with money—enough said? Well, not quite enough. St. Martin has earned a reputation as the fine dining capital of the Caribbean, and the caliber of culinary achievement displayed along Grand Case beach is both varied and stellar. L’Effet Mer weighs in with its trilogy of crab (crab tartar, crab cake and crab roll), sweet pepper gazpacho and duck liver; Le Pressoir impresses with frog legs Provençale, crispy snails and a tasting plate of four variations of foie gras; Mario’s Bistro is an institution, famous for its jumbo scallops with crab mashed potatoes and shrimp penne flambéed with bourbon. At L’Estaminet, Chef Ina Urfalino puts a personal twist on French culinary traditions with dishes such as duck breast au cacao, and mahimahi marinated in Guyanese masala. While the majority of cuisines favor French and French fusion, there are also flavors of Asia, Italy and the Caribbean that can be savored at more than 400 restaurants across the island.

While St. Martin is thoroughly French, Martinique—also an overseas department of the Republic—mixes it up. Even in its colonial days, Martinique was the more exotic creole sister of the Windwards, the African identity of its population complemented but never subverted by European customs. So while there’s plenty of excellent French cuisine to be had at traditional favorites such as Fort-de-France’s La Cave a Vins, there’s also a healthy serving of creole to go with it. Delices Caraibes serves up shrimp in coconut milk; Metis takes what the sea offers and gives it a twist with dishes such as snapper with basil or shrimp flambéed with rum. On the windward side, La Domaine Saint Aubin is a French- style “hotel du charme,” a 19th-century manor house with an enthusiastic and accomplished chef who takes full advantage of local ingredients, which are transformed into memorably orchestrated prix fixe dinners.