From roots to fusions, the music of the Caribbean was born on these islands where song and dance make for a rousing visit

There are going to be guys, and sometimes girls, wearing floppy hats and serenading you from the Jimmy Buffet songbook no matter where you go. Get used to it. But that’s hardly the beginning or end of Caribbean music. The combination of European melodies with African rhythms and forms like the call- and-response chorus melodies has sparked a rich musical culture that is unlike any other. The litany of musical forms that have been invented in the region goes on and on: salsa, son, danzón, rumba … and that only covers Cuba. Add merengue and bachata from the Dominican Republic, calypso and soca from Trinidad, Bahamian rake ’n’ scrape and of course, reggae from Jamaica. And then there are the instruments, from the iconic steel drum to the cajon, marimba, timbales, conga, güiro, and cuatro. As W.C. Fields once remarked about Mae West, the region is a “feast for the eyes and easy on the ears as well.”

Bob Marley. That just about covers it, right? Not even. The superstar and music legend took the sounds of his native Kingston and blended them into a musical form that connects with millions worldwide. And Marley was just one of many artists—Peter Tosh, Bunny Wailer, The Skatalites, Black Uhuru and Buju Banton—who made it to international fame. They’ve been followed by dancehall DJs, jazz players and more recent breakouts like Tessanne Chin, who won Season 5 of NBC’s The Voice. Finding music in Jamaica is easy. In Montego Bay, try the annual Sumfest (mid-summer) for an introduction to all of the sounds of the island or pop into a club along Gloucester Avenue anytime. 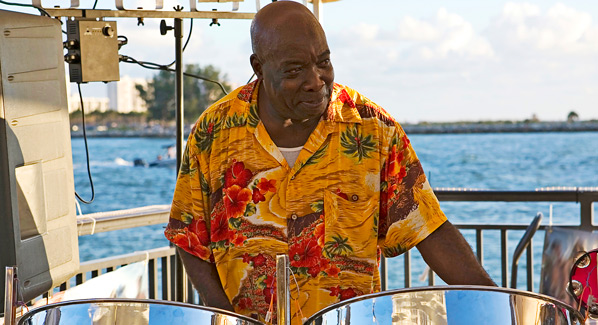 Steel-Pan, the Caribbean’s iconic music is found throughout the islands and prevalent at beach bars, hotels and restaurants like this oceanside venue in Jamaica. Photo: Lisa F. Young/iStock

Music is everywhere in Cuba, as are the people dancing. For a country that suffered so much for so long, it’s amazing how little it takes to get Cubans to break out into song and dance. It’s not only in their blood, it’s their national identity. Maybe this is what Wilson Pickett was singing about when he recorded Land of a Thousand Dances? If it’s not, it should have been. This is the birthplace of the rumba, the cha-cha, son and more beats that were heavily mined by American big band orchestras in the 1930s and 1940s. After Desi Arnaz pioneered a purer form of the music on the TV show I Love Lucy, it was the fusion sound of famous ex- pat Gloria Estefan that brought the Cuban beat to millions of American ears. If you want to hear what Cuba is doing now, Havana is still rocking it at places like Casa de la Musica or Cafe Cantante, while a more sedate experience awaits at Chan Chan, overlooking the Marina Hemingway in Miramar. 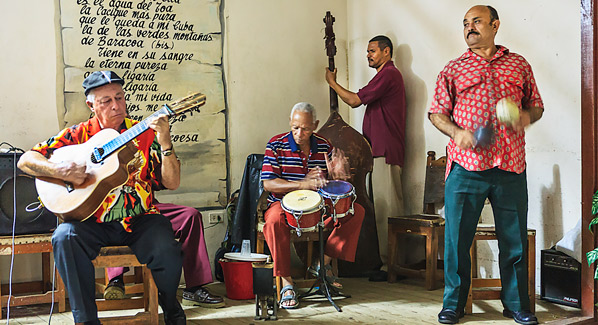 Iterate musicians known as trovadores once roamed Cuba. Their musical style lives on at performing halls known as “Casa de la Trova,” which can be found throughout Cuba. Photo: Flavio Vallenari/iStock

Like their Cuban neighbors, Puerto Ricans love to dance. And boy, can they dance. San Juan is chock-full of clubs that heat up as the nighttime air cools down. From Old San Juan out to Condado and down past Santurce into Rio Piedras, clubs are everywhere. Not surprisingly, salsa is on the menu in most, but there are so many variations—from pure salsa to music mixed with jazz or hip-hop— that you’ll never be bored. Reggaeton is extremely popular as well. If you go, expect to see some blazing musicianship and expect to sweat, because you can’t sit still listening to these bands. They’re easy to find, too. If there’s a concert at the Anfiteatro Tito Puente—a big venue named for the New York- born superstar—buy a ticket. Or head for the El San Juan Resort & Casino on the beach in Isla Verde and dress in your best. A less elegant but no less impressive atmosphere can be found at the Nuyorican Cafe in Old San Juan, where an 18th century mansion has been converted to a jazz, rock and salsa club. 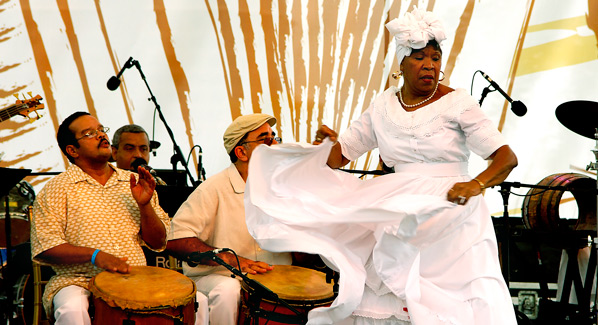 Puerto Rican Bomba music has roots in west African traditions. The rhythms are unique because the drummers follow the lead of the dancer rather than the other way round. Photo: Alfred Wekeloz/Shutterstock