There’s more to the Caribbean music scene than reggae and steel drums. All across the region, a growing number of festivals and concerts are added to the calendar each year. Initially, jazz was the focus of many such events, now world music is part of the mix and famous artists are heard in a diverse array of musical styles that include blues, dancehall, soca, new age jazz, fusion, R& B and more. Each event and each successive year out does the previous, upping the ante on talent, parties and attractions.

The year 2015 marked the 25th year for this local event turned international extravaganza, which takes place every March during the full moon. Hosted by local musician Bankie Banx at his beachfront bar, The Dune Preserve, the party pulls in big names in reggae, along with upcoming local talent. For more information and the lineup for next year visit www.bankiebanx.net

The premier of this three-day event on Nevis took place in 2015 with a stellar line-up of local and international talent. Nevis is a natural, intimate and relaxed island and the organizers created the Nevis Blues Festival to complement that vibe. Guests are immersed in island culture and enjoy local cuisine while relaxing to sounds of blues at the Sundowner Stage on Oualie Bay. For more information and tickets for the Nevis Blues Festival, visit www.nevisbluesfestival.com

This weekend-long celebration is filled with music, plenty of beach parties and boatloads full of revelers. A reggae concert kicks off an in-town block party. Later in the weekend the party moves to Cruz Bay’s beachfront and continues on boats that head to the British Virgin Islands. Local food, chef soirees and visits to local bars and restaurants are all on the agenda. Current dates, tickets and more information visit www.experiencelovecitylove.com

The quiet island of Tobago is surely on the map after the 2015 concert, which featured a stellar lineup of international artists including recording star and actress Jennifer Hudson, singer- songwriter Jill Scott and legendary R&B band Kool and the Gang. Performances take place on the coastal town of Speyside and move to Pigeon Point Heritage Park as well as other coastal spots around the island for a full week of music, culture and gastronomy. For the 2016 lineup and more information visit www.tobagojazzexperience.com

This five-day festival takes in the holidays around Memorial Day and combines Aruba’s tropical charms with rhythm and blues performances. The action takes place both day and night, with parties bouncing between the Moomba Beach and the Renaissance Aruba Resort. The majority of concert performances take place Friday through Sunday, leaving Memorial Day free for one last dip in the surf. The Soul Beach Amphitheater, the Havana Beach Club, the Hard Rock Café-Aruba are some of the main performance venues. For more information visit www.soulbeach.net 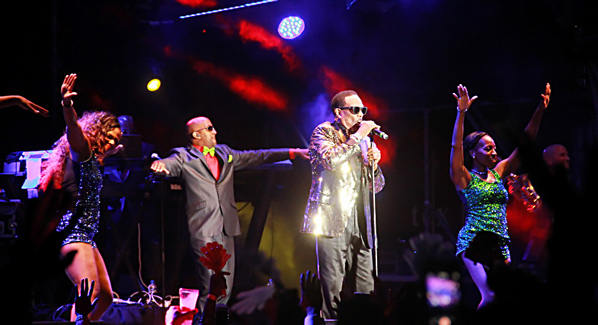 During the annual Soul Beach Music Festival, the island of Aruba moves to the sounds of Rhythm and Blues. Celebrating its 15th year, this event has been named one of the best celebrations in the Caribbean. Photo: Aruba Tourism Authority

The St. Lucia Jazz Festival started the trend of music festivals in the Caribbean over 20 years ago, and today it remains one of the most popular in the Caribbean, drawing crowds from both Europe and the United States. Since it inception in 1992, the festival has added a mix of popular acoustical, fusion and new age jazz, as well as soca and R&B. Once centered in the capital of Castries, the festival is now a week-long celebration of local culture, fashion and food, staged at venues across the island. The main stage is set on the peninsula of Pigeon Island National Park, with the sea as a backdrop. For more information visit www.stluciajazz.org

New on the circuit in 2015 was the inaugural Curacao International BlueSeas Festival. Attracting a veritable “who’s who” of modern blues artists, the event was labeled a celebration of “traditional and gentrified” jazz music. Performances were staged at Kleine Werf in downtown Punda, and a free two-day street festival in the historic Pietermaii district. With this entree into the world of the blues, Curacao has staked its claim in the Caribbean music festival scene. For more information visit www.curacaoblueseasfestival.com

Another longtime favorite event that will hit the 20-year mark in 2016 is the extravaganza that takes place at Warner Park Stadium on the island of St. Kitts. The lineup includes a range of musical styles including R&B, jazz, hip-hop, reggae, rock, calypso, gospel and contemporary. Past performers include John Legend, Lionel Richie, Michael Bolton, K.C. and the Sunshine Band, Damian Marley and Shaggy. For more on this event go to stkittsmusicfestival.com

This Montego Bay event attracts tens of thousand of reggae fans and includes music born out of Jamaica. Reggae pulls in the masses but hard-core lovers of the island’s many musical styles will be in heaven when they hear and move to ska, dub and dancehall. Top Caribbean bands and international talent headline the event. Evening events take place at the Catherine Hall Entertainment Complex, which is an outdoor arena. The final day is a beach party. For more information visit www.reggaesumfest.com 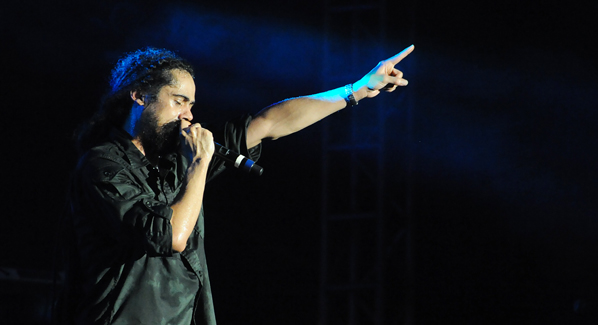 This annual event begins with a four-day warm up of performances staged at smaller venues, all leading up to the weekend’s main event. Come Friday, a full-on lineup of international and local jazz, Latin, soul and funk musicians take over the Renaissance Market Place in Oranjestad. Local bars, restaurants and food stands join in the fun with special festival menus and libations. Past events have featured George Benson, David Sanborn, Willie Garcia, Roberta Flack and Chakan Khan. This year the first band to ignite the festivities is Earth Wind & Fire. For additional information and tickets visit www.caribbeanseajazz.com

This popular event has been pulling in talent and crowds for the past several years. The event draws enthusiasts from all over the world and has been praised for showcasing an eclectic mix of sounds to please pop revelers and die-hard jazz fans alike. This year’s line up will include John Legend, Enrique Iglesias, Usher, Wyclef Jean, Lionel Richie, legendary salsa vocalist Oscar D’León, British soul sensation Emeli Sandé, and the R&B group, The Pointer Sisters. Performances take place at Curacaos’ World Trade Center in Piscadera Bay. For tickets and more information visit www.curacaonorthseajazz.com

An eclectic mix of music comes to the Nature Island with a festival that has been steadily increasing in size and popularity since its inception in 1997. The festival includes local celebrations and takes place during the island’s Independence Day, so everyone gets involved. Music traditions such as zouk, soukous and bouyon join reggae, calypso and soca tunes to keep crowds dancing and grooving through the three-day event. Outdoor venues such as the Botanic Gardens and the Layou River often become the site of free performances and family-oriented activities for both locals and visitors. For tickets and schedule visit www.wcmfdominica.com

Five of the Caribbean’s Best Beach Bars for Live Music

Mango Festivals in the Caribbean