From guided reef tours to secluded sites, there's something for snorkelers of all levels

The clear, enticing waters of the U.S. Virgin Islands beg for exploration with mask and snorkel. And thanks to geography, which has graced the islands with numerous protected bays and coral-encrusted ledges, there are a wide range of sites where snorkelers can discover fish and colorful corals with a short swim from shore, or by setting sail to more remote coves and islets. There are literally hundreds of locations around the islands worthy of going overboard, and from that list we’ve chosen some favorites that offer the best combination of underwater scenery, beachside comforts and ease of access.

For shore-based snorkeler’s, Coki Point provides the island’s best combination of easy access, abundant fish life and interesting reefs. As a result, the beach area can get crowded, both by cruise ship groups and locals. There’s no surge or sharp rocks to negotiate as you wade into the calm waters, and you will soon be surrounded by swarming topical fish as you stand on the soft sand bottom. For some, this is enough, but those wanting to see more can head into deeper water, and towards the east end of the beach to discover hard-bottom reef structures with live coral and an even greater variety of sea life. Continue eastward around the small rock bluff and you’ll end up near the underwater observatory at Coral World. 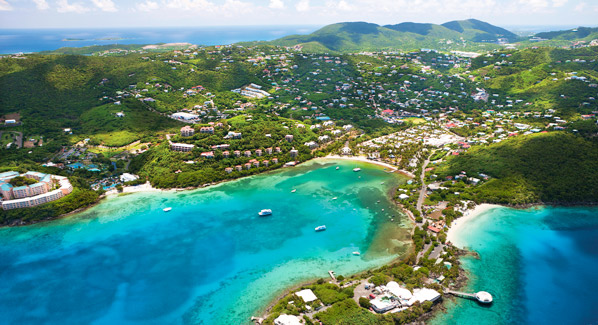 An aerial view of Coki Point on St. Thomas. The namesake beach is to the right in this photo, and the best snorkeling reefs are between the beach and the end of the point. Photo: Christian Wheatley/iStock

Other nearby options for shore-based snorkeling include Sapphire Beach, which tends to be less crowded, and Lindquist Beach at Smith Bay. Both offer beachside amenities and calm water, with the chance to see stingrays and turtles in grass beds, and stands of elkhorn coral farther out. A number of charter boats provide day trips to the less-accessible bays of the north shore, and to many of the smaller islands and rock piles near the east end. Charters leaving from the south shore often focus on Buck Island National Wildlife Refuge, where turtles are frequently sighted, but the boat ride across open water isn’t for everyone. 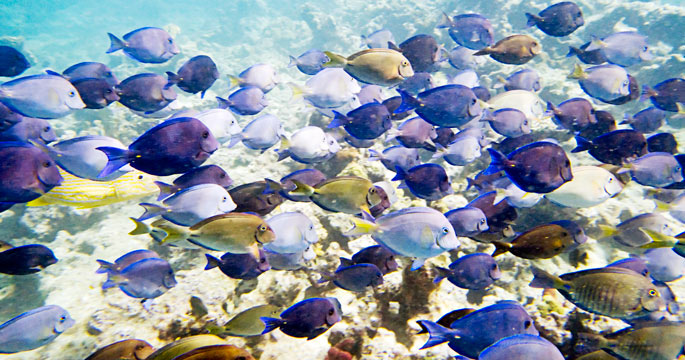 A school of tropical fish patrols a coral reef on the south shore of St. Thomas. Most fish are inured to the presence of humans, allowing snorkelers to approach for a closer look. David Coleman/iStock

Another popular option for charters originating at the east end is uninhabited Great St. James Island, where snorkelers can explore the calm waters of Christmas Cove, or the nearby rock pinnacles known as The Stragglers. Itineraries often take in two or more snorkel sites in a half- or full-day charter, and operators may vary destinations according to sea conditions and passenger preference.

With more than half the island incorporated into a National Park, St. John has a number of pristine and undeveloped beaches and snorkeling coves to explore. The most popular are also the easiest to reach. First on this list is Trunk Bay, home to a much-publicized underwater trail that leads swimmers through a coral reef fitted with underwater signage. This site is very popular with novices and families, as the waters are calm, the beach provides topside amenities and the site is a reasonable taxi ride from the ferry terminal at Cruz Bay. 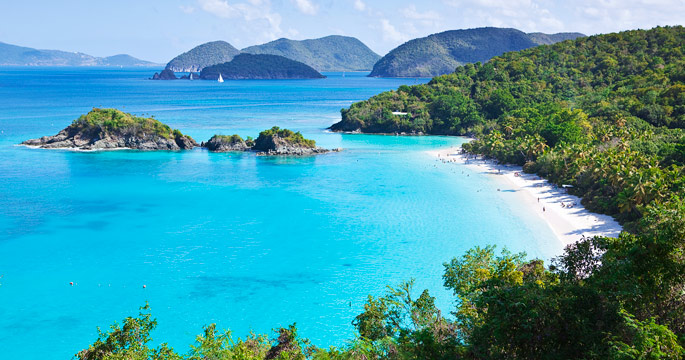 Snorkelers survey the underwater scenery at St. John’s Trunk Bay. This is one of many scenic sites throughout the islands where clear waters provide ideal snorkeling conditions. Photo: USVI Dept. of Tourism

Another perennial favorite is Watermelon Cay, which is known for its abundance and variety of fish life. Getting to the prime snorkel area begins with a 10-minute walk along the beach from the parking lot at the Annenberg Ruins, then a short swim from shore out to the small island. Those with their own transportation and the willingness to scramble over a few rocks can roam farther afield to access other top shore sites such as Haulover Bay. This site is reached by a trail from the East End Road, and will require some care when negotiating the shallow, rocky entry point. The reward is some of the most dramatic underwater topography around the island, including high-relief stands of elkhorn coral and an extensive grove of sea fans. 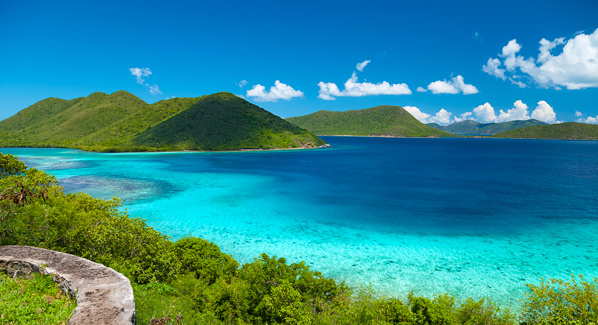 On the north shore of St. John, the sheltering headlands of Leinster Bay create an expanse of calm water that is home to some of the island’s best snorkeling reefs. Photo: Christian Wheatley/iStock

Many more snorkel sites around St. John are best reached by water. A favorite itinerary takes in several of the north shore sites in Trunk, Cinnamon and Maho Bays, while anyone up for a bit of paddling can join a kayak tour to Henley Cay, where a rich garden of hard and soft corals holds a colorful assortment of parrotfish, angelfish, tangs and wrasses. Another popular kayak/snorkel takes place in the bay known as Hurricane Hole, where instead of coral reefs, swimmers tour coastal mangrove forests rich in a wide range of sea life.

Of the three main islands in the U.S.Virgins, St. Croix offers the greatest number of fringing coral reefs. Not all of these reefs are easily accessible, however, and some are washed by waves and surge, and are not well suited to novice or casual snorkelers. One of the island’s best-known snorkeling destinations is Cane Bay. This popular beach is flanked by a coral reef that begins in shallow water and leads out to an underwater wall that drops from 40 feet to depths of nearly a mile. In addition to an abundance of sea fans, the reef boasts an interesting collection of brain coral. Getting to the best parts of this reef will require a swim of 100 yards or more, but there’s also plenty of fish life closer to shore. Few beaches in St. Croix offer public facilities, but Cane Bay does offer a dive shop and several beachside restaurants.

A similar site worth considering is the beach adjacent to the Palms at Pelican Cove. Here, the long reef that runs offshore of Christiansted harbor comes closest to shore, providing snorkelers with an easy swim in protected waters, and a chance to discover sea turtles finning among the corals or through sea grass meadows. A map of the prime snorkeling areas is posted on a signboard, and a pair of beachfront restaurants are available for refreshment. 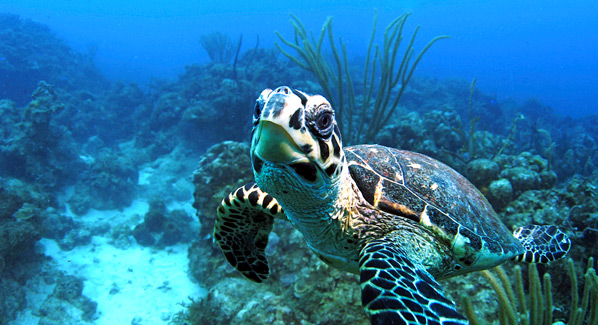 Green sea turtles are often seen in the coastal waters of the Virgin Islands, feeding on sea grass and sponges. Also common are hawksbill turtles. Both species nest on island beaches. Photo: iStock

Day guests are also welcome at the Buccaneer Resort, where for a modest fee, beach goers can spend the day at Mermaid Beach, and discover the reefs that lie just off the eastern end of the sand, and extend outward to Shoy Point. More adventurous types who don’t mind a 15-minute walk can head to the island’s east end, park at Point Udal and hike to Isaac’s Bay, where they will find an undeveloped beach and one of the best barrier reefs on the island. St Croix’s most famous snorkeling destination can only be reached by boat. The Buck Island Reef National Monument takes in the park’s namesake island and some 4,500 acres of surrounding reef. Within this protected zone, the Park Service maintains a guided snorkel trail that is fitted with underwater placards describing the flora and fauna of the park. Numerous tour operators offer three-hour to all-day trips to Buck Island. 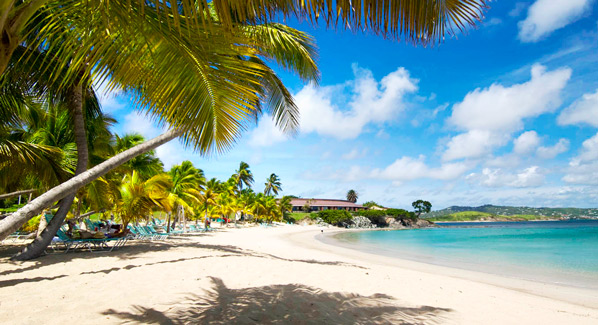 Mermaid Beach at St. Croix’s Buccaneer resort provides a relaxing starting point for snorkeling explorations of the bay and a nearshore reef that runs eastward toward Shoy Point. Photo: The Buccaneer Hotel

Back to U.S. Virgin Islands

Into the Blue: Best Snorkel Sites in the British Virgin Islands