The Caribbean is home to thousands of snorkel-worthy beaches and reefs, and I’ve spent hundreds of hours exploring sites near and far. For the optimum combination of calm water, easy access, vibrant coral growth, abundant fish life and sheer variety, here are my favorites.

Coral reefs start close to shore all along Bonaire’s sheltered western coastline, but the most colorful sites are a short boat ride away. A five- minute ride across calm water brings you to the low-lying, uninhabited shores of Kline Bonaire. Your boat captain can choose from one of more than two dozen sites based on conditions, and my consistent favorite begins right off No Name Beach, where hard and soft coral growth starts in as little as five feet of water. 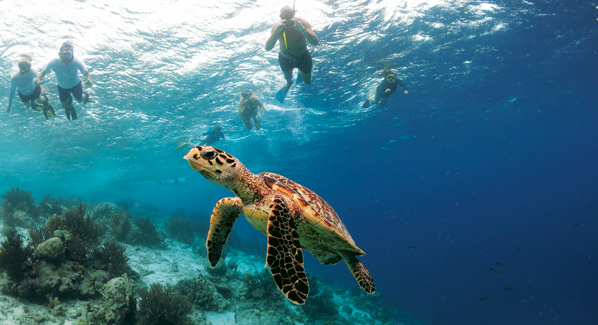 Sea turtles are often seen along the shoreline of deserted Kline Bonaire island, which is just a short boat ride from dive resorts on the west coast of Bonaire. Photo: Alejandro Gutierrez/ Tourism Corporation Bonaire

I’ve spent hours watching the fish life on Anse Chastanet Reef, but every so often, I find myself pausing to admire the view above the water. A foreground of golden sand and jungle green frame the towering profiles of St. Lucia’s most famous landmarks, the Pitons. Just a short swim from shore, a coral-covered plateau presents an undulating profile that rises within five feet of the surface, and then falls from 20 feet to depths of more than 100. In addition to large schools of tropical fish, this site is known for its small invertebrates, giving critter spotters hours of enjoyable hunting. 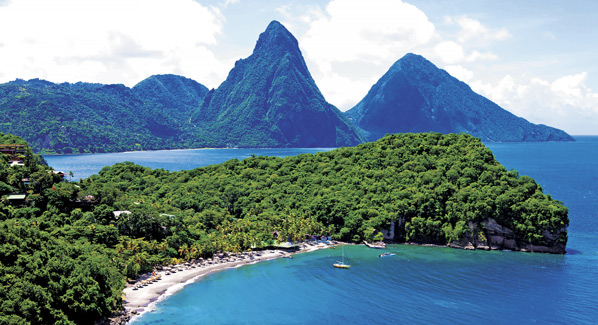 On the island of St. Lucia, the twin spires of the Pitons provide a dramatic backdrop for snorkelers exploring the near shore reefs at Anse Chastanet. Photo: Bernd Rac/Anse Chastanet Resort

Between the bareboat fleets, tour operators and private boaters, you’ll seldom find the waters around the rock pinnacles known as the Indians deserted. But that’s OK, there’s plenty of coral-covered reef to go around. I especially enjoy the steep cliff faces to the west, where seas are calmest and the underwater landscape is the most dramatic. The usual roster of reef characters there in abundance, including blue tangs, queen angels and a colorful assortment of parrotfish. Peek into the crevices and you might discover an eel or lobster lurking in the shadows. 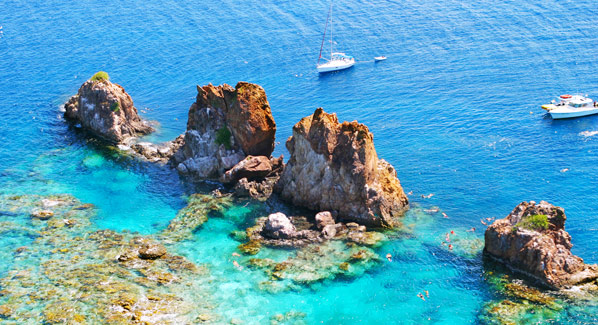 The distinctive rock pinnacles known as the Indians are the most popular snorkeling destination in the British Virgin Islands, offering clear water and colorful corals. Photo: BVI Tourist Board

Cancun isn’t known for great snorkeling. But drive a few miles south to the sleepy fishing village of Puerto Morelos, and you’re just a short boat ride from the Yucatan’s premier national marine park. The coral gardens begin a half-mile from the beach, and there are always a number of panga-style launches on the beach, with gregarious crews ready to provide guided snorkel tours of the park. Depths are typically less than 10 feet, making it easy to spot the menagerie of reef creatures that flit through the sea fans and coral fingers. 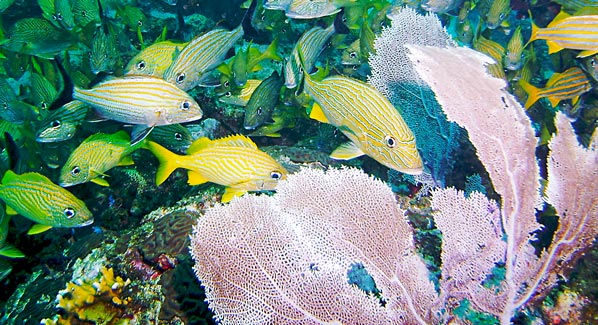 There are literally hundreds of miles of pristine shallow reef to explore around the islands of the Turks & Caicos. When I’m staying on Providenciales, and don’t feel like a boat ride, there’s no need to go far. Right off the beach is a three-mile expanse of coral heads and sea grass shallows known as Smith’s Reef. I sometimes enjoy searching the grass beds for hidden critters, but it’s the coral heads that hold the greatest variety of life. To locate a coral patch from shore, look for the patches of water that have a brownish tint, which indicates hard bottom. 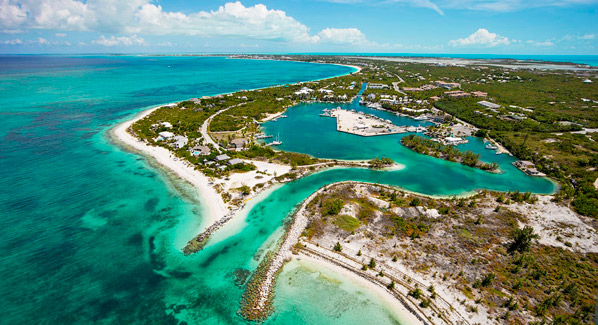 On the island of Providenciales in the Turks & Caicos island group, the coral heads of Smith’s Reef start just offshore of the Turtle Cove Marina and stretch for three miles to the east. Photo: Turks & Caicos Tourist Board

In the heart of the Bahamas, the Exuma Land and Sea Park encompasses dozens of islands and miles of protected reef. The best way to explore the fish-laden waters of this aquatic preserve is by signing up for a half or full day boat tour. The guides will not only know which sites are best based on tides and weather, they will also put you on to a number of additional adventures such as a swim through the hidden grotto from the James Bond film Thunderball, or a visit to the famous swimming pigs of the Exumas. 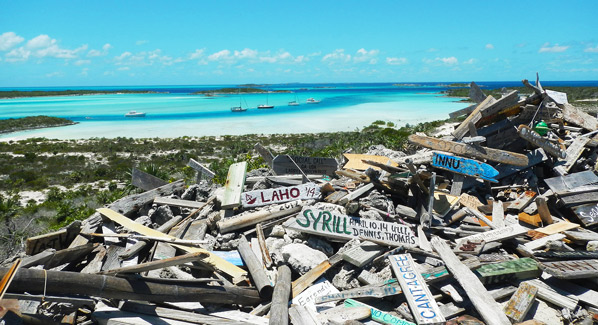 The Exumas Land and Sea Park encompasses a number of small islands and thousands of acres of shoals and reefs ideal for swimming and snorkeling. Photo: Darryl Massaro/Flickr

Belize’s original marine reserve packs a lot of underwater diversity into a relatively small area. Hol Chan is the Mayan phrase for “little channel” and when snorkelers arrive at this cut in the reef after an easy boat ride from Ambergris Caye, they are treated to spur and grove coral formations, sea brass beds and mangrove nurseries. Most tours also take in the site’s famous Shark Ray Alley, where southern stingrays and nurse sharks gather to nosh on fishy morsels offered by dive guides. The interaction is safe, and will put you right in the middle of the action. 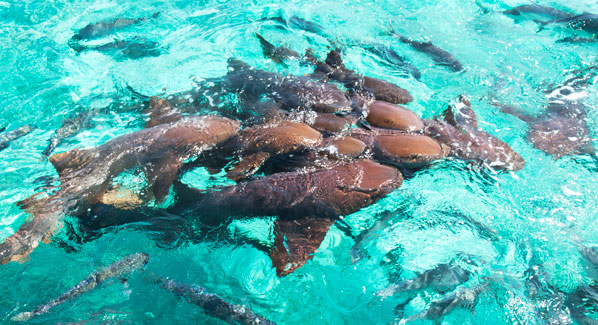 Nurse sharks gather in the shallow waters of Belize’s Hol Chan Marine Reserve in anticipation of a free meal of fish scraps. These placid reef dwellers pose no danger to humans. Photo: iStock

It’s been more than 50 years since Buck Island Reef was declared a National Monument, and it’s still one of the Caribbean’s most popular snorkel sites. Located off the northeastern shore of St. Croix, Buck Island offers deserted white sand beaches and an encircling reef dominated by branching Elkhorn formations and groves of undulating sea fans. An underwater snorkel trail leads through the coral maze, which is home to hawksbill sea turtles. Shallow depths put swimmers face to face with the many tropical fish that seek shelter in the branching arms of the corals. 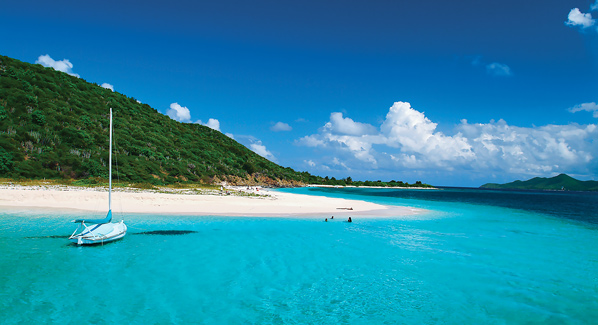 St. Croix’s Buck Island National Monument includes a white sand beach and one of the most extensive groves of elkhorn corals in the Caribbean. Photo: Steve Simonsen/ US Virgin Island Department of Tourism

A visit to Aruba’s De Palm Island is part snorkel trip, part beach party. Located just off the main island’s southern coast, this all-inclusive day resort offers half and full day experiences that include beachside buffets, libations, entertainment and guided tours to the nearby reef, which is one of the best on the island. Snorkel equipment and instruction are included in the price of admission, and while water conditions are beginner friendly, the underwater landscape offers plenty to keep even veteran snorkelers enthralled. 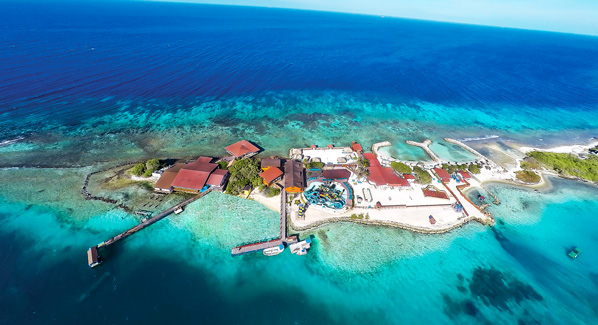 De Palm Island is located just off the coast of Aruba. Guests who come for an all-inclusive beach day can enjoy guided or individual snorkeling on reefs just off the beach. Photo: De Palm Tours

I love to swim with sea turtles, and one of the best places to do this in the southern Caribbean is in the Tobago Cays. This collection of five uninhabited islands lies just east of Mayreau in the southern Grenadines. It became a wildlife reserve in 2006, and is home to a colorful array of marine life— including a population of resident turtles. The formation known as Horseshoe Reef encircles four of the five islands to create calm conditions for snorkeling. Portions of the park can get a bit crowded when several tour boats arrive at once, but even on busy days I’ve always been able to slip off and find a quieter corner of the reef to enjoy. 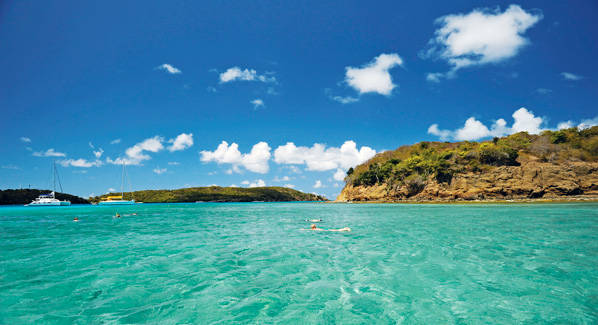 In the southern Grenadines, a group of five small, uninhabited islands known as the Tobago Cays provide excellent snorkeling within the protected shallows of Horseshoe Reef. Photo: Debbie Snow

Into the Blue: Best Snorkel Sites in the British Virgin Islands