Hawaii’s beginner-friendly beach breaks are ideal for learning how to catch a wave.

If you’ve ever dreamed of learning to surf, the islands of Hawaii are an ideal place to get started. Yes, this is one of the planet’s premier big-wave destinations, where the world’s best come to test their mettle—and sometimes even risk their lives. But Hawaii is also a great place for first- time surf riders, and novice-friendly surf breaks can be found on all the major islands. 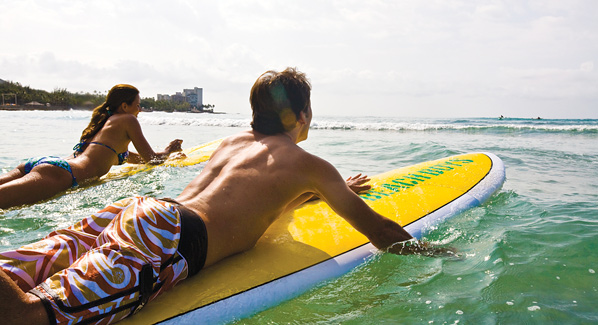 The powerful waves that experts crave rise up quickly from deeper water to form steep walls. To catch this type of wave, a surfer must jump quickly to a standing position as the board falls down the wave face, then perform a sharp cut near the bottom to turn sideways and keep in front of a breaking curl.

By contrast, a novice-friendly swell will build more gradually over a gently sloping bottom and move more slowly toward shore while maintaining a face that resembles a mound more than a wall. Catching a ride on this type of wave is much easier, as the surfer has more time to paddle into the wave, and can set a straighter path towards shore.

It sounds easy, and it can be, but most people will still benefit from a lesson or two. Fortunately, the Hawaiian Islands excel in the instruction department. Numerous surf schools are located on or near the best novice-friendly breaks, and accommodating surf coaches have helped everyone from toddlers to octogenarians catch their first wave.

The main reason to get surfing lessons rather than going it alone is safety. No, you aren’t in danger of getting punched out by an angry local, that’s only in the movies. But if you simply rent a board at random and head for the shore, you may end up over your head in a surf break that pounds and pummels, leaving you waterlogged and discouraged. Most professional surfing instructors have undergone lifeguard training, first aid and CPR. They know the best breaks, have perfected teaching methods that allow almost anyone to succeed and can provide you with the right equipment. 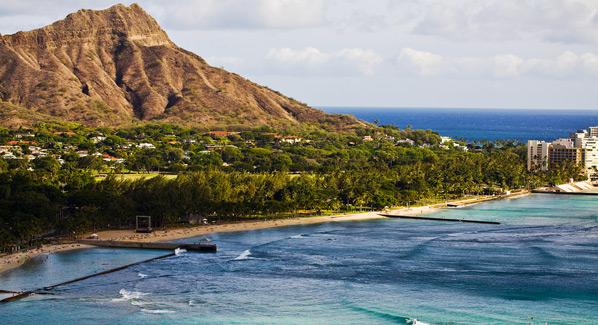 The steady swells that roll in along Oahu’s Waikiki Beach are ideal for novice and causal surfers, who can enjoy long rides with little fear of dangerous wipeouts. Photo: Tor Johnson/Hawaii Tourism Authority

The best boards for first-timers are usually larger than those the pros use. A bigger board is not only easier to ride on a slow wave, it’s also more stable for learning how to stand atop. A favorite with newbies, the soft-top boards are comfortable to lie on while paddling and provide better traction when you practice standing. Many instructors also furnish comfort items, such as swim shoes and Lycra rash guard shirts that prevent chaffing and provide sun protection.

A typical first-time lesson lasts about two hours and begins with a few minutes of dry land instruction on how to catch a wave and stand up. Many of the areas where beginner lessons take place are fairly shallow, and you may be able to stand in the water. A bit of swimming may still be in order if you wipe out. Fortunately, a fall at a beginner break won’t result in an underwater tumble in foaming surf, and within minutes you’ll be ready to try again. Most everyone gets the hang of it by the end of the first lesson and is able to stand for at least a few brief moments. You’re surfing Dude!

The island’s fabled North Shore spawns monster waves each winter. Meanwhile, on the opposite side of Oahu, far kinder swells wash into the waterfront at Waikiki. It was here on a long, steady wave that the modern sport of surfing was born and popularized by Duke Paoa Kahanamoku. Several surf schools operate on this beach, which is sought out by accomplished long boarders, stand-up paddleboard enthusiasts and outrigger canoeists. It’s a very democratic scene, and one where newbies are a common and accepted sight. Among the more established schools serving Waikiki are Hans Hedman Surf Adventures, which is headquartered in the Park Shore Hotel, and to the north of the strand, the Ty Gurney Surf School at the Imperial Resort.

Savoring the thrill of the first ride during a surfing lesson at Waikiki Beach. Photo: Hans Hedman Surf Adventures

Another popular option for those who are staying in the Ko Olina resort area, or who don’t mind driving a bit to get away from the crowds, is the Hawaii Fire Surf School. Here, the instructors are off-duty firefighters who surf. And though they stand ready to rescue, there’s little likelihood of getting into trouble as you learn on the gentle waves of a nearly secluded beach on Oahu’s West Coast.

A third option takes you to the North Shore where Hans Hedman operates a satellite facility at the Turtle Bay Resort. Rather than attempt the big breakers that pound the outside reef in winter, you’ll be surfing the milder secondary break to the inside. If these waves grow too challenging, the instructors know of several alternate locations nearby that remain novice-friendly.

Two areas in Maui are favored for learning. Near Lahaina, the break to the south of the harbor breakwater is one of the most consistent and popular spots on the island. Nearby Puamana Beach Park is another favorite site for instruction. What they both have in common are easy water entries, manageable waves to paddle through on the way out, and a fun ride back in without the fear of being overtaken by a towering wall of water. Among the best schools in Maui are the Royal Hawaiian Surf Academy, the Goofy Foot Surf School and—though the name doesn’t imply it—Maui Surfer Girls, which in addition to its female surf camps, teaches beginners of all ages and both genders.

Farther down the coast, another favorite spot—and what some say offers the best beginner waves on the island—is Kalama Cove in Kihei. Here, a steady, consistent swell rises in relatively shallow water, and there are excellent shore facilities at nearby Kalama Park. This site, like many, is best in the morning, when there is less wind. Just across the street from the park is Big Kahuna Surf Adventures, which provides instruction and all the necessary gear. Also nearby is Maui Wave Riders. 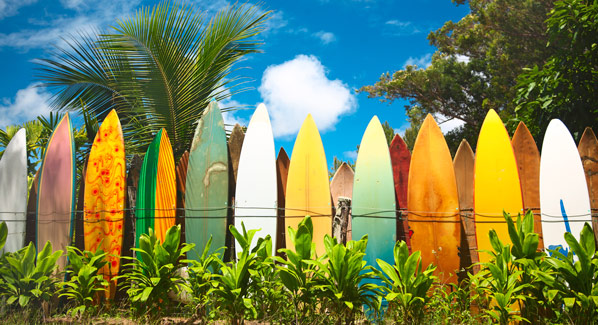 Although better known for golf and big game fishing, the Big Island has a vibrant local surf scene too. The central west coast is where you find breaks suitable for first-timers to hone their skills. A few miles south of Kailua-Kona is Kahaluu Beach Park. The clear waters inside the sheltering reef are a favorite with swimmers and snorkelers, while the waves attract beginner and intermediate surfers. There is often a smaller break to the inside, where even youngsters won’t feel intimidated, while the outer break can provide a bit more challenge for those who have mastered the basics. This is where most instruction takes place, and two favorite schools are Surfer Bear Hawaii and Kona Mike’s Surf Adventures.