While no longer well-kept secrets, the following isles continue to engage with charm and scenery.  Read below to see our picks for the most beautiful islands in the world to see in 2022.

The Islands of Tahiti include over 100 islands within five archipelagos. The most photographed and visited are the Society Islands, which include Tahiti, Bora Bora and Moorea. You’ll find barrier reefs and cobalt blue lagoons, powdery soft sands and emerald volcanic peaks. Among the dramatic mountain ridges lies volcanic Mount Rotui, the second-highest mountain on Moorea. The five-mile round trip hike to the top is challenging even for experienced hikers but rewards with scenic views of the entire island. 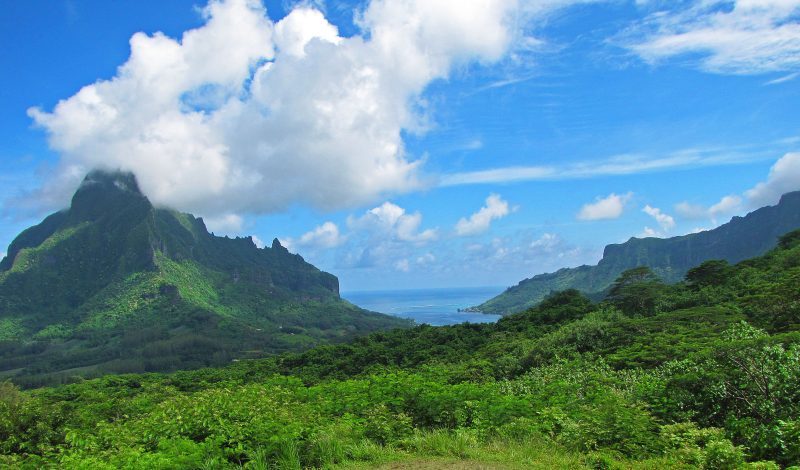 The mountains of Moorea are some of the most rugged in the world. Mount Rotui is the easiest to climb and offers views of Opunohu Bay and Cook’s Bay. Photo: Ugur Ozden/Flickr

Certainly, Santorini has been on many a bucket list. For decades it has been the most popular Greek destination but it’s still worth joining the crowds to see this crescent moon-shaped island. Cruisers head to the picturesque village of Oia for the views and sunsets amidst the stunning architecture of whitewashed buildings dotted with cobalt blue dome roofs. Be sure to wander through the stone-paved alleys stopping at a café to taste the local wine paired with tomatokeftedes a patty made with local feta cheese and the famous Santorini cherry tomato. 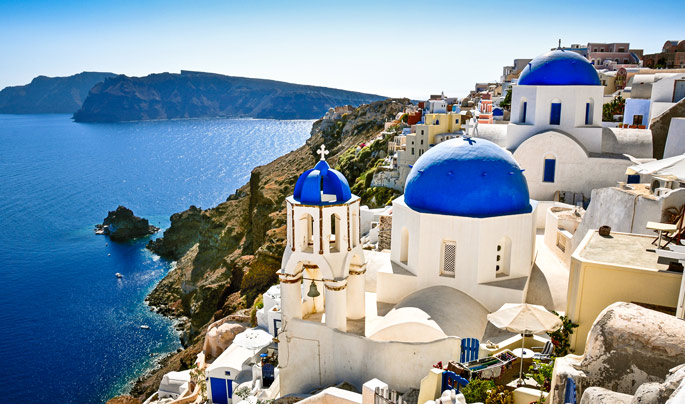 After visiting Oia village take the hike along the caldera to Fira, the largest town on the island. Drop by a tavern or two along the way. Photo: Gene Tobia/Flickr

While tropical rainforest covers much of the island’s interior including ribbons of trails favored by hikers, the Garden Island offers 111-miles of coastline with 50 miles of glistening white sand for beach lovers. The Na Pali coastline with its intensely colored dramatic cliffs, pinnacles and canyons beckon photographers from around the world to capture its glory from air or sea. A helicopter tour from Princeville takes visitors over the 65 miles of lush roadless terrain showcasing the waterfalls, valleys and crevices. 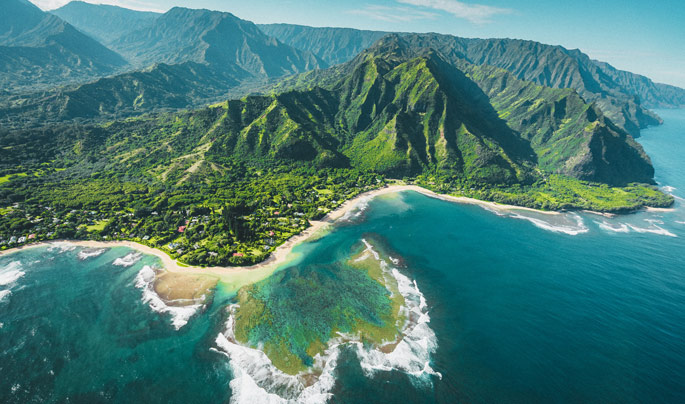 Kauai has several small towns to explore. Hanapepe is known for art, Koloa dates back to the sugar era of 1835 and locals favor Hanalei. Photo: Karsten Winegeart/Unsplash

The land of elaborate temples, Hindu ceremonies, terraced rice paddies and monkeys, the island of Bali is not known as much for its beaches as for its lush landscapes. Sure, you can find white and black stretches of sand with cliffs looming above hidden shores. Dubbed the most popular beach in the world of Instagrammers, Kelingking Beach on Nusa Penida Island is mostly viewed from above. Getting to its shore involves a precarious hike and most will find the scene from above to be equally mesmerizing. 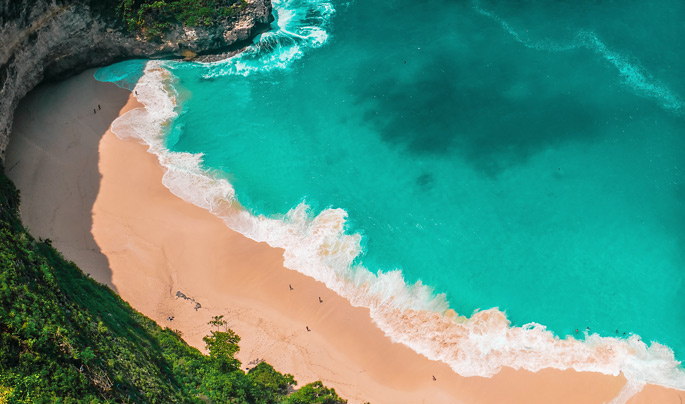 Kelingking Beach AKA T-Rex Beach is the claim to fame for the island of Nusa Penida. From above the shape resembles the neck of a Tyrannosaurus Rex. Photo: felfin05 evin on Unsplash

This archipelago of 1,200 islands and atolls stretches across the equator and lies within the Indian Ocean. The collection is comprised of fine white sands formed from coral, crystal waters and palm trees; and it’s the world’s lowest country reaching four feet above sea level. Here, over-water bungalows are prevalent. Rasdhoo Atoll is uninhabited topside but beneath the surface, the surrounding ocean is populated with hammerhead sharks, manta rays and stingrays as well as the more docile sea turtle. 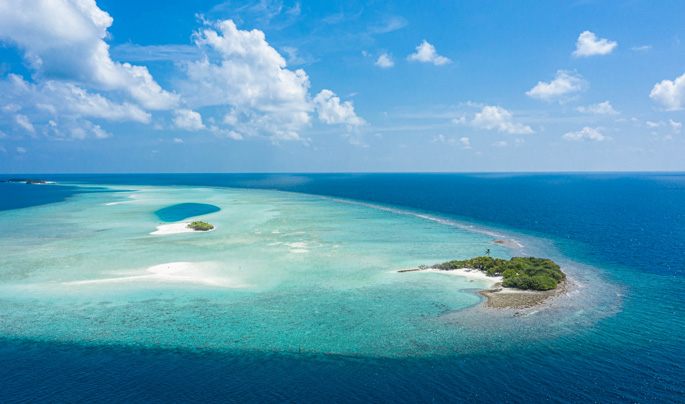 Divers find Rasdhoo’s underwater world to be some of the best. Shallow water lagoons are great for beginners while deep walls and channels appeal to the advanced. Photo: Maahid Photos/Unsplash

A visit to St. Lucia isn’t complete without a glimpse of the Pitons, the Caribbean’s most distinctive landmark. Often seen from the winding mountainous roads when approaching Soufrière, the views are ubiquitous. Even more captivating are the twin volcanoes seen from the water. These twin peaks that rise up from the sapphire blue sea are connected by an inland ridge that became a UNESCO World Heritage Site in 2004. 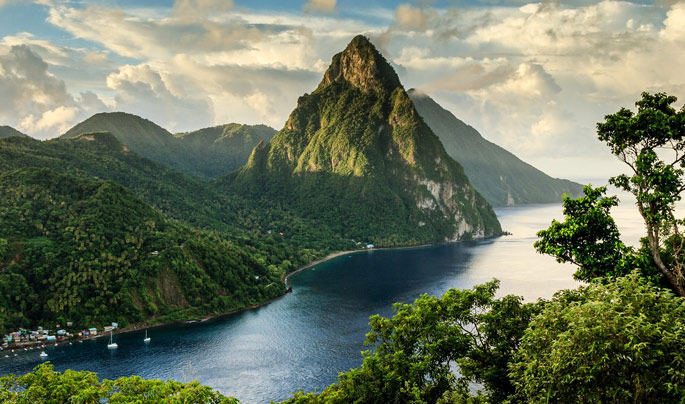 A visit to the Pitons might include a rigorous hike on the Gros Piton trail or a relaxing soak and mud bath in the Sulphur Springs. Photo: David Dale/Flickr

The Phi Phi Islands National Park is comprised of six islands skirting Maya Bay, which was made famous in the 2000 film The Beach starring Leonardo DiCaprio. The two larger islands Koh Phi Phi Don and Koh Phi Phi were so popular among day-trippers and snorkeling boats that the officials of Thailand closed the bay, not so much due to Covid but to restore the damage done to the once pristine spot due to over- tourism. Today visitors are allowed back but with imposed new rules to protect the area. 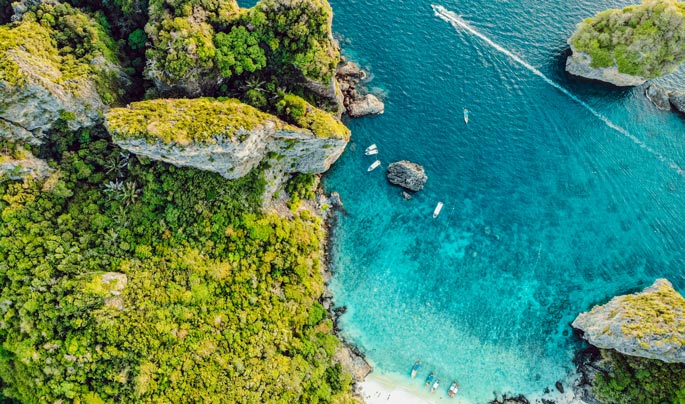 While the Maya Bay draws with its natural beauty there hundreds of gorgeous islands between Phuket and Krabi. Take a longtail boat and explore the area. Photo: Miltiadis Fragkidis/Unsplash

The Latest on Traveling to the Caribbean

Where to Snorkel with Sharks