There are two distinct sides to Guadeloupe, literally. This island nation encompasses two distinctly different landmasses separated by a narrow waterway known as the Rivière Salée. West of the river, wilder Basse-Terre is a land of lush rainforests and rugged volcanic slopes dotted by small guesthouses and jungle lodges. To the east, lower-lying Grand-Terre is fringed with coral reefs and white-sand beaches overlooked by boutique resorts.

Grande-Terre offers an abundance of creamy-soft white-sand beaches, flanked not by mega resorts but instead small seaside hamlets loaded with local charm. These settlements offer beautiful beach access, picturesque settings and plenty of seaside eateries. Gosier, known as the Riviera of Guadeloupe is a village of small hotels and restaurants just a short walk to the beach. Sainte-Anne’s beach provides a tranquil seaside promenade, while the former fishing village of Saint-Francois is home to a number of restaurants serving fresh local seafood. 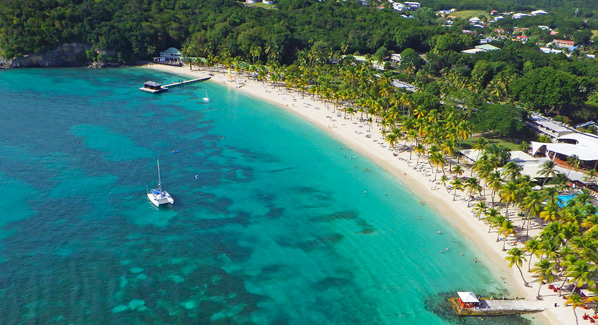 Palm trees, soft sands and calm, clear waters make the beach at Sainte-Anne one of the most popular on Guadeloupe. A nearby village offers shops and cafes. Photo: iStock

2  Where the Whales Are

The blue waters surrounding Guadeloupe are home to more than 20 resident and migratory species of whales and dolphin, and you don’t have to go far from shore to find them. A signature sighting is the sperm whales that pass close to the western shores of Basse-Terre each winter, earning the island the distinction of being one of the best places in the world to see these impressive animals. Other regulars include humpbacks, pilot whales and spotted dolphins.

The French islands tantalize the gourmand with Creole dishes that blend touches of African, Indian and French cuisines. Favorites include a variety of one-pot stews and curries based on fish or seafood added to a mixture of local and imported spices and root vegetables. African influences include plantains and peppers, while East Indian spices such as coriander, cumin and cardamom contribute unique flavors. A French flair for preparation and presentation heighten the enjoyment of all offerings. 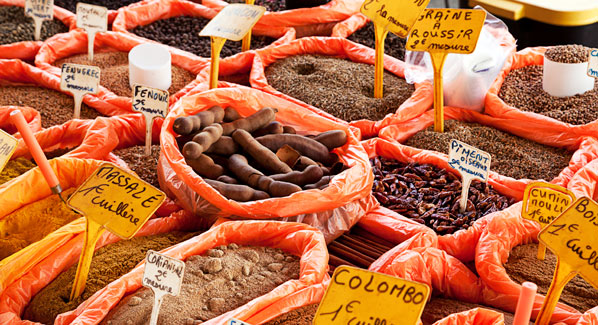 A table at the open-air Saint-Antoine market in Pointe-à-Pitre is laden with the spices and piquant peppers that provide the basis for Creole flavors. Photo: Oliver Hoffman/iStock

Underwater pioneer Jacques Cousteau was so intrigued by Guadeloupe’s underwater landscape that he included scenes in his landmark film Silent World. These aquatic landscapes are now preserved at Cousteau National Marine Park at Pigeon Island. Sheltered from wind and waves by the hills of Basse-Terre, the calm waters of this marine preserve delight divers and snorkelers with reefs rich in tropical fish, coral and sponges where normal dives are 60 feet. Topside visitors can get a peek below from glass bottom boats that depart from nearby Malendure Beach.

Off the southern coast of Guadeloupe, a cluster of eight small islands lures sailors and travelers seeking the ultimate in off-grid Caribbean charm. The largest, Terre-de-Haut, features a picture- perfect seaside village where sidewalk cafes and small boutiques overlook a bay that has been recognized as one of the most beautiful in the world. Nearby Terre-de-Bas provides an even quieter escape, with deserted beaches and miles of walking trails. Other islands in the group are left to the birds, iguanas and visiting yachts, which drop anchor in quiet bays. 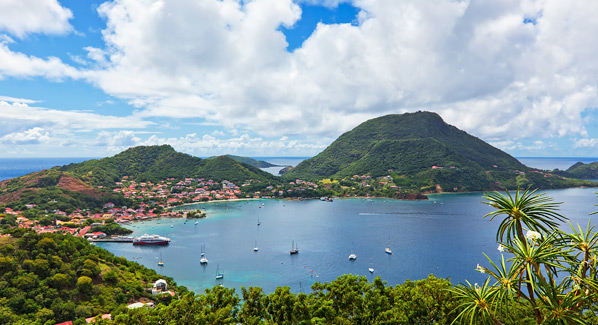 The seaside settlement on the small island of Terre-de-Haute overlooks a bay that has been designated by UNESCO as one of the most beautiful in the world. Photo: Oliver Hoffman/iStock

Step back in time with a visit to the satellite isles of Marie-Galante and La Desirade. Both are off the beaten path and still hold to their simple agrarian roots. On Marie-Galante, sugar cane is still harvested the traditional way, and used by local distilleries to create small-batch runs of Rhum Agricole. Small guesthouses provide bucolic accommodations and visitors find the quiet beaches of La Desirade a big attraction.

The indigenous Caribe people called this island the land of the beautiful waters. Basse-Terre is riddled with gorgeous refreshing falls—more than 100 in all, though some are not easily reached. A must-see, and the island’s most popular, is Chutes de Carbet where a trio of cascades tumbles from the lower slopes of the La Soufrière volcano. Easy access to Cascade aux Ecrevisses makes it a frequent stop when traveling along the main road, La Traversee. It’s easy to find, as cars are often parked along the roadside while passengers pause for a refreshing dip in the cool pools below. 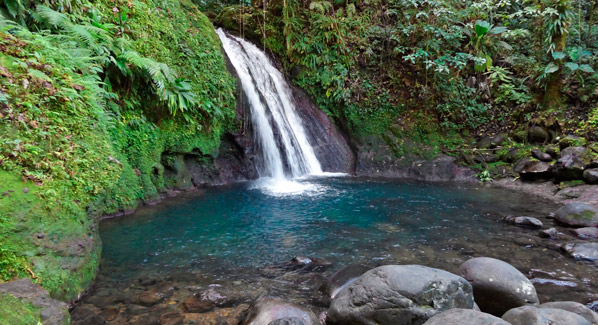 The cool freshwater pool at the base of Cascade aux Ecrevisses is a favorite with swimmers. The site is easy to reach, as it sits near the main roadway leading to the town of La Traversee. Photo: iStock

Visitors have plenty of informal opportunities to brush up on their high school French, but there is even better way to immerse in the local culture and discover the true character of the island. Guadeloupe is home to several great language schools where you can study the French language 10 to 20 hours a week with a group or on your own. After class, there’s time to head out to explore the culture while practicing lessons learned. 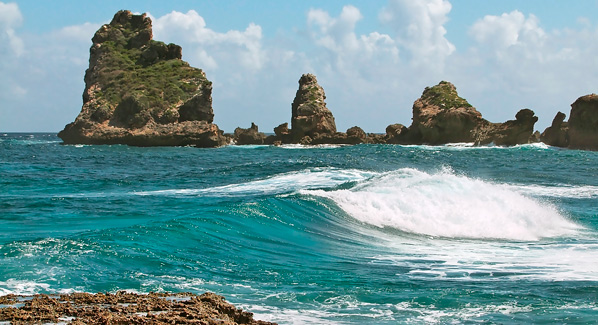 On the eastern edge of Guadeloupe, the distinctive limestone rock formations of Pointe des Chateaux were carved by the actions of Atlantic surf and trade winds. Photo: iStock

Outdoor adventures on Basse-Terre take place in the Parc National de la Guadeloupe, a UNESCO Biosphere Reserve spanning some 74, 100 acres of forested lands. Hikers of all levels can find routes to their liking, with scenery that includes rain forests, lakes, waterfalls and mountain slopes. On many hiker’s bucket list is the 4,183-foot mountain of Soufrière. This active volcano, which is the highest peak in the Lesser Antilles, still spurs out the occasional clouds of hot gases and sulphur steam.

It’s easy to move from island to island or around the island of Guadeloupe by water. A network of catamarans, sailboats and motor launches connect waterfront towns and the outlying archipelago with inexpensive and reliable routes. For trips farther afield, fast ferries sail to Martinique and Dominica.