Updates on the island's historic city

A visit to Old San Juan is a trip back in time. It is a place of blue cobblestone streets that glisten when wet with tropical rains; brightly painted houses with balconies overflowing with bougainvillea; and iron gates protecting hidden patios. All are part of the magic. This historic district is filled with Spanish-Colonial buildings dating back to the 16th and 17th century, set within 20- foot-high walls. There are famous landmarks such as the fortress El Morro, San Cristo Arch and Parque de las Palomas. But equally intriguing are the quiet neighborhoods that open to community squares, and the unique shops and restaurants tucked into hidden alleys. Old San Juan may have been temporarily dampened by the rains and winds of Hurricane Maria, but the spirit lives on. After two months without power in 2017, the town has regained its fortitude and lives on stronger today.

Once the Carmelite Convent, established in 1651, this cloister housed nuns for 252 years. In 1903 the building was transformed to a retail store and dance hall, and then became a hotel in 1959. This was during the time when Ricardo Alegría director of The Institute of Puerto Rico Culture established his urban renewal program to save all of the historic buildings in Old San Juan. Over the next three decades, the hotel changed ownership and management and underwent various renovations. The current rendition reopened in 1997 with much of the original structure restored. The building’s large courtyard is surrounded by tiered balconies draped in philodendron that overflow to the patio below. Arched hallway corridors lead to rooms, decorative tile floors have been restored, and the décor features wrought iron fixtures, dark woods and grand chandeliers. Today’s hotel is a blend of old world charm and new world conveniences. 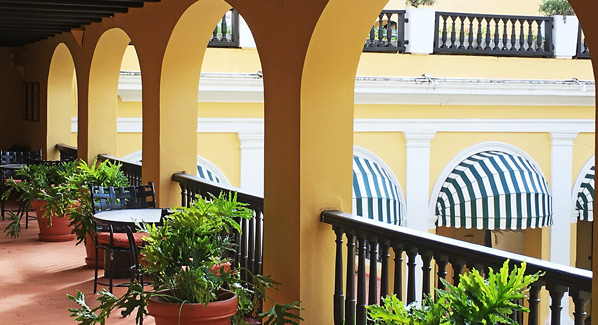 Balconies at Hotel El Convento look out onto an inner courtyard that is shaded by a massive, 300-year-old nispero fruit tree that was brought from Spain as a seedling. Photo: Debbie Snow

Once a favorite with the rich and famous, the hotel now receives visiting dignitaries and guests from around the world. The first two floors are used for dining and the top three are guest rooms that open to the courtyard below. On the roof is a sundeck and small pool overlooking the city. With walls of sunbaked clay three feet thick, El Convento was build to withstand hurricanes, so it’s no surprise that it came through Hurricane Maria with minor damage and never really closed. It was used to house Coast Guard personnel right after the storm, but within two months was back to receiving paying clients. The hotel has had the tradition of serving guests wine and cheese from 6 to 7 p.m. nightly, giving guests an opportunity to chat about their day before heading out to dinner. The ground floor restaurant Café Nispero sits under a giant 300-year-old nispero tree, serving a huge breakfast, and open for lunch and dinner as well.

Made in Puerto Rico

Shopkeepers reopened in Old San Juan just over a month after hurricane Maria, even though they were without electricity. Today, the power is on and stores are back on track with shelves and racks once again stocked with products from the island. Walk down Calle Fortaleza and the aroma of lavender will guide you to the all-natural apothecary of Marisel Herbal Bath & Body. Her products are handmade on site and include a natural line of skin and body care products. Favorites include the salt scrubs made from Puerto Rican sea salt and infused with lavender or even chocolate. Medicinal products like Breath Better, Good Bye Pain and Relieve Stress are popular with today’s stress levels. Hand made soap, lip balm and teas can go home in your carry on. A chemist by trade and yoga enthusiast, Marisel offers yoga on site as well as classes for those wanting to make soaps and skincare products. Another shop featuring locally designed and manufactured products is Concalma. The business opened in 2006 offering a line of simple tote bags. Today new colors and designs have been added to the collection, including an assortment of backpacks, cargo bags, and clutches. For artwork and tchotchkes made in Puerto Rica, look to Mundo Taino, which has two locations in Old San Juan. Paintings, pottery, masks, engravings, ceramics and even coffee and rum are sold in the shops. It’s an ideal place to shop for gifts or home décor. And while you are there, pick up the CD of the El Yunque rainforest sounds, which you might hear when entering the store. 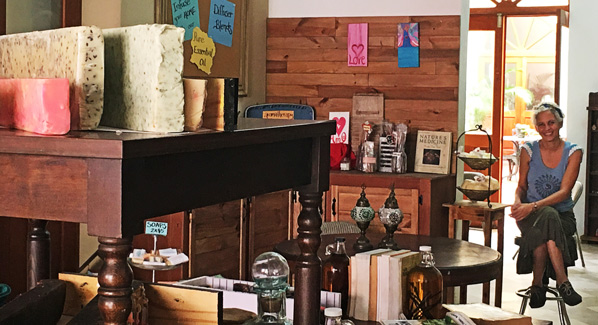 Marisel Herbal Bath & Body is an artisanal apothecary that offers everything from teas for an upset stomach and oils for allergies to body exfoliants and creamy lip balms. Photo: Debbie Snow

One of the best ways to get to know a town is by walking the streets and tasting the food. If you want some background on the buildings and streets of Old San Juan, as well as a taste of the local delicacies, there’s no better way than a Spoon Food Tour. The Old San Juan highlight tours starts in the morning at Plaza de Quinto Centenario. The square commemorates the 500-year anniversary of the New World, and the totem pole in the middle pays homage to the Taino Indians, the island’s indigenous inhabitants. The first food stop on the tour is for café con leche and Mallorca, the sweet bun with ham and cheese, buttered and pressed and sprinkled with powder sugar. Here you’ll explore the Cuartel de Ballajá and the location of Café Don Ruiz. The cafe’s building was used as barracks during the Spanish American War and in WWII; it was transformed into a hospital. Today it houses the Museum of the Americas. As you walk south toward the center of Old San Juan, you’ll stop off for another morning favorite, a quesito, which is a pastry filled with cream cheese. Lunch is the Puerto Rico national dish, mofongo, which is made to order at Hecho en Casa, and followed by a Puerto Rican made tropical fruit popsicle. A walk along the Paseo de la Princesa leads to the final stop at the Princesa Gastrobar, which serves local Puerto Rican cuisine in a hidden garden. The spot was once the site of the city’s jail. Begin the meal with a mojito and end with a local fish stew in a sofrito base with a view of San Juan Bay. 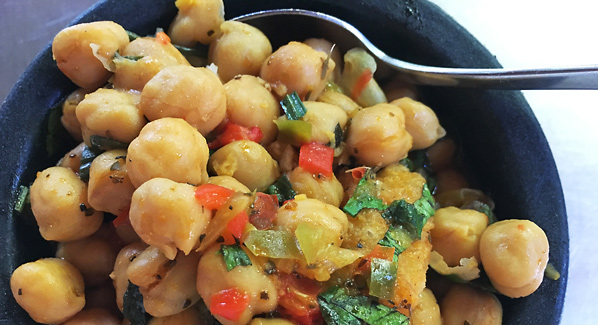 The forts of Old San Juan have withstood centuries of storms, and were largely unfazed by the Hurricanes of 2017. Both are open and offering free admission for a limited time. The island’s most iconic landmark, Castillo de San Felipe del Morro, is usually known simply as El Morro. This massive stone edifice juts out into San Juan Bay, with 140-ft high ramparts that rise above the cliffs at the harbor entrance. El Morro was built in stages, growing from a simple four-cannon blockhouse established in the early 1500s to a sprawling six-level citadel with outer walls 15 feet thick. It has defended the harbor from pirates and Dutch and British forces, and pressed into service by the US Army during the Second World War. Today, it is a United Nations World Heritage Site, recognized as the oldest Spanish fort in the Western Hemisphere. 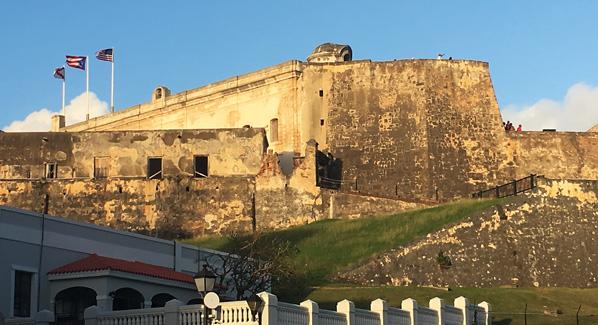 Though less well known than El Morro, Old San Juan’s Fort San Cristóbal is an equally important and interesting element of the city’s history, and well worth a visit. Photo: Debbie Snow

Head east on Calle Norzagaray from El Morro and you will find San Juan’s “other fort.” Though it sees fewer visitors than it’s famous counterpart, Fort San Cristóbal is actually larger than El Morro, as it spreads across 27 acres of high ground on the edge of the original walled city. Following a Dutch raid in 1625, a small fortification was created to protect the city from land attacks. A century later, an ambitious construction project created the present day fortress, complete with moats, bridges and tunnels. San Cristóbal’s defenses subsequently thwarted an attack by British troops, and saw it’s final military action in 1898, during the Spanish-American War. Today, visitors can wander the bunkers, barracks and hidden tunnels of San Cristóbal, or sign up for ranger-guided tours that delve into the history of the fort.

Soon after the hurricanes passed, a number of restaurants in Old San Juan reopened part time with limited service. Today, most all are back serving full menus at regular hours. San Juan’s culinary choices are many and varied. The cozy, romantic and eclectic Verde Mesa works with fresh organic ingredients to deliver Mediterranean, French and Caribbean influenced meals with plenty of vegetarian options. The lines outside Casa Cortez are starting to form again. This local favorite serves breakfast, lunch and dinner with special chocolate-infused concoctions of grilled cheese, croquetas de jamon with chocolate and grilled salmon with a savory chocolate sauce. After dining, many patrons buy a box of truffles or some chocolate bars to take home. For local food, Hecho en Casa is the place, as all meals are made fresh to order. This restaurant is also a stop on the Spoon Food Tour. Several coffee shops sell Puerto Rican grown beans and blends. For some fresh brew and a quick meal, Cuartro Sombras has some of Puerto Rico’s best coffee. It’s a place where you’ll want to take home a few bags and have a pastry, salad or sandwich while you are there. After a morning walk to El Morro, stop off at Café Don Ruiz for a morning cup of coffee and a Mallorca, the favorite breakfast treat from Spain. 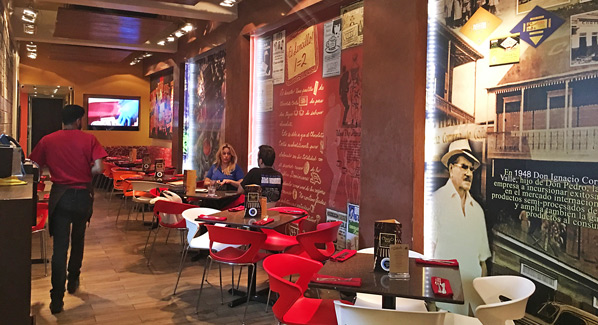 The Casa Cortés ChocoBar is operated by the chocolate-producing Cortés family, serving meals that incorporate their chocolates, and showcase their family’s art collection. Photo: Debbie Snow

Back to Puerto Rico