Six Islands with perfect conditions for learning or shredding

Over the past decade, kitesurfing has grown from a niche activity to one of the world’s most popular wind sports. Innovations in equipment and teaching methods allow people off all ages to embrace the sport. The islands of the Caribbean are ideal destinations for kiteboarders, as they offer warm waters and stead trade winds. The best locations have winds that blow from on shore or side shore to the beach, and waters that are sheltered from ocean waves. Here are six of the region’s kiting hot spots.

Windsurfers discovered Aruba in the 1980s, and the island’s west coast remains a hotbed for sailing activity. These days, the area known as the Fisherman’s Huts sees more kites than sails, as it offers all the right ingredients. Trade winds sweep in from the east, which allows kites to be deployed over the water, and rides to start right from the beach in shallow water. Beginners are able to hone their skills in flat water and forgiving near shore conditions, while advancing riders can ramp up the action by moving a few yards offshore to make long, fast runs along the beach. More experienced riders can also venture to Boca Grandi, a small bay on the island’s south side where winds and waters are more intense. 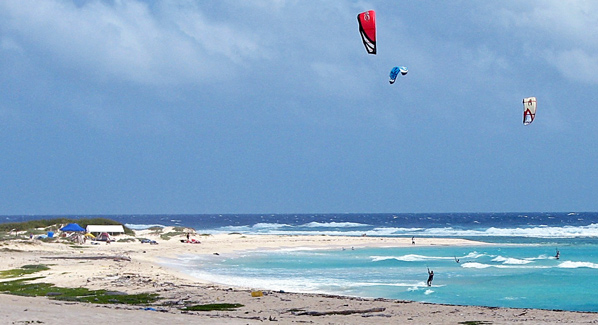 Aruba’s Boca Grandi is the place where advanced kiteboarders gather to play in the chop, or venture beyond the mouth of the bay to launch off larger waves. Photo: Robinszeggs/Flickr

Running north to south through the central Bahamas, the Exumas are a chain of small, green islands surrounded by white sand shoals and the deep blue waters of the Atlantic. In summer, lighter winds create relaxing conditions for kiteboard runs in calm bays and passages between islands. Stronger winter fronts amp up the action with chances to play in the waves and power up for high-flying aerial chop hops. The largest island in the group, Grand Exuma, is the starting point for most kiting excursions, and Exuma Kitesurfing is the outfitter of choice. This full-service shop offers rentals, lessons with certified instructors, and taxi boat services to begin long downwind runs, or excursions to remote, wind-swept sandbars. 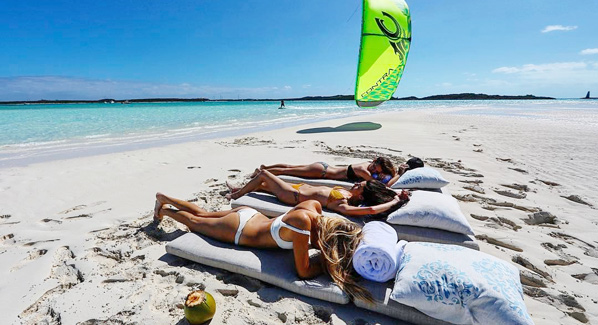 The Exuma Islands are known for white sands and emerald waters. In recent years, these islands have gained a reputation as the premier kiteboarding destination in the Bahamas. Photo: Billy Bosch/Flickr

Bonaire is best known for it’s world-class shore diving, but the sheltered waters of the island’s west coast are also prime kiteboarding territory. Three miles south of the town of Kralendijk, Atlantis Beach is the local mecca for kiting. Two companies, Kiteboarding Bonaire and the Bonaire Kite School, offer gear, lessons and chase boat support. It’s an ideal place to learn the basics, as the trade winds that sweep across the island’s southern salt flats are steady and predictable, and instruction can take place in knee-deep water over a forgiving sand bottom. The kiteboarding area is located on the southwest tip of Bonaire and can be found by following the brightly colored kites soaring through the air. 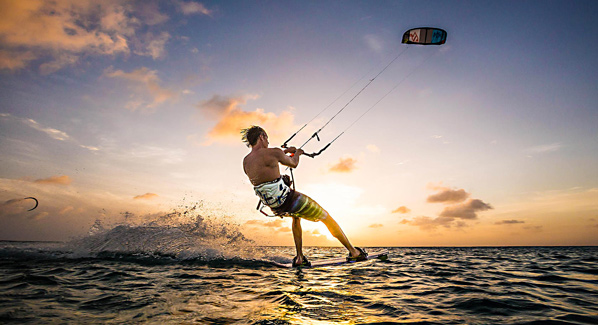 A kiteboarder makes a sunset run in the waters off Bonaire’s Atlantis Beach. With winds blowing from across the island, sailors can make easy launches from this west-facing beach. Photo: Tourism Bonaire

Like other breezy spots in the Caribbean, the north shore of the Dominican Republic was first discovered by windsurfers. They came not only for the consistent winds, but also the varied sailing conditions, which included not only flat water bays for instruction and speed runs, but also ocean swells and beach breaks that became the playground of the world’s best riders. The same conditions now stoke kiters, and a number of the world’s top pros have made Cabarete a seasonal home. There are several IKO (International Kiting Organization) certified schools in the area, and new riders can master the basics in the flat water lagoon at Kite Beach, where consistent side- shore winds make for easy launches. Cabarete Bay is where the experts play, both inside the reef, on the breakers and in open ocean swells. 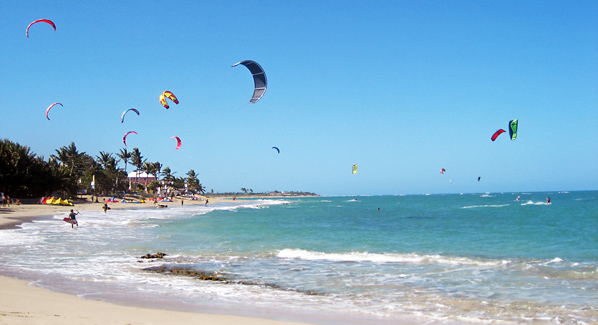 On the north coast of the Dominican Republic, Cabarete Bay has become one of the world’s premier kitesurfing destinations, both for novices and pros. Photo: Remon Rijper/Flickr

Mention the Caymans, and most people think of either scuba diving or offshore banking. Although not as well known as a kiting destination, the island of Grand Cayman has several sites that are well suited to the sport. The prime season for kiting is between November and June, when the easterly trades blow steady. The most popular kiting area is Barkers Beach on the island’s northwest corner. Here, a large sand flat provides waist to chest deep water inside a protective barrier reef, and a large expanse of beach to launch kites without fear of tangling lines with other sailors. On the other side of North Sound, near the Rum Point area, a lagoon known as Kaibo is also popular, and savvy kiters know of a spot on the island’s east end called the Sweet Spot. Here, there is both a reef protected flat-water lagoon, and a chance to move out into open water to play in the waves. 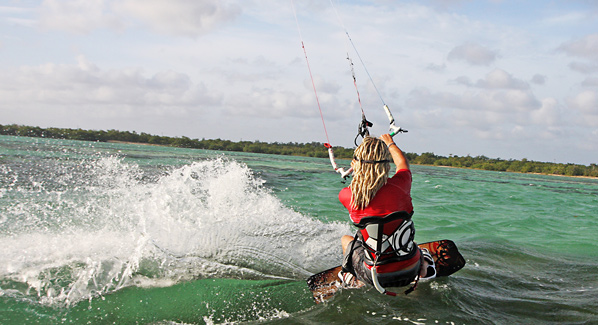 Kiteboarding came relatively late to the islands of the Turks & Caicos, but once sailors discovered what awaited on the southwest shores of the island of Providenciales, it didn’t take long for the word to spread. This three-mile- long beach combines soft, powder white sand with clear waters and expansive shallows. Today, there are four kiteboarding schools on Long Bay Beach, and during the prime sailing season, which typical runs from November to May, aspiring riders fill the expansive lagoon. This entire area has water depths of two to three feet, which creates very friendly learning conditions. Aspiring kiters don’t have to tread water as they recover and relaunch after a spill, and there’s no danger of being blown onto the breaking waves of a reef. The flat waters are also prized by more advanced sailors, who can enjoy three-mile-long speed runs along the shore. 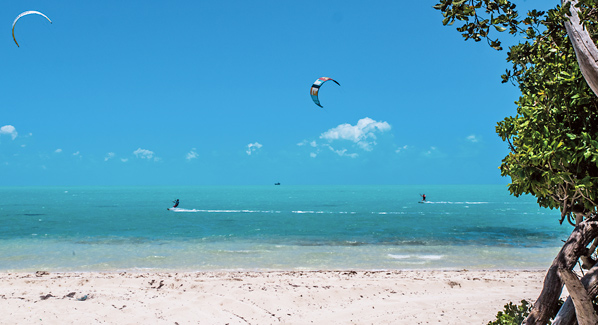 On the Island of Providenciales in the Turks & Caicos, the waters of Long Bay lures kiters with the promise of steady winds and the chance for long, fast runs. Photo: S.Neller/Flickr

Best Caribbean Horseback Riding on the Beach and in the Water