When these ships go down, divers and fishermen benefit

Less than a mile offshore from the mansions and high rises of Palm Beach, a freighter is taking on water. Hundreds of spectators and law environment officials watch from nearby boats, but no one intervenes to stop the sinking. In a matter of minutes, the doomed vessel slips below the waves. Just as planned.

The Ana Cecilia is the latest addition to Florida’s artificial reef program, which has sent more than 100 vessels to the bottom to serve as fish habitats and dive sites. Members of the fleet range from confiscated drug-running speedboats and sloops to a decommissioned aircraft carrier. Prior to sinking, each vessel is stripped of all contaminants and structural hazards that might entangle a scuba diver. It is then towed to a predetermined offshore location. Valves are opened to allow the boat to sink in a controlled manner, hopefully coming to rest upright and ready for exploration. 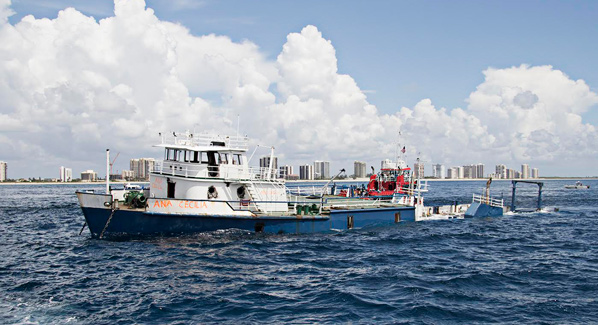 The Ana Cecilia takes on water in a controlled sinking that will allow the vessel to settle onto the sea floor in 90 feet of water, just a short distance from the Palm Beach Inlet and area dive charters. Photo: Walt Stearns

Over time, corals and sponges may begin to overgrow the ship’s steel structures, adding new colors and textures. Fish and lobster will take up residences in the cabins and cargo holds. A star attraction of some wrecks is the massive goliath groupers that can grow up to 600 pounds. Other wrecks attract swilling schools of baitfish or silver-sided tarpon. These wrecks have become favorites with both divers and fishermen. It is estimated that each sunken ship will earn millions in tourism revenue and attract a generous crop of new fish life. 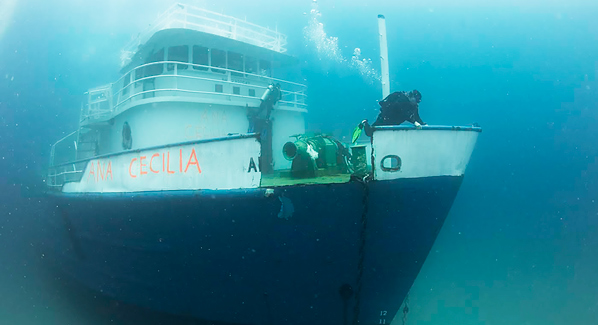 Mere hours after sinking, the Ana Cecilia is visited by scuba divers. Though initially in pristine condition, this wreck will soon begin to squire coatings of coral and sponges. Photo: Walt Stearns