The island of Oahu overflows with attractions and activities- far more than anyone could take in on a single visit. From this long list, we’ve chosen a few of our favorites. Some are simple and obvious, others not so well known, but certainly worth pursuing.

Though its made with ice and a sweet liquid, Hawaiian shave ice is much more than a snow cone. Rather than just trickle syrup over a cone of crushed ice, a frozen block is shaved into micro-fine particles that resemble powdery snow. Fresh fruit juices such as pineapple, guava, mango or passion fruit are then added, and absorbed by this fine powder to create a cool treat that is more creamy than crunchy. 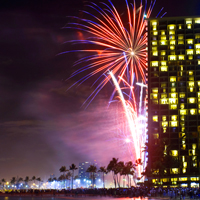 There are few things more spectacular than a fireworks show over water, and in Honolulu, you don’t have to go far or wait long to enjoy such a spectacle. Each Friday night, the Hilton Hawaiian Village Beach Resort & Spa stages a traditional luau that ends with a big fireworks show over the water. You don’t have to attend the party to reap the benefits of the aerial light show, as the colorful explosions are visible from points all along Waikiki Beach. Make your way to the waterfront and settle in with a chair or blanket to enjoy the show.

There are many ways to take to the water in Oahu, but one of the most memorable is aboard a traditional outrigger canoe. The fun escalates when you join a group paddle at Waikiki Beach, where long breaking waves of moderate height are ideal for canoe surfing. These rides are suitable for all age levels, and don’t require the balance or water skills of surfing. All you need do to catch a wave is dig in your paddle when the canoe master says go, and then sit back and enjoy the ride.

You don’t need an ascot or oversize sun hat to take in a match at the Hawaii Polo Club, but you might want to pack a bathing suit and beach blanket. These Sunday afternoon matches have become a favorite island tradition. For a modest admission fee you can set up on the beach side of the playing field, where picnics and barbecues create an atmosphere akin to a stadium tailgate party. For added refreshment, the ocean is just a few steps away. 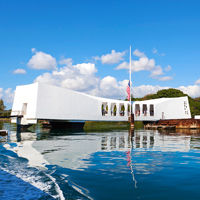 The USS Arizona Memorial at Pearl Harbor should be a must-do stop on any visitor’s list, as it is one of Hawaii’s most significant historic landmarks, and the final resting place of many U.S. servicemen. But there’s more to see and do at this busy naval port, enough to fill an entire day. Other noteworthy stops on a tour of our nation’s history could include a tour of the decommissioned USS Missouri, a trip through the USS Bowfin Submarine Museum & Park and a visit to the Pacific Aviation Museum Pearl Harbor, which tells the story of the air war.

For a taste of how the locals eat, stop by one of the many downtown cafes or any of the roadside diners across the island that serve up a traditional plate lunch. Choose your meat from savory offerings such as kalua pork, Korean barbecue, chicken katsu, beef teriyaki or fresh mahimahi, and it will come with a couple scoops of rice and a helping of macaroni salad. Ask for the mixed plate if you want to sample two different meats.

Delve into Hawaii’s rich cultural and natural history at Oahu’s Bernice Pauahi Bishop Museum. In addition to telling the story of the islands through displays and programs, it houses an extensive regionally-themed library, the world’s largest collection of Polynesian artifacts and a suite of flora and fauna displays that include some 13.5 million specimens of bugs. For a more in-depth experience, sign up for one of the numerous lecturers and educational presentations the museum offers. 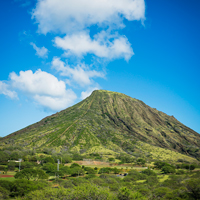 If you’ve done Diamond Head and are looking for another climb that ends with a big view, head to Koko Head District Park near the island’s easternmost point. Here, a relatively short but fairly steep trail will take you up 1,000 feet to the top of Koko Crater, where you can take in 360-degree views of Molokai Channel, Haunama Bay and the Kiliouou Valley. Once down from the summit, you can find easier paths in the nearby Koko Crater Botanical Garden, which is a prime example of a dry-land garden, with plants from the Americas, Hawaii, Madagascar, and Africa growing within a 60-acre crater.

Discover a tasty bit of the island’s past at the Hawaii’s Plantation Village. This living history museum and botanical garden occupies the grounds of a former sugar plantation and tells not only the story of the agricultural process, but also the various ethnic groups who worked the cane fields and processing plants. The settlement consists of some 25 original and restored plantation-era homes and buildings, which house a diverse collection of artifacts and exhibits.

Settle in and let your guide do the work and share some local knowledge on a pedal rickshaw trip through Honolulu’s eclectic Chinatown and notorious (but safe) red light district. Other highlights of the trip could include the Hawaiian Capitol building and landmarks such as the Iolani Palace. Along the way you’ll not only pick up some cultural and historical facts, but also some great insider tips on lesser-known places to visit.