Three vintage hotels reimagined with a fresh look and feel

On Oahu, the place to be is Waikiki Beach. Or close to it. In reality, only a trio of hotels sits right on the sand. The rest are on the other side of Kalakaua Avenue. Some have water views, some are a short walk to the water, and others are a couple of blocks farther inland. If you are okay with being a couple of blocks from the sand, you can save a good bit on the room rates. And you won’t be slumming, especially if you stay in one of these three recently renovated hotels. All have been around for a while in one form or another, but have benefitted from a major facelift or a rebranding in the past couple of years.

The Shoreline was the epitome of tropical modernism when it opened in the 1970s on the corner of Seaside Avenue and Waikolu Way. When it came time for an update, the owners tapped award-winning designer Anthony Laurino. Rather than wipe the slate clean, he used his personal flair to transform the property with sleek, minimalist details that create a 21st century take on island chic, while also paying homage to the property’s 70s origins. Colors, fabrics and furnishings evoke a sense of crisp, clean minimalism, but not at the expense of comfort. Modern amenities such as electronics docking stations, flat-screen televisions and hotel wide Wi-Fi blend with timeless elements such as the natural wood accents, plush rugs and island inspired artwork. 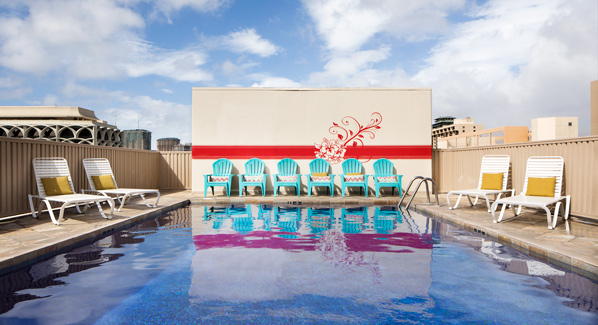 The rooftop pool at the Shoreline Hotel is a compact but convenient space where guests can take a refreshing dip, relax and enjoy skyline views of the city. Photo: Shoreline Hotel

The beach is just two blocks away, and guests also have the option of an intimate rooftop pool. A wealth of shopping and dining opportunities are also within easy walking distance. Closer to home is the in-house dining room of Heavenly Life Style, which channels another trend from the 70s, the health food moment. This all day cafe and diner creates menus around organic vegetables and meats, and fresh local seafood. There is also a coffee station and a small business center near the lobby, but for most guests, the main attraction of the Shoreline is convenience and price. And the fact that this 125-room property is now one of the hippest in Waikiki is certainly a bonus. 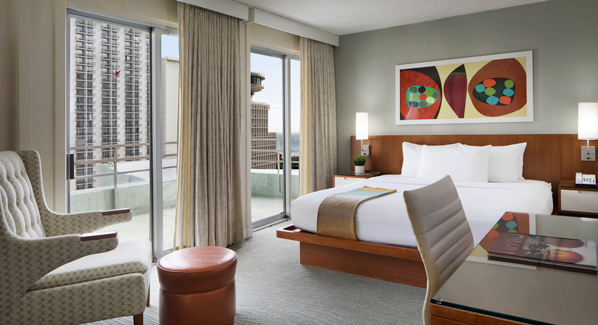 This boutique hotel lives up to the promise in its name. Step into the open- air lobby and you are transported to a quiet tropical oasis where you are surrounded and soothed by lush native plants accented by a koi fish and turtle pond. When this vintage property was acquired by the Aqua group in 2012, they began a multi-year, $2.5 million update that replaced a dated and admittedly drab décor with brighter color schemes, upgraded bedding and modern electronics such as flat-screen televisions, Bose stereo systems and in-room PlayStation consoles. Bathrooms also received full updates, which included jetted tubs. Each room offers a private balcony, and in addition to double and king-bed rooms, there are junior and one-bedroom suites with private kitchens and sitting areas. 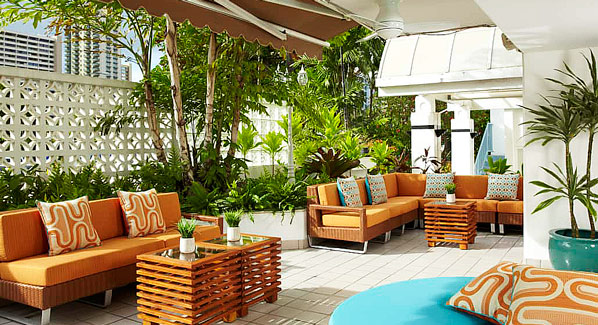 All guests enjoy a complimentary Continental breakfast, morning newspapers and property-wide Wi-Fi. There is a compact pool and sundeck for those who don’t feel like hitting the beach, and the hotel operates a shuttle service to the shopping, dining and entertainment action in Ala Moana. But guests don’t need to travel far to enjoy one of Waikiki’s most trending restaurants. Adjacent to the lobby is Agalico Waikiki. In a setting of modern-rustic ambient, Agalico’s culinary team serves diners an eclectic menu that blends Thai, Vietnamese and Indonesian cuisine with an added island twist. As a perk, guests staying at Aqua Oasis receive a 10 percent discount at the restaurant. 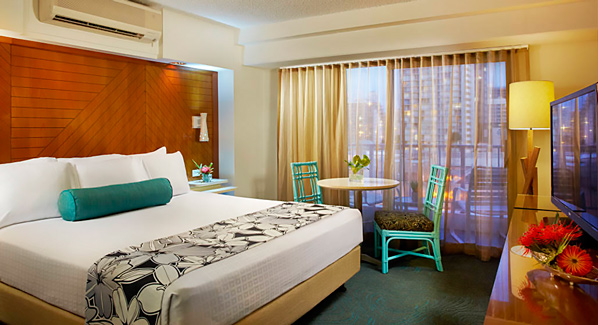 The Swim Club doesn’t just pay homage to 1960s beach culture; it takes a deep dive into this classic era. When the property formerly known as the Hokele Suites reopened in the spring of 2017, it was not just remodeled, it was fully reimagined. Rooms evoke a retro vibe with fabric headboards from Hawaiian clothes designer Tori Richard and wallpaper handcrafted by Honolulu native Andrew Mau. Other surf shack worthy details include reed ceilings, batten walls, island artwork and retro-look woodwork. A stay at the Swim Club can be a group or family affair, as the hotel offers a mix of one room bungalows and one, two, and three-bedroom suites. 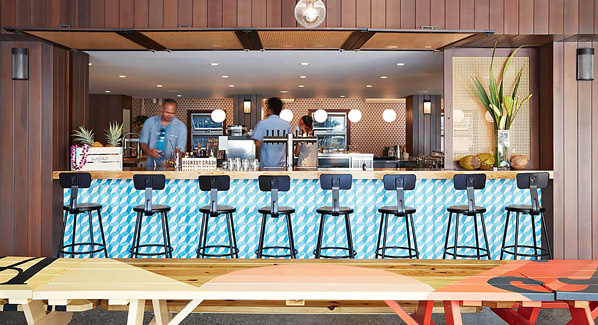 The poolside bar at the Surfjack Hotel & Swim Club is the hotel’s social hub, where guests are often joined by local artists, musicians and writers. Photo: Mariko Reed/Surfjack

As might be expected from a property with Swim Club in its name, the hotel pool at Surfjack isn’t just for dipping after a trip to the beach. The words “Wish you Were Here” are embedded into the bottom of the pool, and for many guests it is the place to be, whether gathering for libations during the happy hour adult swim session, taking in an open-air movie premier on the big screen above the pool deck, or attending one of the regular talks hosted by local or visiting artists, musicians, photographers, filmmakers, architects, professors, chefs, and more. The Swim Club’s onsite restaurant, Mahina & Sun’s, is the work of renowned island chef Ed Kenney, who is known for reimagining and elevating traditional Hawaiian home cooking, and for utilizing local, organic ingredients. Also on site is the Olive & Oliver Boutique, where guests can stock up on unique beach apparel and accessories to get into the island mood. 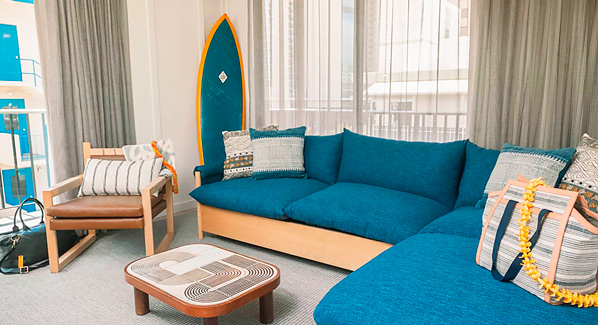 Every element of the rooms at the Surfjack Hotel & Swim Club was chosen to evoke a connection to the classic surf culture of the 1960s. Photo: Surfjack