Mexico’s Yucatan Peninsula is home to some of the prettiest beaches in the world, with powder-white sand meeting turquoise waters. And just behind the beach, the land holds another aquatic delight: underground rivers that emerge from the limestone substrate to create sparkling pools of fresh water. These are the cenotes, and there are thousands of them scattered along the Riviera Maya coastline and hidden in the jungles just behind. Some remain wild, but others have been developed into popular eco destinations, with options ranging from sand-lined coastal lagoons to azure pools surrounded by overhanging cliffs. Here are five of our favorites, all located along the coast between Playa Del Carmen and Tulum, and within a two-hour or less drive from Cancun.

Casa Cenote is formed when an underground river emerges into a coastal mangrove lagoon. This provides swimmers and snorkelers with the best of both worlds, as they can explore the clear fresh waters of the lagoon, where there is a chance of a manatee sighting, then cross the road and walk just a few yards to the beach. There are changing facilities and an equipment rental concession on site, and when hunger sets in, the adjacent open-air restaurant at the Casa Cenote resort serves up a savory mix of local and Tex-Mex cuisines and plenty of cool libations. 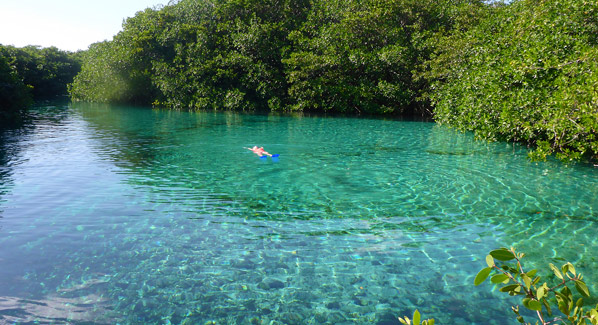 Mangrove thickets line the shore of Casa Cenote, the warm waters of this lagoon provide a refuge for West Indian Manatees. The beach and the Caribbean Sea are just steps away. Photo: S. Prada/ iStock

This expansive coastal lagoon was the Yucatan’s original water-themed eco park, and it remains one of the most popular. Fortunately, it is large enough to accommodate the crowds that arrive on cruise ship days, and those willing to fin their way farther from the entry points can loose themselves in a network of small rock outcroppings undercut by ledges and hidden tunnels. Because the waters are a mix of fresh and salt, they hold a range of colorful tropical fish. In recent years, the park’s original emphasis on swimming and snorkeling has been expanded to include animal encounters and introductory diving experiences.

In addition to immersing themselves in the various land-based natural and cultural programs offered by Mexico’s most popular eco-theme park, guests can don swim trunks and use flotation devices and snorkel gear to drift through a trio of underground streams. Don’t think dark and dangerous, because park designers have skillfully molded the natural waterways into safe passages with vaulted air spaces above, and frequent openings in the tunnel roofs that allow sunlight to stream in. In fact, at points all across the park, visitors who remain dry may catch glimpses of swimmers passing below. 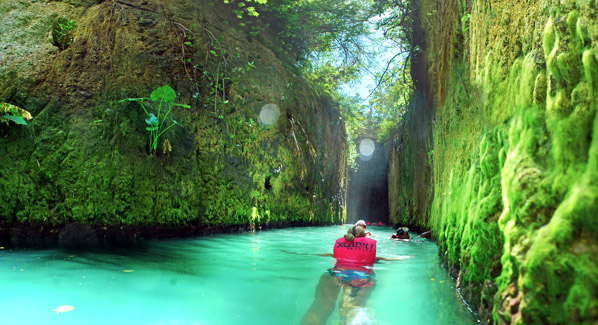 At Xcaret, guests can drift along a subterranean river that runs through the park. Sunlight filters through foliage and skylights cut into the underground sections of the waterway. Photo: Xcaret

Away from the coast, cenotes transition from lagoons to holes in the ground. Literally. Grand Cenote is a large circular basin surrounded by limestone cliffs, and the water is accessed by sets of wooden staircases reminiscent of a scene from an Indiana Jones film. The walls of the cenote are overhung, allowing snorkelers to swim safely into shadow-filled caverns decorated with bone-white stalagmites and stalagmites. The view back into the sunlight from the darker corners of the caverns is dramatic. This site is also popular with divers, and you may see some carrying powerful lights as they follow guidelines into a cave system that stretches below the jungle for miles. 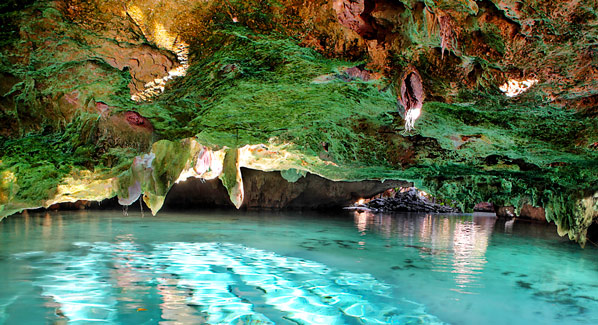 Grand Cenote is a popular destination for swimmers and snorkelers, and the entrance into a vast network of underwater tunnels that challenge the world’s best cave divers. Photo: Dave Mantel/iStock

Though the entrance to this linked pair of subterranean pools doesn’t look all that impressive from the parking lot, it soon opens into an expansive, partially flooded cavern and cave system. This provides snorkelers and scuba divers with a safe yet awe-inspiring glimpse at the Yucatan’s flooded underworld. A guided tour is the best way to experience the labyrinth of passageways and swim-throughs that skirt the shadowed recesses of the cavers. Much of this route will be lit by filtered daylight, but a hand held light will bring out the details of the intricate rock formations. Some tours also lead into an additional cavern known as the Bat Cave, which is fully underground, but brightened by overhead electric lighting. 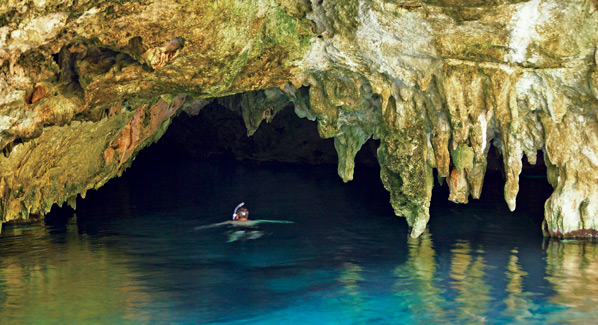 The water-filled boundaries of Cenote Dos Ojos extend into numerous overhangs that allow snorkelers and divers to venture deep into the shadow-filled recesses of the cavern. Kimberly Sue Walker/iStock