Hawksnest? Seen it. Trunk Bay? Been there, done that, got the t-shirt. Once you’ve hit the most popular beaches on the island of St. John, it’s time to head off the beaten path to some of the lesser known, yet equally stunning, stretches of shoreline. Let us take you to our top five secluded St. John beaches, but shh…don’t tell your friends.

The seclusion of a private beach and the renowned beauty of St. John’s north shore come together at Little Cinnamon. Located west of much larger Cinnamon Bay, this private paradise is a short walk through a wooded trail and a quick scramble over a rocky point away from the main beach. Little Cinnamon boasts the same pristine waters and soft white sand as the more popular north shore beaches, along with a curious added bonus: a plane wreck. The wreck of a Cessna that crashed and sank just off the shoreline is still visible, its propeller, engine, and one of the wings peeking out from the sandy ocean floor. 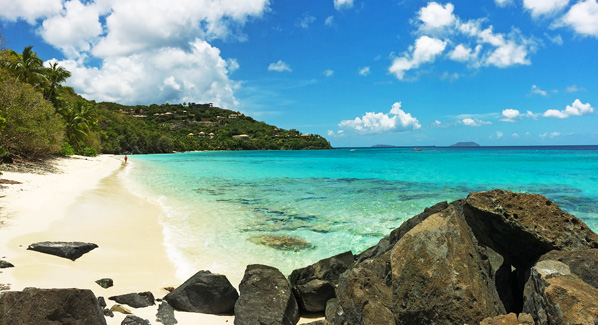 Little Cinnamon Bay is just a short walk from the main beach, but far away from the crowds. The remains of a small airplane make for interesting snorkeling. Photo: Andrea Milam

Sometimes hard work offers the best rewards. Case in point: Brown Bay. This gorgeous, secluded, never crowded beach on the eastern end of St. John’s north shore is your prize at the end of a moderately difficult 30-minute hike through one of the dryer, hotter areas of the island. Soft white sand begs you to plop down for an afternoon nap, but first, take a dip in the bay’s warm waters. The combination sandy and grassy bottom is home to a huge population of conch. Snorkel out toward the point on the east side of the bay and you’ll see a wide variety of corals along with larger fish. 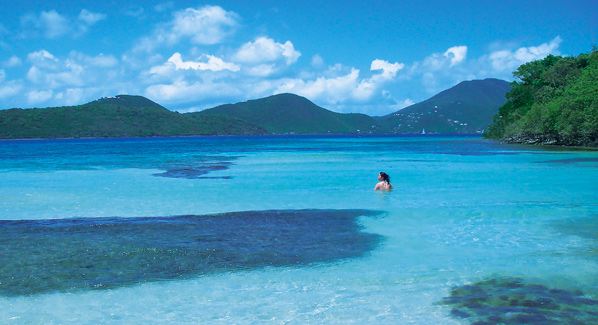 The half-hour hike required to reach Brown’s Bay keeps the crowds away. Those who do make the trip are rewarded with soft white and clear water. Photo: Andrea Milam

There’s a sweet little spot on St. John’s north shore called Peace Hill. It’s got a sugar mill ruin with sweeping ocean views, and is a short, easy walk from a small parking lot. Make the quick trip up the hill to take in the view, but on the way back down the hill, duck left into the bush about 20 yards before the parking lot. About a 10-minute walk down an infrequently maintained but generally quite passable spur trail, Denis Bay is a little slice of often-private heaven. This small strip of pristine white sand boasts excellent snorkeling along with shade if you want it, and plenty of sun if you don’t. 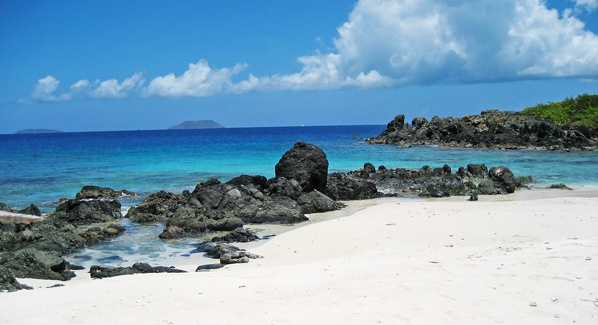 An unmarked by easily passable trail from Peace Hill leads to Denis Bay. Those who make the ten-minute walk will discover good snorkeling and an uncrowded swatch of sand. Photo: Andrea Milam

Hawksnest is arguably one of St. John’s most popular beaches. Go there early and grab a parking spot, then hit the beach and head west. Walk right on past the beach-goers tucked into the shade of the sea grape trees; you know better than them. A short hike through a wooded beachfront trail followed by an easy scramble over a rocky outcropping later, and you’re at your own private beach: Little Hawksnest. This small stretch of soft coral sand is as beautiful as any of the island’s other north shore beaches, without the crowds. Entry into the water is a soft, sandy, gentle slope. Don’t bother on high surf days, however, as the beach all but disappears beneath the waves. 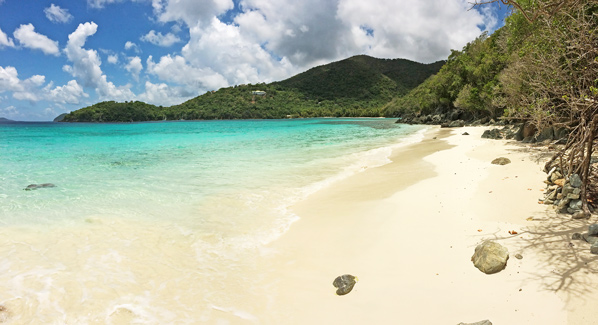 This beach is so far off the beaten path it doesn’t even have a name. On St. John’s East End, past the popular Vie’s Snack Shack and the sign advertising “Hansen Bay,” you’ll see a small dirt pull-off to your left and a large tree shading a small sandy and rocky beach to your right. This modest little patch shares Hansen Bay with Vie’s Beach while maintaining an ends-of-the-earth feel. You may share this beach with a local from time to time, and you’ll most definitely encounter a chicken or two, but for the most part, it’s all yours. 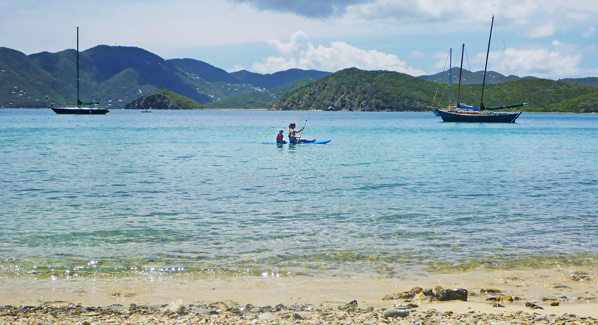 The small, no-name beach that sits at the end of the road to Hansen’s Bay almost guarantees privacy and good snorkeling for those who find it. Photo: Andrea Milam

Back to U.S. Virgin Islands

Off the Path Caribbean Beaches