In the islands, the holiday season takes on a tropical tone

They may not hang stockings with care, or watch for a jolly fat guy breach the chimney, but celebrants throughout the Caribbean have their own holiday traditions. Each island celebrates the season in slightly different ways, but food, fellowship and song are sure to play a central role. Here are some of the ways to ring in the holidays, island style.

On the Spice Island, the holiday season is the time for parang music, where groups of singers and musicians go house to house to serenade friends and family with folk songs that often include ad-lib lyrics with a personal note. The week before Christmas, Grenada’s sister island, Carriacou, hosts the annual Parang Festival, where tunes may take on social and satirical overtones. The sounds of steel pan music also fill the air, as musicians put a tropical riff on holiday classics. Holiday bunting takes a tropical turn in Grenada, as the halls may be decked with bamboo, palm, or coconut, and Christmas trees adorned with nutmeg, cinnamon, or sea shell ornaments. A favorite treat is black cake, which is flavored with dried fruits and infused with spices and the rich flavors of rum. Christmas ham is a must for each household, and seasonal refreshments include sorrel tea, ponch-de-crème and ginger beer. 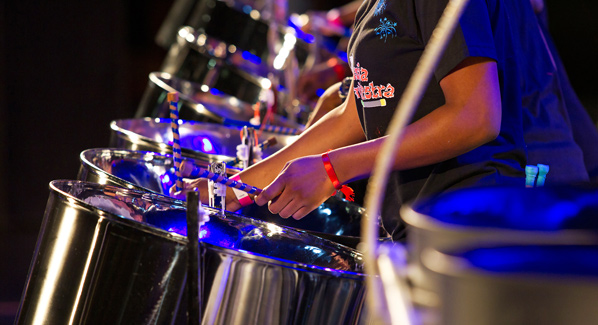 In December, holiday lights brighten the historic buildings of Bridgetown; music fills the air as speaker-equipped trucks take to the streets to spread Christmas music. Two of the season’s most anticipated concerts are the Christmas Jazz Festival and the Carols by Candlelight celebration, which takes place at the gardens of Ilaro Court, the residence of the Barbadian Prime Minister. After the observance of a midnight mass or Christmas morning service, many Bajans flock to a concert in Queens Park for musical performances from the Royal Barbados Police Force Band, Tuk bands and gospel performers. Food is an important part of the season, and visitors can sample an array of Barbadian favorites. Must try dishes include great cake, jug jug and baked ham. Great cakes blend dried fruit and spices with a liberal infusion of Barbados’ famous rum. Harking back to Barbados’ Scottish heritage, jug jug is a porridge-like dish made from green peas, guinea corn flour, herbs and salt meat. The most important part of a Bajan Christmas meal is the baked ham, basted in a pineapple and sorrel glaze. 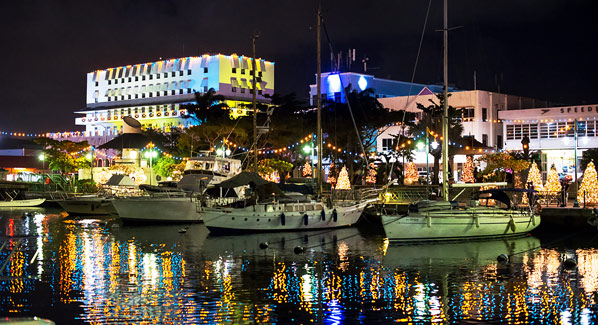 Holiday lights along Wharf Road are reflected in the still waters of Barbados’ Constitution River. Through December, the island’s capital is resplendent in seasonal décor. Photo: Andrew Browne/Barbados Tourism

St. Lucia’s holiday season kicks off with the Festival Lights, an annual celebration honoring the island’s namesake Saint Lucia, the Patron Saint of Light. Residents and visitors are encouraged to make colorful and creative lanterns, which then decorate towns and streets. Another favorite Saint Lucian Christmas tradition is bamboo bursting, which involves the making of homemade fireworks from hollow bamboo canes. In the nights leading up to Christmas, the booms of exploding bamboo stalks can be heard on village streets. Holiday feasts center around roasted lamb or turkey, complemented with local yams and plantains. The traditional desert is the St. Lucian version of fruitcake, made with dried currants, raisins and fruits soaked in red wine for several months before being mixed into the pudding to create spicy, fruity taste. The signature drink is the Caribbean favorite known as sorrel, a refreshing spiced drink that is often mixed with rum and enjoyed during a stroll along the beach.

Seasonal music and special foods are a big part of any holiday celebration, and in Aruba this means Gaita and ayacas. Several weeks before Christmas, Aruban families gather to make a traditional holiday food called ayacas. Though no two family recipes are the same, ayacas are made by smearing plantain or banana leaves with a cornmeal dough; adding a mixture of chicken, pork, or ham, along with a potpourri of spices, prunes, raisins, olives, pickles, cashews, piccalilli, and pearl onions; and folding the assemblages into neat little packets to be boiled in salted water for an hour. These hearty treats can then be kept ready for last-minute holiday parties or served to impromptu visitors.

Ayacas came from Venezuela, and so did Gaita music. Arubans have adopted this Venezuelan Christmas music and made it their own. Gaita bands are typically made up of a line of female singers accompanied by musicians playing the furuku, cuarta, base, piano, tambu. These groups perform at public venues across the island from October through December, with festive rhythms that put passers-by and partygoers into the holiday spirit. Another musical tradition unique to Aruba is Dande, which occurs after Christmas. Dande means “to revel” or “to carouse” in the local language, Papiamento. These small groups of singers and musicians travel to the homes of friends and families, serenading with wishes of success and happiness in the coming year.

In Aruba, Gaita bands perform during the holiday season at homes and in public areas, passing a hat that the audience fills with coins to ensure prosperity in the coming year. Photo; Julien de Bats/Aruba Tourism Authority

The annual Christmas Tree Lighting at Camana Bay marks the beginning of the Cayman Islands’ holiday. The Island is transformed into a tropical version of a winter wonderland with the hallmark 40-foot tree, musical performances by the Cayman National Choir, a Christmas craft market, and a special visit from Santa. The Parade of Lights brings a fleet of colorfully lit boats into the harbor, as thousands watch from shore, and the evening ends with an over-water fireworks show. Throughout December, the island’s National Trust hosts a Christmas Lights Bus Tour, where guests can sample Christmas beef and cassava cake during a guided tour of local houses and gardens beautifully decked out for the season. Musical highlights of the season include the Christmas Carol Concert at Elmsie Church and the Singing Christmas Tree, a pageant which highlights the story of Jesus’ birth depicted through a 25-foot Christmas tree encased with over 5,000 lights, and featuring more than 60 local and international performers. Also popular with locals and visitors are the Christmas Moonlight Movies, which are family friendly flicks shown on a big screen under the stars in Camana Bay. 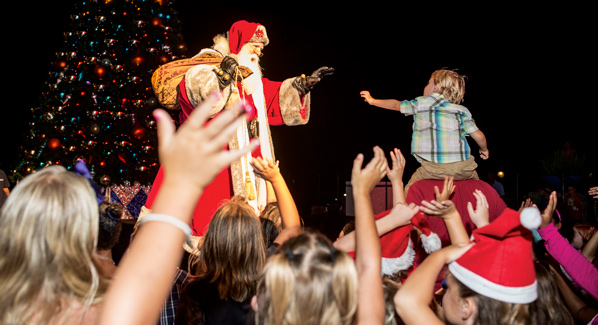 Santa makes a much-anticipated appearance on the island of Grand Cayman. The downtown waterfront at Camana Bay is a focal point for many holiday events, from concerts to boat parades. Photo: Cayman Islands Department of Tourism

Christmas traditions brought from Olde England take on a tropical flavor in Bermuda. In the historic district of St. George’s, historical re-enactors roam candlelit streets, and the sound of classic carols fills the air. Private homes, some dating from the Colonial era, are resplendent in lavish displays of holiday lights, and historic churches are filled with singing and lights on Christmas eve, The mood lightens at the Hamilton Christmas Parade, and goes full tropical on Christmas Day, when hundreds of ex-pats and visitors gather at Elbow Beach for a festive day of food, drink and music. December 26—Boxing Day—puts yet another unique spin on the season with the arrival of the Gombies, traditional troupes of colorfully-attired dancers who move to the sounds of goatskin drums, beer bottle fifes and tin whistles. 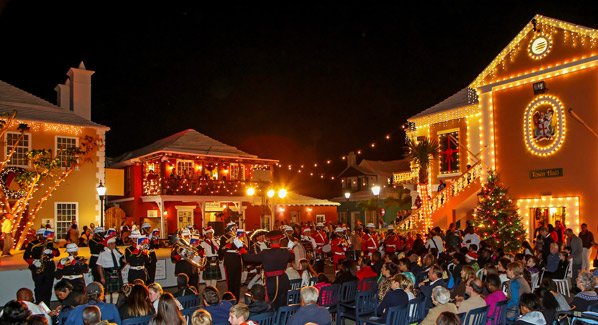 Holiday lights fill the historic district of Bermuda’s capital, St. George’s. Each December, a tradition known as the walkabout brings islanders into the streets for singing and mingling. Photo: Bermuda Tourism Authority

In Puerto Rico, Christmas celebrations start early and keep going into the middle of January. Starting the first days of December, groups stage impromptu parrandas, which are a local version of caroling. In late evening, the parranderos gather quietly at a chosen home of a friend or relative, then burst into song to surprise and wake the occupants. The parranderos are invited in and refreshments, music and dance follow. Christmas Day is the time to gather for lechón asado, the roasting of a whole pig over a fire pit. The cooking begins well before dawn, and continues through the day as friends and relatives gather to gossip and sing. Santa is a recent addition to Puerto Rican culture, and long before the man in the red suit was imported to the tropics, island children looked forward to El Día de Reyes on January 6th, which honors the arrival of the three wise men in Bethlehem. On the evening of January 5th Puerto Rican children fill boxes with grass for the king’s camels, and go to sleep with the anticipation of having the grass eaten, and exchanged for candies and presents. Traditional holiday celebrations continue with a pair of weeklong festivals known as the Octavas and the Octavia, which stretch the season through late January. 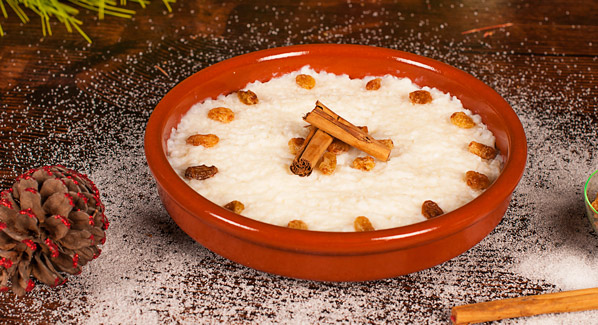 One of the most anticipated holiday observances on the quiet island of Anguilla is the Festival de Noel, which takes place December 18 – 19. This gathering on the grounds of the Old East End School kicks off with competitions and pageantry, caroling, a visit from Santa, and the distribution of food baskets to the elderly. Another island-wide holiday tradition is the annual Christmas Tree Lighting, which kicks off the Festival of Lights display along Coronation Avenue, the main street of the island’s capital. A relatively new tradition on Anguilla is the South Hill Christmas Experience, which is a celebration of holiday traditions and culinary treats hosted by a local village. Like a number of other Caribbean islands with a British heritage, December 26, Boxing Day, is a public holiday.

7 Islands to Visit Before the Holidays