It’s hard to describe the feeling you get when drifting weightless over a living coral reef, engulfed in a cloud of colorful tropical fish and forests of sun-dappled sea fans. For some, it brings total relaxation. Others find it thrilling. Either way, a good snorkel adventure is all about one thing: location. Simply swimming out from a resort beach may yield nothing but a vast expanse of sand desert. But if you pick the right spot to don mask and fins, you can enjoy calm seas, rich sea life and easy access from boat or beach. To help you find your own underwater nirvana, we’ve rounded up some of the best and most easily-accessed tropical snorkel sites in the upper Caribbean and provided some recommendations on where to stay once you resurface. 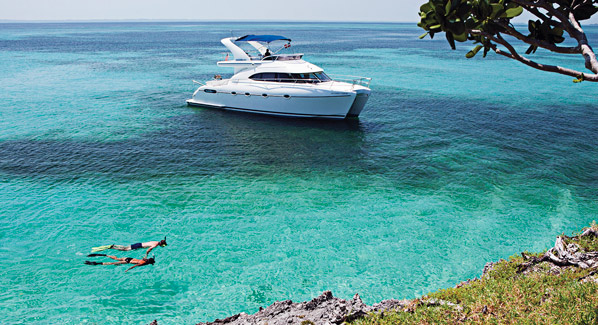 Exploring the shallows in the Pelican Cays Land & Sea Park on the Bahamian island of Great Abaco. Photo: Walt Stearns

The 700-plus islands and rocky outcroppings of the Bahamas offer innumerable snorkeling opportunities. Some require small aircraft transfers, and many more can be reached only by liveaboard dive charters or private boats. The primary resort islands—Grand Bahama and New Providence—offer numerous guided encounters that include everything from family-friendly fish-watching excursions to adrenal-packed shark feeds. Visitors who range into the Out Islands can often find an interesting patch of coral by simply wading out from the beach, and a bit more swimming may bring them to a fringing reef on the edge of blue water. One of the best places to enjoy snorkeling freedom is on the northern end of less-visited Andros Island, with a stay at Small Hope Bay Lodge. The family-owned property has been a favorite of fishermen, divers and solitude seekers for more than 50 years, but its amenities have kept up with the times. The resort offers both guided and DIY snorkel adventures, including trips to the fascinating blue holes that dot the island’s wooded interior. 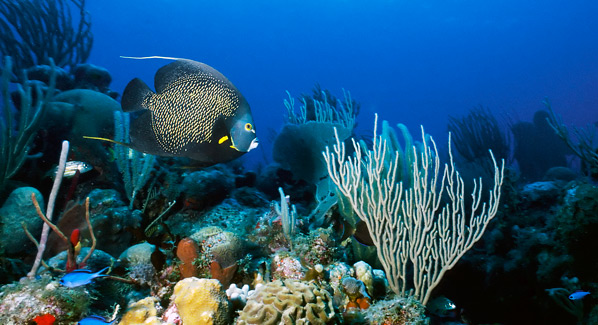 The green jungles and coastal swamps of Belize are flanked by the Western Hemisphere’s longest barrier reef. A number of low lying islands—known locally as cayes—punctuate these reefs, some of which are home to thatch-roofed eco huts offering a true out-island experience. If the Robinson Crusoe lifestyle isn’t for you, Ambergris Caye is your destination. Though no longer the sleepy fishing village it once was, Ambergris still manages to exude a small-town vibe, but with a first-class collection of beachfront resorts tossed into the mix. Finding a snorkel site can be as easy as finning out from the sand to one of the numerous patch reefs. A guide is usually needed for visits to signature sites such as Hol Chan Marine Reserve and Shark Ray Alley, where regular feedings have attracted a resident population of gregarious rays and nurse sharks—relax, they won’t bite. When weather permits, the more adventurous can sign up for an all-day offshore excursion to Lighthouse Reef, home to the famous Blue Hole and the stellar shallow reefs of Half Moon Caye. Accommodations on Ambergris range from idyllic beachfront suites at low-key properties such as X’tah Ha to upscale resorts such as Coco Beach Resort or the fully-cloistered luxury retreat Matachica Resort & Spa, which are a boat ride away from the downtown. 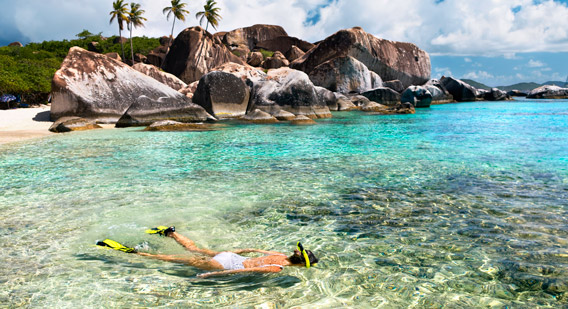 The Baths on Virgin Gorda in the British Virgin Islands provide a dramatic backdrop for snorkelers. Photo: Christian Wheatley/iStock

This group of islands has a number of sites where one could don mask and snorkel and explore the coral-encrusted rocks along the shores of the British Virgins, but most require a boat for access. This proves ideal for those who charter in this sailor’s paradise; land-based vacationers can book a trip through dive shops or tour companies scattered across the major islands. Perennial favorite destinations include the Indians, near Norman Island, and the Baths, Dogs and Prickly Pear Island on Virgin Gorda. For the best self-guided, wade-in snorkeling experience, travelers will have to make their way to the somewhat remote island of Anegada. In contrast to its mountainous green siblings to the south, Anegada is a low-lying coral isle covered in scrub, but blessed with one of the region’s finest beaches, Loblolly Bay. There, you can establish a beachhead at the Big Bamboo beach club before swimming out to discover Horseshoe Reef, home to an enchanting world of coral grottoes and shallow reefs. The Bamboo has cottages for rent in case you linger too long at the open-air bar and loose ambition. If the remote and somewhat rustic isn’t for you, day trips to Anegada can be staged from Virgin Gorda, where you can enjoy a more civilized stay at Little Dix Bay. 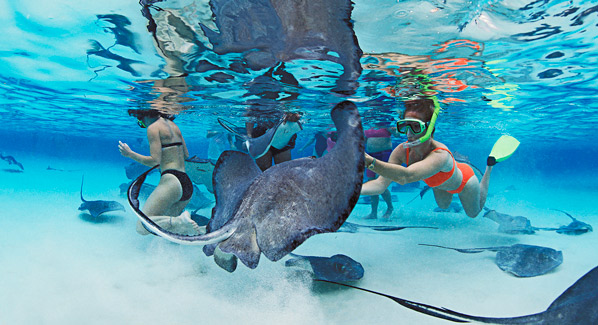 Popular west-end snorkel sites such as Eden Rock and the Cali Wreck are best visited when the cruise ships aren’t in town, lest you find yourself awash in a sea of day-trippers. There’s no avoiding the crowds at much-publicized Stingray City, but it remains a must-do. If possible, book your boat ride with a smaller operator who doesn’t cater to the cruise ships; try to arrive at a slack or incoming tide for best water clarity. To find snorkeling solitude, head for Rum Point, where you can fin out from the palm-shaded beach for a self-guided tour of the north shore’s shallow fringing reefs. To escape the bustle of Seven Mile Beach, stay at the adjacent Retreat at Rum Point. 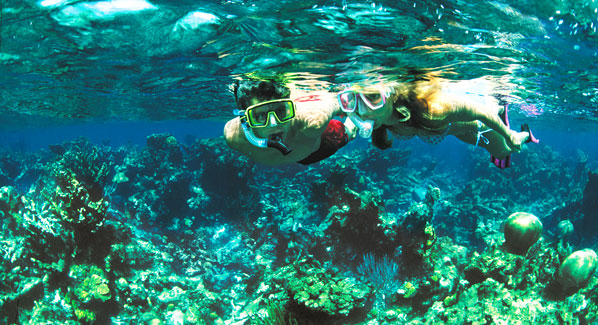 A snorkel trip to Buck Island is an almost mandatory aquatic pilgrimage for visitors to St. Croix. It’s been more than 50 years since this uninhabited island and its surrounding reefs were granted protective status as a national monument. The reefs have held up well to the ongoing stream of human traffic, thanks in part to the marked underwater snorkel trails that guide swimmers through the coral mazes. But Buck Island is far from the island’s only noteworthy snorkel venue. A short swim from any of several beaches along the island’s northeastern shore will lead to less-visited shallow reefs, and there are several waterfront resorts that sit just inshore of great snorkeling. East of Christiansted, the Tamarind Reef Resort offers upscale amenities and a beach that’s just a short swim away from an excellent and well-protected shallow reef that teems with fish life. Other properties within easily reach and lively reefs include The Buccaneer on Mermaid Beach, and, well to the west, the more secluded environs of The Palms at Pelican Cove.