Once considered a novelty, swimming with stingrays has become one of the Caribbean’s most popular aquatic animal encounters. What began more than three decades ago in the Cayman Islands has now spread to locations across the region. Some programs are little more than marine petting zoos, but the best allow humans to interact with rays in a natural setting, and get to know these surprisingly gentle sea creatures.

Grand Cayman’s world-famous Stingray City happened by accident. In the 1970s, local fishermen would stop to clean their catch over a sandbar in the sheltered waters of North Sound. This soon attracted the attention of the resident stingray population, and within a few years, dive masters were bringing tourists to the site to snorkel with the rays. Fast forward 45 years and Stingray City has become one of the Cayman’s signature experiences. Encounters begin with a half-hour boat ride across the sound, and there are actually two sites that the tour operators visit. In the first area, the water is as shallow as two feet, giving participants of all ages a chance to wade and feed the rays. Snorkelers and divers are often taken to a second nearby site, where water depths range from four to eight feet, and the rays are joined by a colorful assortment of reef fish. 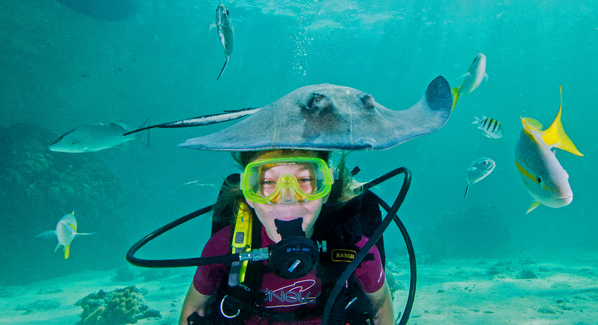 Grand Cayman island is the home of the original Stingray City. At this world famous site, the stingrays come close, and may brush their wings against swimmers and snorkelers. Photo: Douglas Klug/Flickr

Though not as famous as the Grand Cayman original, Antigua’s Stingray City has become one of the island’s most popular attractions. Encounters begin in a cove on the northeast coast, near Seaton’s Village and the Verandah Resort. Participants board small boats for a five-minute trip to a sandbank in the center of the cove, where they disembark onto a floating dock. Guides are provided to help adjust snorkel gear and provide a short briefing, then its time to enter the water by way of steps. Depths on the sandbar are three to four feet, making the adventure suitable for most children and those who aren’t strong swimmers. Those who want to try their hand at feeding the rays are given bits of squid, and shown how to safely present them to the passing animals. 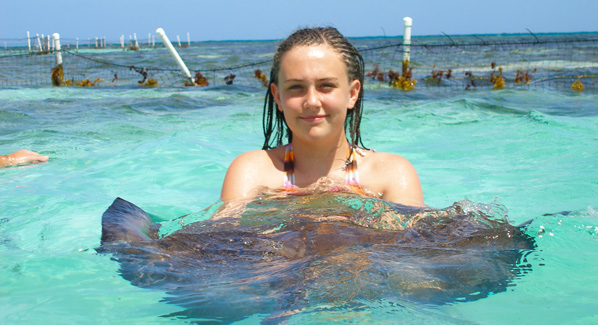 Antigua’s Stingray City is located on a sandbar within a bay located on the island’s east coast. Visitors arrive by small boat, and enter the water from a floating dock. Photo: sshawha/Flickr

There are several stingray encounters available in the Bahamas. Some are staged on the private islands affiliated with various cruise ship lines; others take place on remote Out Islands reached only by small boat or charter flights. The most accessible encounters take place on the small islands surrounding Nassau. A favorite is Balmoral Island, which is reached by way of a 30-minute ferry ride from the cruise ship docks. As part of an all-day beach excursion, guests can spend time interacting with rays in a shallow area close to the beach. This is a wade-in experience suitable for ages five and up, as water depths range from ankle deep to swimming depths. After meeting the rays, participants can spend the rest of their day swimming, snorkeling, sunning and dining. 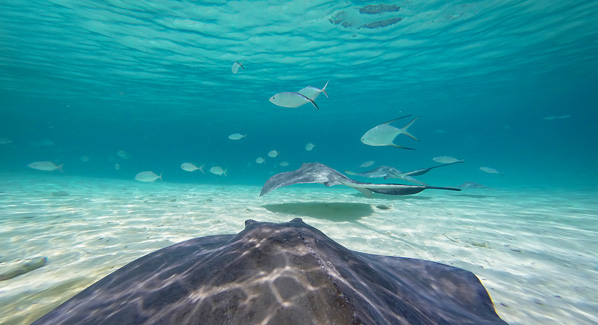 Visitors to Nassau can make day trips to Balmoral Island, where one of the featured activities is the chance to interact with stingrays in a sand bottom lagoon. Photo: Balmoral Island

Stingray pedicures are just one of the unique marine life encounters that are part of an out island adventure with the man known as Bahama Brendal. The owner of Brendal’s Dive Center of Green Turtle Cay offers day trips by small boat to a beach on uninhabited Manjack Cay. Along the way, there is a stop on a shallow reef to swim with green sea turtles, then shallow sandbar where stingrays are sometimes joined by nurse sharks, which are a species that pose no threat to humans. In addition to the usual stingray interactions, guests on Brendal’s trips are encouraged to place small bits of fish between their toes, and allow the rays to glide in and over bare feet. 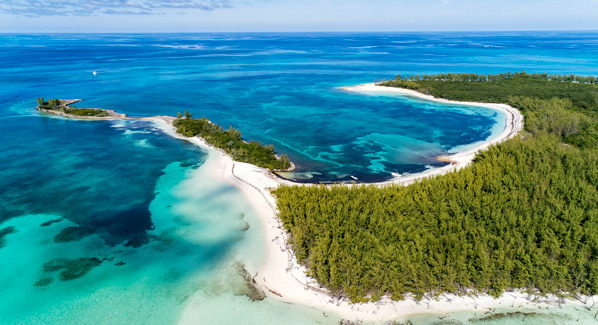 Green Turtle Cay is a small island in eastern Bahamas. Here, visitors can sign up for an adventure cruise that includes a stop at a secluded beach where stingrays gather. Photo: Larry/Flickr

Visitors to the island of Grand Turk can meet the local stingrays when they sign up for a boat trip to the deserted island known as Gibbs Cay. Participants are provided with snorkel gear to explore the shallow reefs that begin just 50 yards from shore, and hold an assortment of colorful tropical fish. The stingrays appear at a nearby sand-bottom area where waters are knee to waist deep. Rays glide around and over bare feet and legs, making light contact. When the rays circle out into deeper water, snorkelers can follow. Back on shore, the guides demonstration the art of cleaning a conch, then transform it into a delicious ceviche. 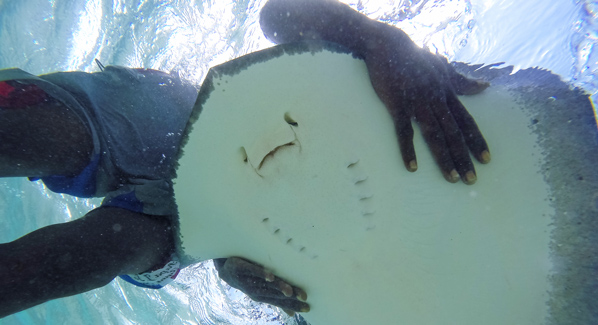 Just off the coast of Grand Turk, the waters of uninhabited Gibbs Cay attract gregarious stingrays, which are not shy about making contact with humans. Photo: Henry Silva/Flickr

Back to Cayman Islands

10 Places in the Tropics for Big Animal Encounters