Summer is a great time to be in the Caribbean. The winter season crowds are long gone, and the locals come out to play. Parties and festivals pop up on islands across the region, offering everything from intriguing cultural experiences to unabashed beach parties. Here are a dozen must-do island parties for the summer.

In the first week of June, the international film community converges on the beach town of Playa del Carmen. Now in its seventh year, the Riviera Maya Film Festival has garnered the attention of film buffs, who come together for showings of award-winning Mexican and international films. The 2017 festival is expected to draw more than 80,000 spectators for both indoor and outdoor free showings, which take place in restored historic cinemas, and in open-air beachfront settings. 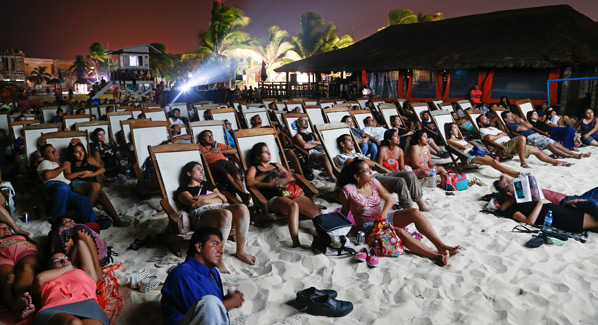 This small island is home to one of the Caribbean’s biggest musical happenings. Now in its 21st year, the three-day event draws some of the biggest names in soca, jazz, R&B, gospel and reggae. Performances are in the evening, but many festival goers gather at Warner Park Stadium early to spread a blanket on the lawn and make a picnic from the offerings of the numerous local food vendors. This year’s festival runs from June 26 to 28. 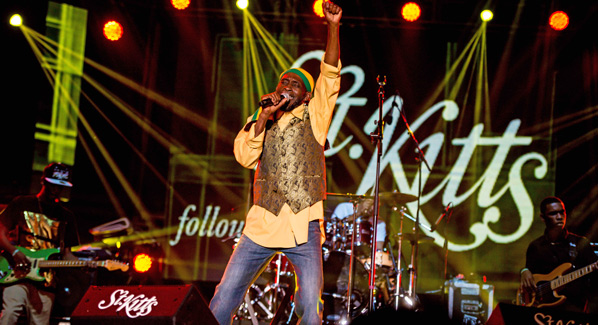 Each year, Puerto Rico celebrates its Spanish heritage in the town of Loiza, with a two-day festival that is equal parts religious observance and street party. Processions honoring St. James bring thousands into the streets to follow large, colorful statues carried on the shoulders of costumed and masked marchers. These observances are followed up with dance shows, music and gatherings of street vendors offering crafts and traditional food. Processions take place on July 22 and 23. 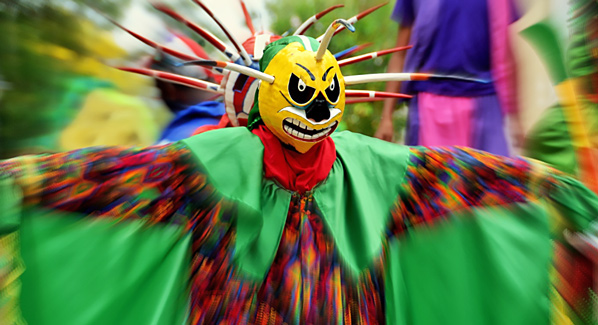 Puerto Rico’s Fiesta de Santiago Apostol has its roots in Spanish traditions dating back 400 years. This annual procession through the streets features masked knights and demons. Photo: Carlos A. Aviles/Flickr

On the first weekend in July, islanders and overseas guests from around the world come together for Bermuda’s most anticipated party. Billed as a chance to “experience Bermuda like a local,” the gatherings include beach parties, boat cruises and floating “raft ups.” Staged as a fundraiser for Big Brothers Big Sisters Bermuda, admission to these parties provides an all- inclusive experience with dancing, libations and live music. 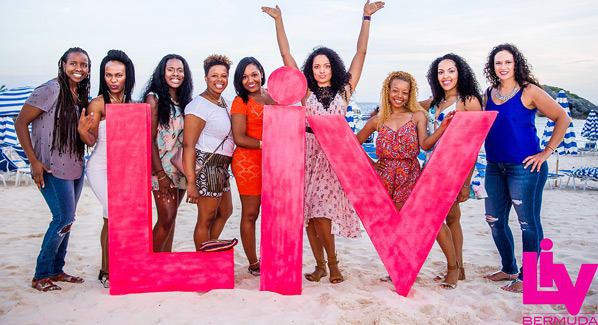 The 2017 edition of LIV Bermuda will take place from July 7 to 10. All- inclusive ticket packages for the four-day event give total access to a range of beach activities, concerts and parties. Photo: LIV Bermuda

No need to wait for Christmas to experience the sights and sounds of the Bahamian Junkanoo. Each Saturday in the month of July, the waterfront at Nassau’s Arawak Cay comes alive with drumming, dancing and music as costumed troops strut their stuff and compete for top honors. The revelry starts at noon and lasts till midnight, and when it’s time for refreshments or a nosh, onlookers can duck into one of the many pubs or seafood restaurants that line the cay. 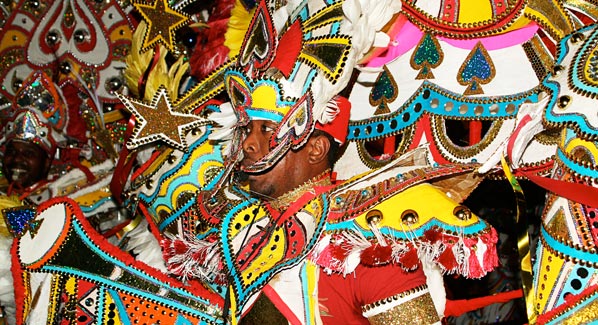 Each summer, flotillas of pleasure boats depart Puerto Rico for the Virgin Islands for a week of gatherings and beach parties that have been given the name “Christmas in July.” But you don’t have to own a boat to enjoy the fun, as beach bars through the U.S. and British Virgins welcome one and all with day-long celebrations that start with volleyball tournaments and barbecues and end with evening fireworks and live bands that keep revelers dancing on the sand till the wee hours. 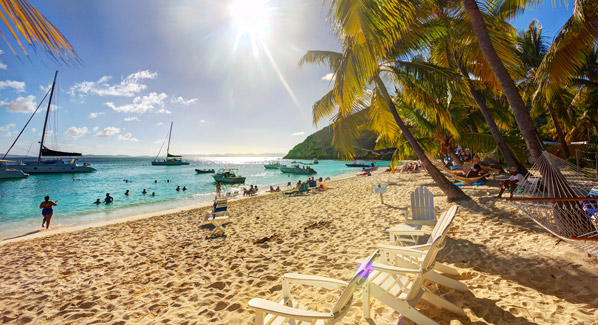 Christmas in July is the whimsical name for the mid-summer invasion of the Virgin Islands by fleets of vacationing Puerto Rican boaters. Destinations such as White Sound are favorite stops. Photo: Michael Rubenstein/Flickr

One of the longest-running festivals in the Caribbean takes place on the otherwise quiet island of Anguilla. The 40th anniversary of this island-wide celebration will include beach parties, sailing races, pageants, parades, calypso concerts and more, each staged at different villages and resorts around the island. A highlight of the festival is J’ouvert morning, when a street jam begins at 4:30 a.m. when floats, drummers and festival-goers parade from the island’s capital to the beach at Sandy Ground for a day of music, food and water sports. The festival runs from July 2 to August 10. 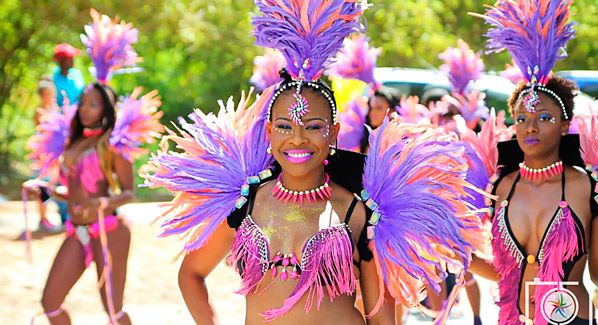 Jamaica’s largest music festival is also the island’s biggest party. The weeklong celebration is staged at Montego Bay, and features local reggae and dancehall artists. Before the music starts, the fun kicks off with a beach party, a musical day cruise and the famous “All White Party.” When the concerts get underway, audiences arrive with their own “reggae beds” — flattened cardboard boxes for sitting and chilling between dance sessions. The 2017 Sumfest runs from July 16 to 22. 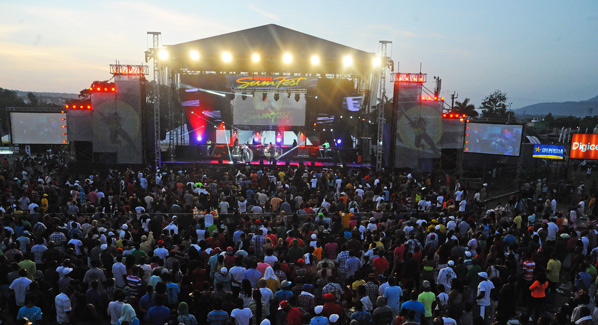 Crowds gather at the main stage of Reggae Sumfest, which is Jamaica’s largest and most acclaimed music festival, with an international lineup that includes the biggest names in reggae and dancehall music. Photo: Jamaica Tourist Board

On Barbados, one party isn’t enough. The annual Crop Over is a three- month string of celebrations that dates back to the island’s colonial-era agricultural roots, when the end of the harvest season became a time for relaxation and revelry. The tradition continues with a three-month series of festivals, concerts, cultural events, and street parties. A highlight of the season is the “road march”, when troops of costumed revelers take over the streets of Bridgetown on Kadooment Day. This annual parade turned street party takes place on August 7. 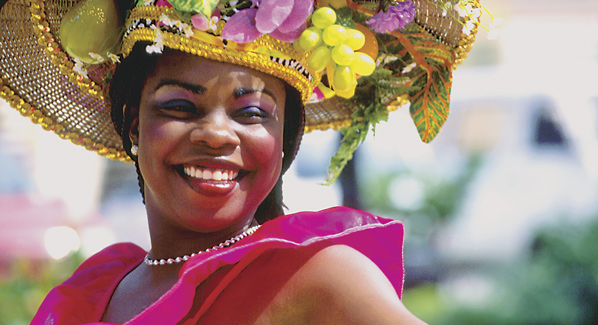 The culmination of Bardados‘ three-month Crop Over celebration is the Grand Kadooment, a carnival-like parade that features large bands with members dressed in elaborate costumes. Photo: Barbados Tourism

On the last week in July, the island of Antigua explodes in a riot of feather– clad costumes, bright body paint and floats booming heavy calypso beats. The party kicks off in the capital St. John’s with J’ouvert, where steel drum musicians, calypso and soca singers entertain crowds of revelers. Over the next ten days, towns across the island will stage music competitions, local food fairs, cultural shows and cultural workshops that create chances for visitors to immerse in the local culture and join the fun. Carnival time starts July 26 and runs till August 5. 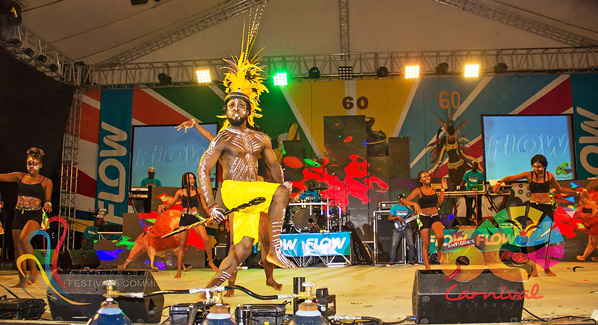 The sister island of Trinidad may be home to the Caribbean’s best-known carnival, but Tobago also knows how to throw a party, and it spreads the fun out over two weeks from July 17 to August 1. Heritage Festival is an island- wide happening, with each village and community staging events such as concerts, street parades, storytelling sessions, folk dances and African drumming sessions. The island’s heritage is celebrated with unique events such as goat races and historical re-enactments. 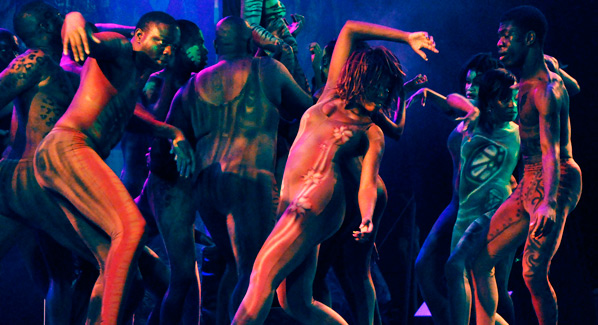 Modern dance melds with traditional cultural roots during a live performance staged for Tobago’s annual Heritage Festival. Staged by local communities, the performances are open to all. Photo: Terrell George/Flickr

In keeping with its reputation as a regional center of art, culture and sophistication, the island of Curacao welcomes some of the biggest names in soul, jazz, hip-hop and R&B to its iconic jazz festival. Headliners for 2017 induce Bruno Mars, Chaka Khan, Dianne Reeves, Nile Rodgers and Chic, and Juan Luis Guerra, with performances taking place on three stages. In addition to the all-star acts, the festival is known for it’s lively after parties, which often keep going all night. The two-day happening takes place on August 29 and 30. 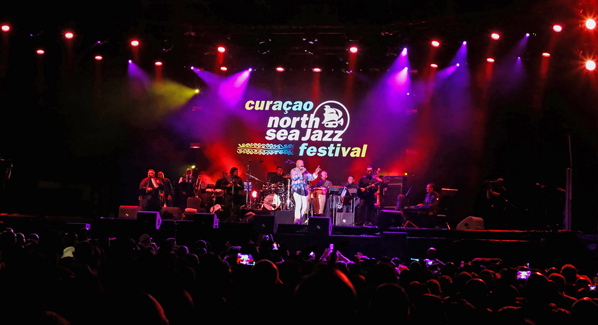 Curacao’s North Sea Jazz Festival is the Caribbean’s version of the original performance event of the same name that is held each summer in the Netherlands. Photo: Wassef Sokkari/ Curacao Tourist Board

Where to Celebrate New Year’s Eve in the Caribbean