The islands of the Caribbean are ringed by coral reefs. These colorful underwater gardens are special places. But some are more special than others. There are a number of qualities that put certain sites at the top of divers’ and snorkeler’s aquatic bucket lists, including the clarity of the water, the health of the corals and the variety of fish life. When these factors are tallied up, a handful of reefs always top the list. Here are five of the best.

The entire island of Bonaire is surrounded by a marine park that protects some of the most vibrant coral reefs in the Caribbean. At points all along the island’s calm western shore, divers and snorkelers can wade in from shore to discover a wealth of underwater diversity. But to discover the very best of Bonaire’s underwater treasures requires a short boat ride to the small, uninhabited island of Kline Bonaire. There isn’t much to look at above the surface, as the land is a barren limestone plateau almost devoid of vegetation. Slip below the waves, however, and you will be immediately immersed in riotous growths of colorful soft corals and sponges. The exceptionally clear water allows ample sunlight to penetrate and brighten this underwater garden, which begins just below the surface and continues into the depths in a series of slopes and ledges. 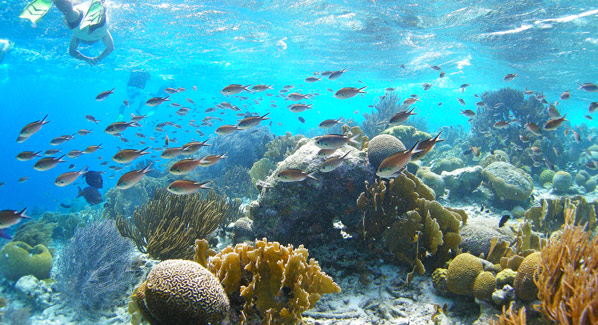 The shallow reefs of Kline Bonaire give snorkelers a prime window to the underwater world. These sites are noted for colorful coral formations and abundant fish life. Photo: David Stahl/Flickr

Imagine hovering weightless on the face of a sheer cliff that drops vertically into unseen depths. This is wall diving, and for many, it is the Holy Grail of scuba. The Cayman Islands have long been a mecca for wall diving, as they sit atop oceanic plateaus that plunge dramatically into the depths just a short distance from shore. The most famous of these aquatic precipices is found off the northern shore of Little Cayman island. While most underwater walls in the Caymans start at depths of 70 to 80 feet, Bloody Bay Wall rises to within 20 feet of the surface, and then falls away abruptly to a depth of more than a mile. Adding to the drama is the site’s extremely clear water, which creates the illusion that divers are floating in air. For added adventure, there are canyons and tunnels that cut into the wall, creating an underwater maze ripe for exploration. 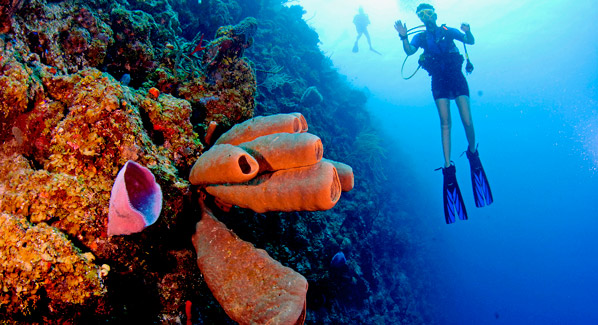 A diver hovers on the face of Bloody Bay Wall. This mile-long underwater formation is the prime attraction on quiet Little Cayman island, which is home to fewer than 200 people. Photo: Erwin Poliakoff/Flickr

Marine life thrives on the nutrients brought by moving water. And the steady oceanic currents that wash the western shores of the Mexican island of Cozumel create a bountiful buffet for both fish and corals. Small wonder that Cozumel has remained one of the Caribbean’s top diving destinations for more than 40 years. In addition to nurturing a rich variety of marine life, the moving waters are ideal for drift diving—a technique in which divers are dropped at one end of the reef, then picked up by the boat down current after enjoying the underwater equivalent of a soaring Superman flight. A series of shallow coral formations closer to shore allow novices and snorkelers to get in on the action, but the big ticket are the outside reefs, which rise on the edge of an underwater abyss that plummets to unseen depths. 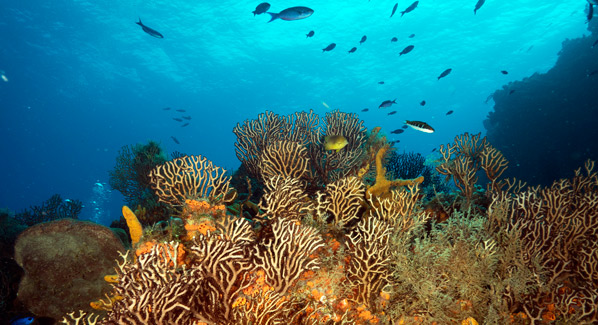 At Cozumel’s Palancar Reef, a grove of gorgonians extends webs of finger– like appendages to capture nutrients carried by the currents that wash over this site. Photo: Tam Minton/Flickr

One of the thrills of diving is never knowing what might swim up from out of the blue. And one of the best places for these chance encounters are the reefs of West Caicos island. Here, just a chip shot from shore, a coral- encrusted sea wall faces the open ocean. These reefs are especially colorful, home to huge, bright-orange elephant ear sponges and multi-hued vase and barrel sponges. Stands of pillar coral shelter colorful butterfly, angel and parrot fish, along with large groupers, toothy barracuda and swirling schools of jacks. As captivating as these reef scenes can be, divers often keep one eye on open water while exploring these reefs. At any given moment, a squadron of spotted eagle rays may glide by, a curious sea turtle may come in for a closer look or patrolling reef shark may be seen in the distance. For the truly lucky, there may even be a visit from a passing pod of dolphins, and each winter humpback whales have been known to swim by on their way to southern breeding grounds. 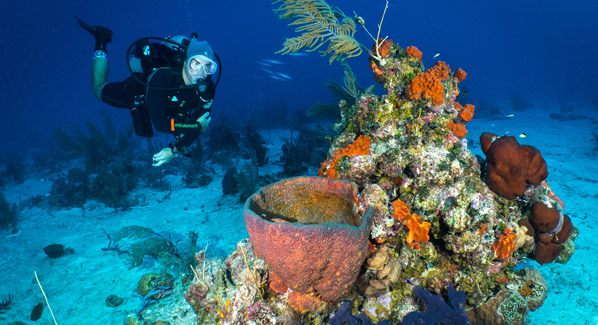 A coral head near West Caicos island becomes a gathering point for numerous species of tropical fish, while the crevices hide lobster and crabs. Photo: Benignorco/Flickr

Gardens of the Queen, Cuba

When Christopher Columbus sailed into this archipelago of 250 coral and mangrove islands on Cuba’s southern coast, he was overwhelmed by the beauty of the waters, and christened the area Jardines de la Reina—Gardens of the Queen—to honor his Spanish Queen Isabella. These waters later caught the attention of another historic figure. In the 1990s, Fidel Castro declared the entire area a marine sanctuary, and banned all forms of commercial fishing and industry. A diver himself, Castro was reputed to enjoy exploring the reefs in his younger years, and considered the waters to be his private fishing spot. The gardens have since been opened for limited dive tourism, and those who visit proclaim the reefs to be the most vibrant and pristine in the entire Caribbean. As an added bonus, divers can move from the corals into nearby grass beds and mangrove lagoons that hold a wealth of juvenile fish species. The truly adventurous can seek out the North American crocodiles that visit certain reefs, and are said to be non– aggressive when encountered in clear water. 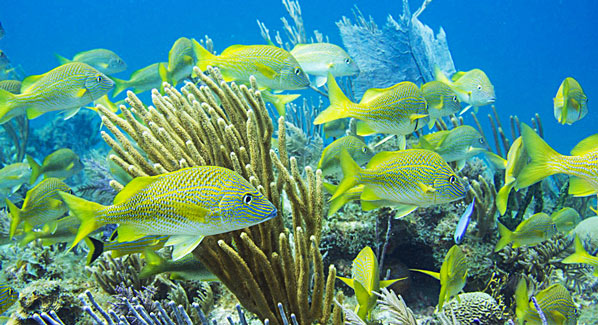