Florida has reinvented the traditional boardwalk, creating some easy- going and beautifully landscaped public walkways that go beyond seaside breezes and vistas. Though the views are quite spectacular, you’ll find public spaces where you can meet people, dine on seafood, do a bit of shopping, dance under the stars and even rest your head at a luxury hotel.

In 2007 Hollywood Beach, tucked between Fort Lauderdale and Miami Beach, unveiled its 2.5-mile Broadwalk. The paved path that butts up against the sand and shore added a new spark to this retro beach town, which dates back to the 1920s. Lining its west side are the old-school beach cafes, bars and pizzerias where locals have been eating and drinking for years. Only now these mom-and-pop places like Little Venice and Jake’s on the Beach are packed more than ever. Walk it, bicycle it, jog it or just sit at an alfresco table and take in the scene. During season, November to April, Canadian vacationers, who for decades have fancied Hollywood as a winter getaway destination, join the locals, who descend from nearby high-rises. Almost every night, a toe-tapping crowd of all ages finds music and dancing at the Hollywood Beach Theatre, yes you can boogey under the stars at this band shell located on the Broadwalk at Johnson Street. Watch for the arrival of its new neighbor, the Margaritaville Beach Resort, and a spiffed-up band shell in spring 2015. 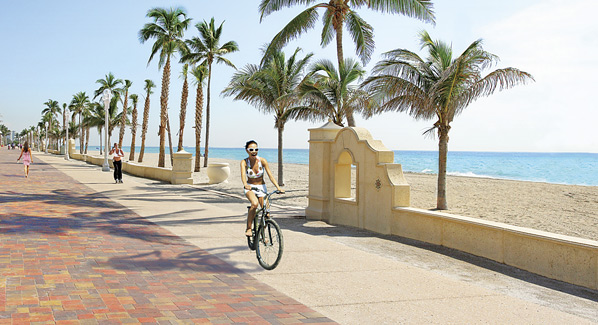 Hollywood Beach’s Broadwalk has re-ignited this retro town, which is now one of South Florida’s most popular gathering spots both day and night. Photo: City of Hollywood

From the sky, the Beach Walk in Clearwater Beach looks like a snake wiggling its way up the Gulf Coast, with white sands to the west and green swaths dotted with rows of feathery palms to the east. Clearwater Beach has always been a family-friendly beach town, and the paved path has made it super easy for adults and kids to access the sands and stop at points along the way. The Beach Walk starts at the iconic Pier 60, a fishing pier and park where entertainers and vendors gather nightly for the Sunsets at Pier 60 event. As you head south alongside Gulf View Blvd., you’ll pass the pink Hyatt Regency Clearwater Beach Resort & Spa, before you come upon Surf Style, a trendy one-stop beach store that’s home to the indoor FlowRider wave machine for wannabe surfers. The path ends just south of 5th Street near the Marina District, where dive, fishing and sightseeing vessels dock and Crabby Bill’s serves up the fresh catch. Beach Walk has not only marked the beginning of this seaside community’s rebirth, but has triggered plans to revitalize the Marina District, including the Beach Walk’s extension to the Intracoastal side of Clearwater Beach and a facelift for Pier 60 Park in 2015. 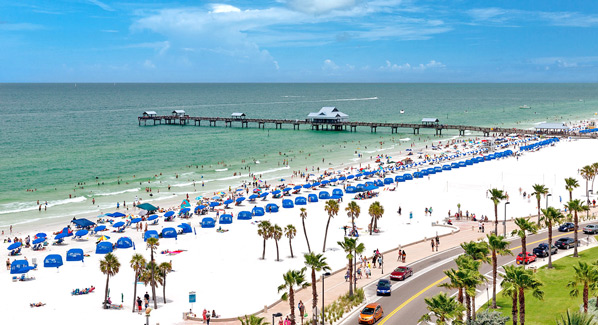 Designed extra wide, the Beach Walk along the Gulf of Mexico makes Clearwater Beach one of Florida’s most walkable towns, where shops, restaurants and its pier are easy to reach. Photo: City of Clearwater Beach

For the visitor who wants to get acquainted with Miami Beach’s long stretch of golden sand, the boardwalk, running along the Atlantic Ocean from 21st to 78th streets, is a great place to start. This commercial-free stretch puts you in touch with nature and is ideal for an early morning run as the sun reflects on the water. Towering palms and sea grape trees give the elevated walk its tropical beachside vibe and lining its other side is a mix of art-deco buildings and modern hotels, with icons like the Fontainebleau and Eden Roc at 45th Street. It’s easy to peek into the pool areas of these glamorous hotels as you stroll the boardwalk alongside buff runners in flashy workout clothes and moms pushing designer baby strollers. But if you listen carefully you’ll hear a medley of languages spoken, as the boardwalk is a favorite with international visitors staying at the big-name hotels. To make the boardwalk user friendly the city has marked the wooden poles every quarter mile so you can calculate your jog or let friends know what part of the beach you are closest too. 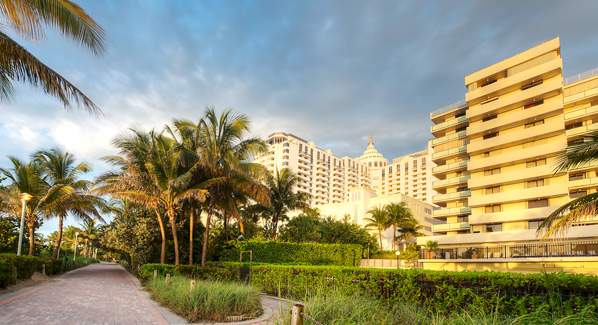