In the nation's southernmost city, it isn't the same old ball drop

This New Year’s Eve, don’t drop the ball. Instead, head for the nation’s southernmost city, Key West, where the final seconds of December 31st are also measured by dropping objects of a much more colorful nature than a lighted globe. Here are three of the islands’s most famous traditions.

Winching Down the Wench

In the heart of Key West’s historic waterfront, celebrants can welcome the New Year like a sailor on shore leave. The center of the action is the Schooner Wharf Bar, which is located a few blocks from Duval Street. The revelry gets underway mid afternoon with live music and street dancing on the shores of the Key West Bight. As midnight approaches, all eyes are drawn to the topmast of the tall ship America 2.0, which is moored alongside the bar. Perched 75 feet high atop the ship’s main mast is a costumed pirate wench, who is lowered from the ship’s rigging as cannon blasts welcome the New Year. Then, in the best traditions of rowdy seafarers, the music and revelry continue until four in the morning. 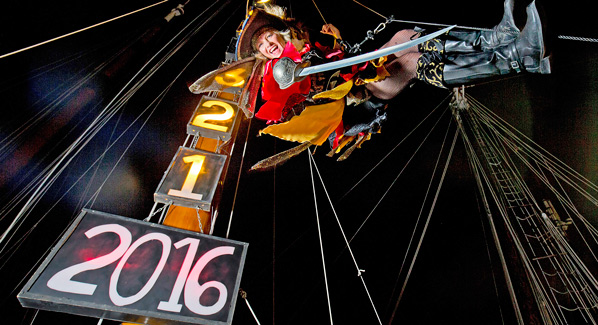 On an island often referred to as the Conch Republic, it should come as no surprise that for the past 24 years revelers gather at the corner of Duval and Greene Street on the night of December 31st to watch a giant sea shell descend from the roof of Sloppy Joe’s Bar. The party gets started around 10 p.m., when a DJ spinning from the rooftop of this landmark watering hole kicks off a dance party on the closed off streets below. The countdown to midnight is displayed on a giant clock, and then the outsized conch descends in an eruption of confetti and streamers. The party continues into the wee hours of the morning both in the street and with live music on the bar’s indoor stage. 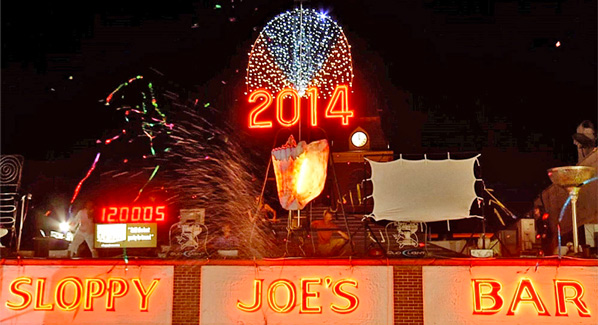 While the shellfish theme dominates at Sloppy Joe’s, sushi is the main attraction a few blocks to the south. In the heart of Duval’s lively street scene, a giant red high heel shoe hangs from the balcony of the New Orleans House. Now in its 20th year, the shoe drop is the inspiration of drag queen Sushi, aka, Gary Marion, who created the original outsized wedge from paper mâché and chicken wire some 20 years ago. Today, the celebrity performer makes the midnight drop in a more durable piece of fiberglass footwear, which receives fresh coats of paint and glitter in preparation for the festivities. Thousands gather in anticipation of the drop, which is proceeded by performances by Sushi and other entertainers. News crews from national networks set up shop to broadcast the drop to audiences around the globe. 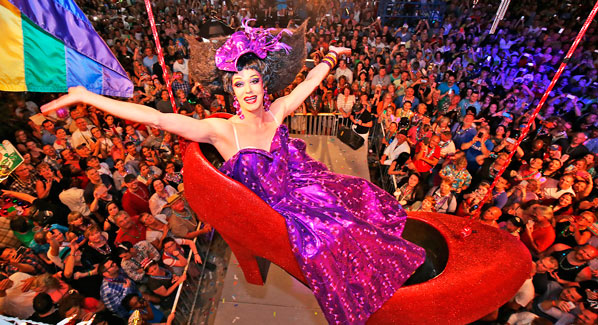 Back to Key West