The clear waters that wash the shores of Hawaii can seem very enticing when you are gliding across the surface in a kayak. So go ahead, jump in. But first, grab a mask and snorkel so you can fully appreciate the colors of the corals and follow the meanderings of the brilliantly hued tropical fish. If this sounds like your idea of a great day on the water, check out these seven combo trips that showcase the full beauty and diversity of the islands.

One of the most popular kayaking destinations in Oahu is a pair of small, deserted rock islands known as Na Mokulua, which locals refer to as “The Mokes.” The most popular starting point for the three-quarter-mile paddle to the site is Lanikai Beach, where there is no shore break to contend with. The smaller island, Moku Iki, remains off limits, and all landings happen on a beach on the larger island, Moku Nui. Snorkelers will find coral formations that begin in clear water right off the beach. Several tour companies run guided trips to the Mokes, and more paddlers make their own way in rented or personal kayaks, which means the place can get pretty busy on weekends and holidays. 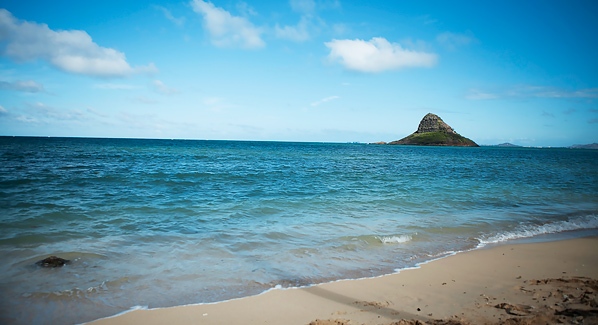 Moku Iki is one of a pair of small islands that lie off the east coast of Oahu. It remains off limits, but kayakers can paddle to a beach on nearby Moku Nui. Photo: Hawaii Tourism Authority

Fans of vintage television may be thrilled to hear that a trip to Coconut Island lands them on the location once used in the show Gilligan’s Island. But the castaways wouldn’t recognize the island these days, as it is now home to a research center operated by the Hawaii Institute of Marine Biology. Trips begin at Heeia State Park, and make a half-mile crossing of Kaneohe Bay, which is fully sheltered from offshore waves. After touring the research facilities, the next stop is Horseshoe Reef, where snorkelers can explore the coral formations of Oahu’s only true barrier reef. This area is often home to sea turtles and eagle rays. 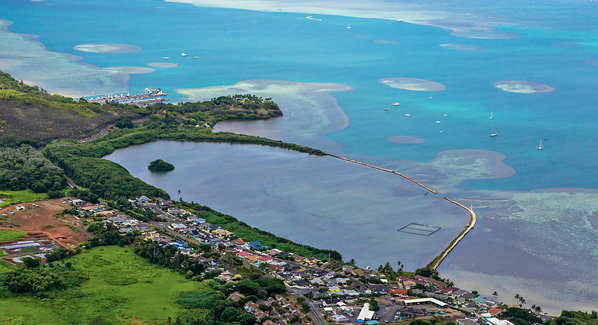 Kayak tours that begin at Heeia State Park pass by a historic fishpond before crossing the bay to Coconut Island and the snorkeling sites of Horseshoe Reef. Photo: Hawaii Tourism Authority

The fish sanctuary at Maui’s Honolua Bay is one of the island’s best snorkeling venues. Due to limited and unsecured roadside parking and a lack of shore facilities, the site is best reached by water. As an alternative to big tour boats, several companies launch paddle trips from the nearby beaches at Kapalua, and head west along a shoreline of low cliffs and hidden bays. Tours usually include a stop on a small beach, and then head to the shallow western side of the bay where the best snorkel reefs are located. Summer is the best time for this excursion, as winter waves turn the outer reaches of the bay into a popular surf break. 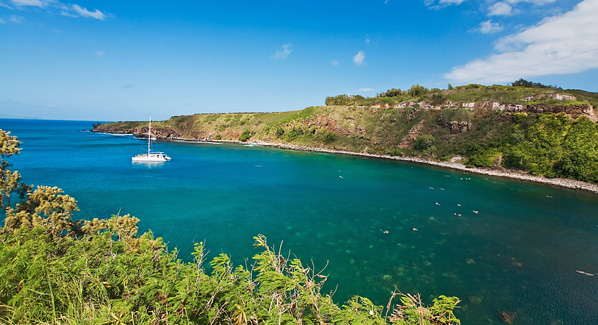 A paddle around the headlands of Maui’s north coast leads to the marine preserve at Honolua Bay, which is home to some of the island’s best coral reefs. Photo: Hawaii Tourism Authority

The section of Maui’s south coast between Makena and Wailea has earned the nickname “turtle town” for the large number of sea turtles that are seen year-round on coral formations close to shore. There are more than a dozen reefs in the area that are visited by tour boats, which can put dozens of snorkelers in the water at one time. To avoid the crowds, savvy paddlers go early and join a small group tour led by guides who know the area, and are able to seek out sites away from the crowds. As a bonus, the trip to and from turtle snorkels takes in big views of Mount Haleakala and the offshore profiles of Molokini and Lanai. 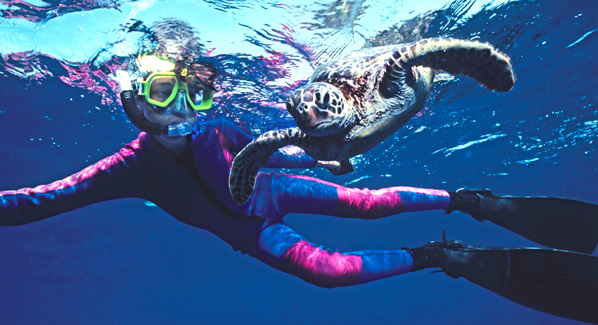 Sea turtles can be found on coral reefs all around the islands of Hawaii, but tend to gather in greater numbers on the reefs along Maui’s south coast known as Turtle Town. Photo: iStock

The Big Island’s signature kayak and snorkel combo takes place in a marine preserve on the island’s west coast. History buffs will note that Kealakekua Bay is the site where the first westerner, lead by Captain James Cook, landed on Hawaii Island. The shores are also the site of the sacred temple, Hikiau Heiau, dedicated to the Hawaiian god Lono. The bay is a favorite with both divers and snorkelers, as it is filled with vibrant coral reefs that are a home to a diverse range tropical fish, and often visited by schools of spinner dolphins. Permits are required for snorkeling or landing on the shores of the Captain Cook Monument, so it is best to book a trip with one of the several tour companies licensed to operate in the preserve. 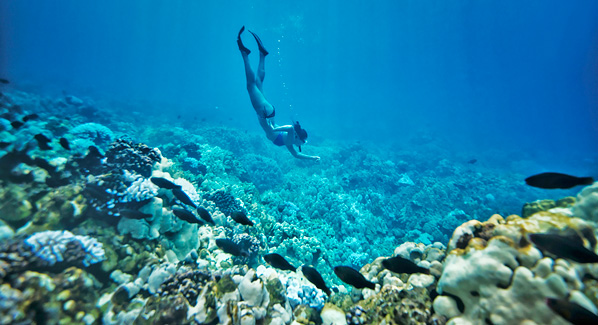 A snorkeler begins a free diving plunge into the clear waters of Kealakekua Bay, which is known for its abundant fish life and colorful coral formations. Photo: Hawaii Tourism Authority

Just outside the village of Kailua, paddlers can launch into Keauhou Bay, which is rimmed in sea cliffs riddled with blowholes, arches and lava tubes. On guided tours, kayakers can play follow the leader as they make their way through narrow rock-lined channels and into sea caves. A highlight of many tours is a float into a large cavern where mineral stained pink walls are reflected in the clear water. After touring the cliffs and caves, paddlers beach their boats in a calm cove and spend time snorkeling on nearby coral formations, exploring tidal pools or—for the adventurous—leaping into the water from surrounding cliffs. 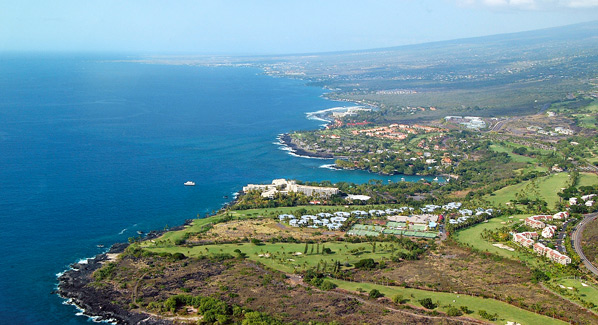 The shores of Keauhou Bay are lined with rugged lava formations riddled with caves and tidal pools. These waters are ideal for exploration by kayak. Photo: Hawaii Tourism Authority

From River to Reef

A favorite paddling trip on the island of Kauai begins on the banks of the Hanalei River. A short downstream paddle leads to the expansive semi- circular sweep of Hanalei Bay, which is surrounded by green mountain slopes and ringed by more than two miles of the island’s best beaches. If snorkeling is part of the plan, kayakers head toward Waikoko Reef, which lies on the northwestern edge of the bay. The entire reef can be explored during the calm conditions common in summer, but when winter swells roll in, the outer portion of the reef becomes a popular surf break, limiting snorkeling to areas closer to shore. 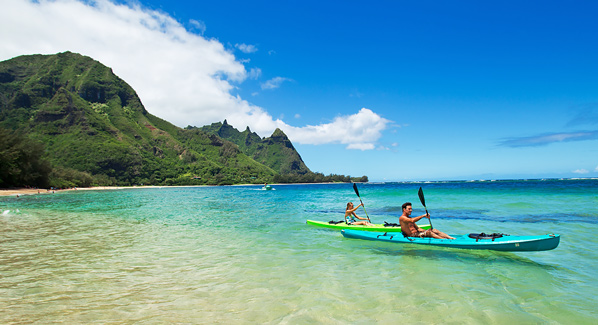 Kayak trips that begin in the Hanalei River lead into the expansive bay of the same name. The eastern end of the bay holds excellent snorkeling reefs. Photo: Hawaii Tourism Authority

The World’s Most Amazing Places to Kayak with Whales