We can’t all be surfing superstars. But even if you’ve never caught a wave, you can catch up with some of the best riders in the world during one of the many surfing competitions staged across the islands of Hawaii. If you are making plans to hit the beach and take in the action, here are five of the best events to watch.

November and December bring some of the planet’s largest and best surf to the north shore of Oahu. The world’s top riders come to challenge these waves, and to compete in three of the sport’s most prestigious events, known collectively as the Triple Crown. First in the lineup is the Hawaiian Pro in the small North Shore town of Haleiwa. Here, for two weeks in November, spectators line the beaches of Ali’i Beach Park to watch an international cast of surfers make their best moves. Two weeks later, the competition moves to the surf break known as Sunset, for the Vans World Cup. This legendary surf spot tests the world’s best on fast breaking walls of water that can rise two stories high. Come mid-December, the stakes are even higher at the Billabong Pipemasters, which draws more than 40 of the world’s most skilled big-wave riders to the infamous North Shore break known as the Banzai Pipeline. When conditions are right, this experts-only wave becomes the big stage where the best of the best risk it all for glory and six-figure prize money. 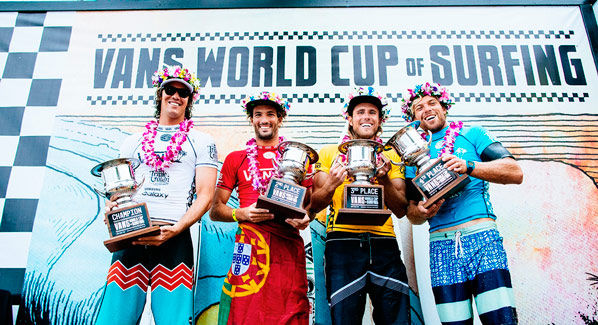 Finalists in the Vans World Cup of Surfing pose with their trophies. This three-event series draws thousands of spectators to the north shore of Oahu each winter. Photo: Vans World Cup

The Quicksilver in Memory of Eddie Aikau

The world’s oldest and most prestigious big-wave competition is known to most simply as “The Eddie.” This invitation-only event is named in honor of legendary Hawaiian surfer and lifeguard Eddie Aikau, who died heroically while saving lives during a storm. There is no fixed date for this competition, which could take place at any time between late December and the end of February, and only in years when conditions deliver ride able waves with faces that reach 30 to 40 feet in height. As many as 30,000 spectators will line the beach at Waimea Bay when the big swell does hit. Some two-dozen of the world’s best riders are invited to test their skills on the monster breaks. 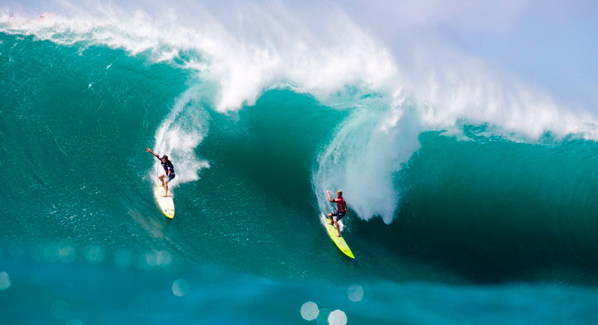 The Quicksilver in Memory of Eddie Aikau Big Wave Invitational is a World Surf League special event that is only staged when wave face heights hit the range of 40-feet-plus. Photo: Quicksilver

Not all surf contests are about fame and fortune, and this is certainly the case for the world’s longest-running amateur wave riding event. The Haleiwa Open was created in 1970 by two Oahu locals as a good will gesture to visiting Japanese surfers. Over the decades, the event has attracted an increasingly diverse range of both local and international competitors, who gather to showcase their talents on the surf breaks of Ali’i Beach Park. With both long board and short board categories, and divisions for everyone from early-teens to the 60-year-plus grandmasters, the competition remains true to its amateur roots. Competitors and spectators mingle in a setting that has a hometown vibe, and proceeds from the event go to the Haleiwa Surf Center and the local community.

On the mainland, it’s all about high school and college sports. In Hawaii, people follow the standings of the favorites in the HSA. Founded in the early 1960s, The Hawaii Surfing Association forged an alliance of professional and amateur surfers, organized community and regional surfing teams, and worked for the promotion and betterment of the sport. Today, the association produces 11 amateur surfing competitions on the island of Oahu every year, and another five events a year on the islands of Hawaii, Maui and Kauai. The 10-month HSA Hard Rock Cafe Surf Series features a mix of short board, long board, body boarding and knee boarding divisions. Competitors in each discipline earn points toward an invitation to the State Championships, which takes place in late April at the Ala Moana Bowls surf break on Oahu’s southern shore. 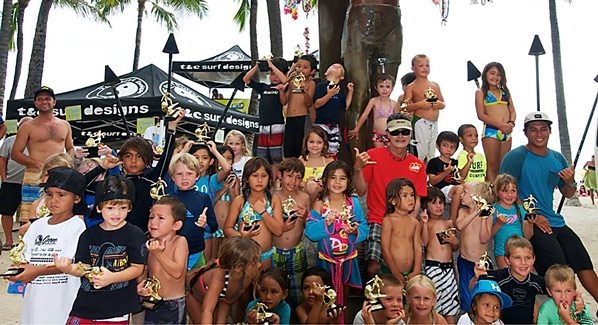 This eight-day celebration of the surfing lifestyle is named for Duke Paoa Kahanamoku, the Hawaii native revered as the father of modern surfing. OceanFest take place at Waikiki Beach, which is where Duke and his fellow beach boys first introduced the world to the sport of wave riding in the 1920s. Highlights of OceanFest include the World Championship of Tandem Surfing. For this unique subset of the sport, a two-person team rides Waikiki’s long gentle waves while performing a series of gymnastic-style tricks such as headstands and choreographed body lifts. The same waves provide the stage for the AccesSurf Duke’s Adaptive Surf Competition, which attracts some of the sport’s top disabled surfers. In addition to surfing, OceanFest features a variety of ocean sports that were close to Duke’s heart, including Paddleboard Racing, Swimming and Volleyball. The festival kicks off each year on the third week in August.

Catching the Wave: The Best Places in Hawaii to Learn to Surf