When you think of the Caribbean, you’re probably imagining clear waters and a white-sand beach, not a dark and mysterious cave. Unless, of course, you had in mind a fabled pirate cave, filled with plundered chest of gold and precious gems. Whatever buccaneer booty was hidden underground is long since gone, but visitors can still discover hidden visual treasures and unearth rewarding adventures at caves all across the islands. Here are ten of our favorites.

There are several hundred known caves within the Camuy River Cave Park, many yet to be explored. But you don’t have to be a helmet-clad spelunker to visit the park’s most popular caverns. The guided tour includes a tram ride between caves, and takes in Clara Cave, with a massive underground chamber more than 200 feet high and 700 feet long. Also on the tour is a descent into Spiral Cave for a glimpse of an underground river, and a chance to see the 13 species of bats that inhabit these caves. Daily visitation to the park is limited, so it’s best to arrive early. Night tours are sometimes offered. 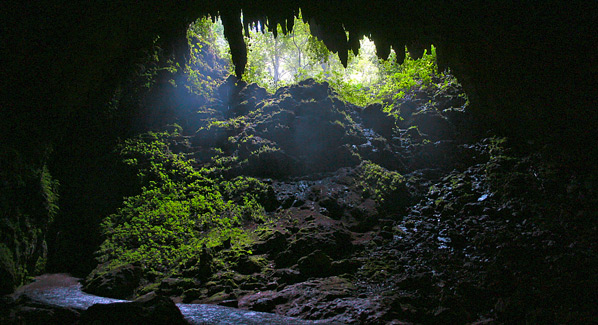 Tropical vegetation adorns the entrance to Puerto Rico’s Cueva Clara. Within, a massive chamber soars to heights of 200 feet and stretches more than two football fields in length. Photo: iStock

Jamaica’s Green Grotto Caves have sheltered Tiano tribes, Spanish soldiers, runaway slaves and gunrunners. This cavern takes its name from the green algae that clings to passage walls. Guided tours lead visitors through a soaring chamber once used as a dance hall, and into passages decorated with natural bridges and intricate limestone formations. The tour route continues downward to a subterranean body of crystal-clear water known as Grotto Lake, which can be explored by small boat. Vintage film buffs may recognize the caves from the 1973 James Bond film, Live and Let Die.

The largest island cave north of Cuba lies on the quiet island of Middle Caicos. Exploring this cave falls somewhere between an expedition and an excursion, as the interior has not been developed with marked routes, artificial lighting or groomed pathways. Guide services are available by inquiring at the nearby village of Conch Bar, and with the help of local knowledge, visitors can wade through shallow pools while negotiating slick rock surfaces as they make their way through the snaking passages of the cave’s inner recesses. Some areas show evidence of historic guano mining operations from the 1880s, and the story of the caves dates back to the Lucayan people. Getting to the cave from the resort island of Providenciales will require a ferry ride and a taxi. 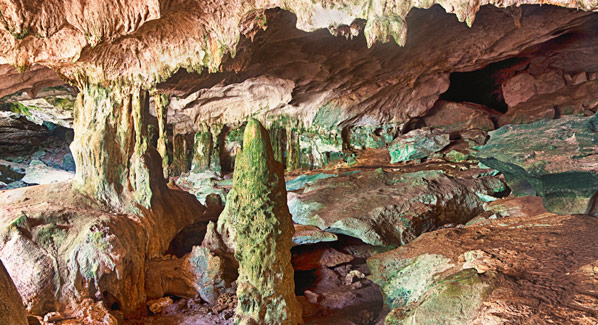 The quiet island of Middle Caicos hides an extensive series of limestone chambers known as the Conch Bar Caves. Once mined for fertilizer, they are now open to tourism. Photo: Karen Wunderman/iStock

A visit to Aruba’s rugged Arikok National Park should definitely include a stop at Fontein Cave. Don’t expect to be wowed by the size or scope of this cavern, as its passageways are little more than head high and fairly narrow, and no flashlight is needed to explore the main chamber. There are bats and stalactite formations, but the real draw is the pre-Columbian petroglyphs that adorn the walls and ceiling. The ochre-colored animals and symbols depicted within the cave are thought to be the work of indigenous Arawak peoples. There are no formal tours of the cave, though park rangers are sometimes on hand to answer questions.

The DR is riddled with caves, but most are inaccessible to the average traveler. One of the best—and easiest to reach—is the La Cueva de las Maravillas. Open to the public for just over a decade, as this cave lies just off the highway in the La Romana area, and within a small park that offers bathrooms, a museum and a restaurant. Daily visitation to the cave is strictly controlled, and conducted in small groups. The hour-long tour of the cave follows a route fitted with steps, ramps and secure walkways, with subtle artificial lighting that highlights the intricate formations while also creating interplay between light and shadow. 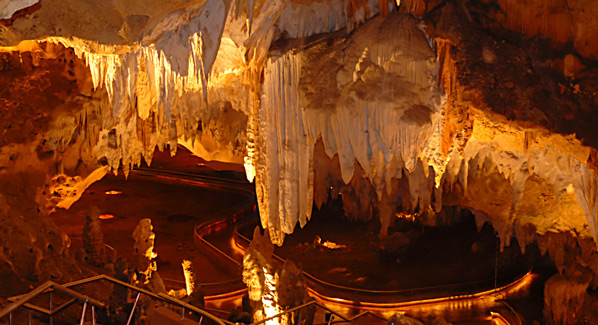 One of the most spectacular caves in the Dominican Republic is La Cueva de las Maravillas. Tour routes through the cave feature groomed walkways, steps and subtle artificial lighting. Photo: Dominican Republic Ministry of Tourism

This is cave exploration made easy. Visitors to Harrison’s Cave board electric trams that delve into a spectacular mile-long network of passages and underground chambers. Stops along the way give riders ample time to get out and explore their surroundings. The largest underground chamber, known as the Great Hall, soars to heights of 100 feet. This cave is renowned for its intricate formations, many of which hold embedded crystals that sparkle when illuminated by the electric lighting that has been placed through the cave. A highlight of the tour is a subterranean waterfall that plunges 40 feet into a clear water pool.

Indiana Jones would feel right at home in Crystal Cave. The adventure begins with a 45-minute walk through a lowland rainforest, followed by a 15-foot drop into the cave mouth. Inside, both marvels and adventures await. Narrow passages lead to expansive chambers, where crystals embedded in the walls and rock formations sparkle under the beam of a flashlight. Visitors mount inner tubes to float down an underground river, and take in a sacred Mayan lagoon, ceremonial wall carvings, pre-Columbian pottery and a unique flowstone waterfall. Those willing to shimmy through the cave’s smaller passages can gain access to hidden chambers that hold more secrets. 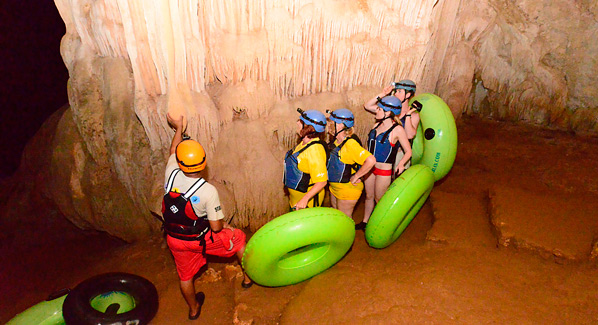 Crystals embedded within the flowstone formations of Belize’s Crystal Cave glitter in the beam of a flashlight. The cave also contains pre-Columbian ceremonial artifacts and wall carvings. Photo: Belize Tourist Board

You’ll have to climb a few stairs cut into the hillside to reach the entrance to Hato Caves. But once there, the going is easy, as tour guides join you on groomed pathways, and there’s no need to carry a flashlight, as lighting is hidden behind formations through the cave. Walking tours take about an hour, and lead to intricate speleothems, underground pools and pre- Columbian petroglyphs. Guides often share colorful stories of the cave’s history, which was once a refuge for escaped slaves.

Brac means bluffs in the Gaelic language, and the towering limestone bluffs that dominate the northern end of Cayman Brac are riddled with crevices and caves. Some visitors discover these caves on their own, but it’s also possible to arrange for guided tours. There are dozens if not hundreds of small to mid-sized caverns hidden in the island’s limestone substrate, and one that should not be missed is Peter’s Cave. Sitting cliffside some 150 feet above Spot Bay, the cave entrance is reached by a well-maintained path that winds its way up the bluff. Once there, the entrance provides sweeping views of island and ocean. 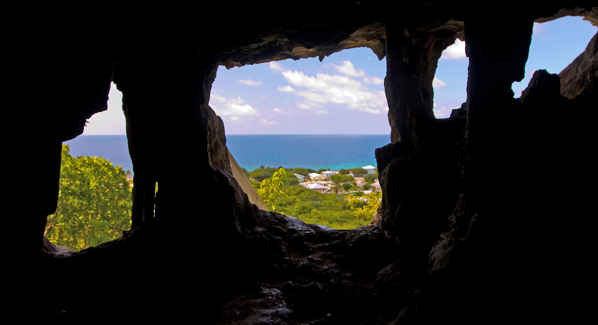 Located on the eastern end of Cayman Brac, Peter’s Cave has provided island residents with shelter from hurricanes for many years. The mouth of the cave frames a view of Spot Bay. Photo: Cayman Islands Department of Tourism

With some of the Caribbean’s best coral reefs just steps away from the beach, one might wonder why anyone would want to snorkel in a hole in the ground. It’s not for everyone, but several tour operators offer excursions to a hidden cave on the island’s west-central coast. Participants don swimwear and clamber down a boulder pile to enter a warehouse-sized chamber that’s half filled with water. Guides pass out underwater flashlights and lead snorkelers through a pair of rooms and though a tunnel that requires a slight duck-under swim to reach the final chamber. There are a few formations to admire, but the big attraction is simply the uniqueness of snorkeling underground.