Fantastic snorkeling adventures await, whether you start from shore or jump overboard

The British Virgin Islands are washed by clear waters and fringed by colorful coral reefs. There are hundreds of places all across this scenic archipelago where you can don mask and fins to enjoy a memorable afternoon of snorkeling. Some sites lie within a beachside stroll or a boat ride from a shoreside resort, while others may require a lengthier voyage to discover. Either way, you are in for a treat when you slip below the surface to discover a realm of waving sea fans and colorful fish.

Whether you are staying on island, passing through or coming ashore from a cruise ship, Tortola is the primary starting point for day trips to the region’s premier snorkeling destinations. The most popular is a group of rock formations known as the Indians, which lie a half hour boat ride across the Drake Channel from Tortola. The submerged portions of these jagged pinnacles are riddled by swim-through passages and covered in colorful corals and sea fans. Fish are plentiful, but so too are snorkelers, so the best times to avoid the crowds are either morning or later in the afternoon. Some operators will add a second stop to an Indians itinerary by moving on to the coast of Norman Island, where a west-facing cliff is cut by a trio of sea caves. There’s a fish-filled reef just off shore, but the main event is a chance to fin into these shadowy passages, where legend has it that the pirate Bluebeard once hid his treasure. 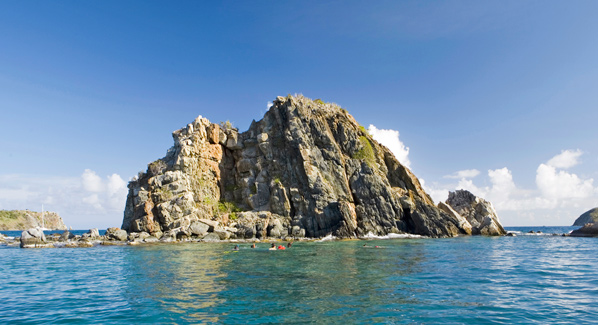 The rock formation known as the Indians is the most popular snorkeling destination in the British Virgins. It offers both dramatic drop offs and shallows filled with waving sea fans. Photo: iStock

Day trips also depart Tortola for the wreck of the RMS Rhone. The remains of this famous shipwreck lie scattered along a seafloor slope off Salt Island, at depths ranging from 20 to 80 feet. This site is a favorite with scuba divers, but snorkels can also enjoy the view from the surface, as details such as the hull, props and massive boiler tanks are clearly visible through the clear water. 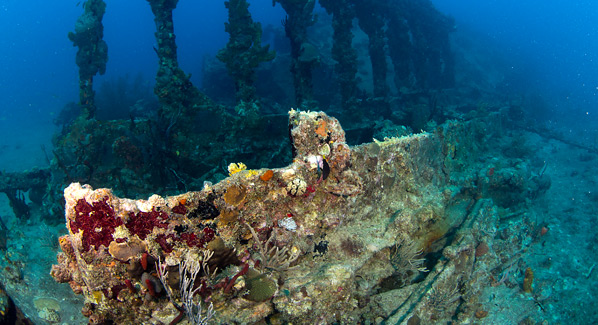 The wreck of the RMS Rhone is popular with scuba divers, but snorkelers can also view the scattered remains from the surface, as water clarity is usually quite good. Photo: Kelli Dickinson/iStock

Another popular excursion that launches from the west end of Tortola is a trip to Jost Van Dyke, and the picture-perfect site known as Sandy Spit. On this miniature island, a deserted beach provides an idyllic backdrop for explorations of the nearby fringing reef. Boat tours to Jost Van Dyke may also stop at two additional small islands—Green Cay and Sandy Cay— or include a dip in the tidal pool on Jost Van Dyke, where waves create a natural bubble bath within the enclosed rock-lined basin.

On Tortola itself, there are two sites worthy of mention. The shallow waters of Smugglers Cove are ideal for young and novice snorkelers, as conditions are benign and the waters hold a colorful array of tropical fish. Nearby Brewer’s Bay delivers a more varied underwater landscape, with a sea floor cut by small canyons and ledges decorated by a wide range of corals. Here, snorkelers stand a good chance of seeing turtles, stingrays and lobster.

With house-sized boulders piled on bone-white sands, The Baths is one of the world’s most scenic beaches. This site is a must-do for anyone visiting the island of Virgin Gorda, and it’s worth bringing the snorkel gear. Fish life and coral growth are sparse in the flooded grottoes created by the giant rock formations, but the interplay of light and shadow can be stunning. If ambition strikes, you can continue snorkeling along the rocky coastline south to Devil’s Bay. Boat tours to The Baths often make a secondary stop at a nearby site known as the Aquarium. Here, submerged rock formations are covered by a thicker coating of corals and sponges than at The Baths, and fish life is more abundant and varied. 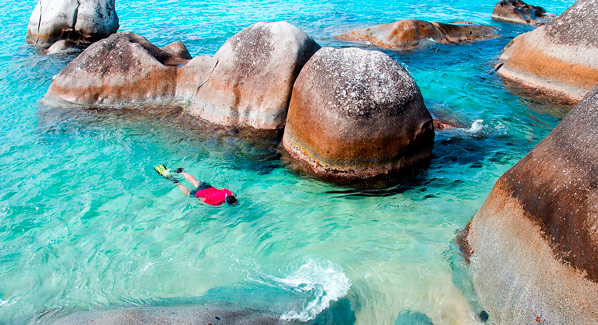 On the southern end of Virgin Gorda, giant boulders are piled in the shallows and on the beach, creating a series of swim-throughs and grottoes known as The Baths. Photo: Gary Blakeley/iStock

From the harbor at Spanish Town, snorkel trips launch to the small group of uninhabited islands known as the Dogs. On Great Dog, a reef parallels the island’s lee shore, dropping dramatically from depths of 10 to 60 feet, with plenty of ledges, overhangs, and tunnels to explore. Resorts in the Leverick Bay area on the island’s north coast have access to an extensive reef system that extends east and north from the Bitter End Yacht Club and Saba Rock. Signature named sites include Eustatia Reef, Oil Nut Bay, Necker Island, Cactus Point, and Mosquito Island, but don’t get hung up in the titles. This entire area is filled with rich coral growth and abundant fish life, and most anywhere you roll overboard you are likely to discover something memorable. The truly adventurous can sign up for an all-day cruising adventure to remote Anegada Island, where the beach at Loblolly Bay overlooks a maze of coral heads and a barrier reef that stretches for miles, hiding the remains of several hundred unfortunate ships that came to grief here. 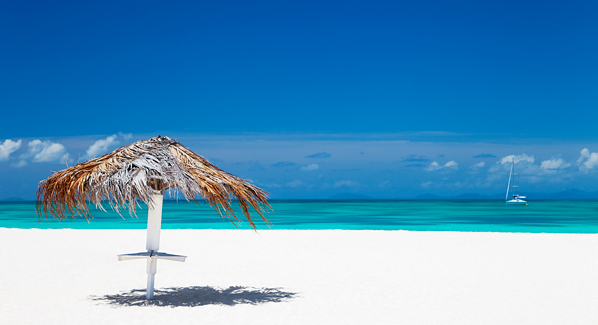 The British Virgins are home to the world’s largest fleet of charter sailboats. Experienced crews can go it alone, while others can set sail with a captain and crew. Either way, a charter vacation unlocks a wealth of additional snorkel sites, with access as easy as stepping off the transom. In addition to the Caves, crews stopping at the popular Bight anchorage on Norman Island can come ashore at Pirate’s Bar and take a short walk down the beach to visit a lively reef on the southern side of the bay. For an added dose of excitement, this site can be visited at night, when underwater dive lights will attract large, silver-sided tarpon. A short sail from the Bight brings you to Peter Island and the pristine reef at secluded Buttonwood Bay, where you can spend a relaxed afternoon away from the crowds. 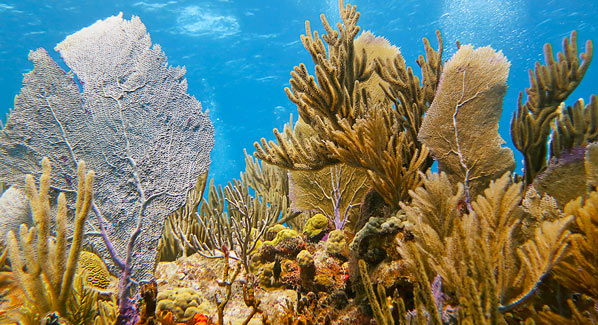 Many reefs in the British Virgins are covered in luxuriant arrays of soft corals and sponges. Popular snorkeling sites are protected with mooring buoys that help prevent anchor damage. Photo: iStock

Along the string of small islands leading eastward to Virgin Gorda are several more sites worth a mention. The channel between Salt and Cooper Islands is particularly rich in fish life, especially around Vanishing Rock, a coral-encrusted outcropping that is exposed only at low tide. A stopover at the beach club at quiet Cooper Island puts you within an easy dinghy ride of Cistern Point and Little Carvel Rock, while adjacent Ginger Island offers the richly overgrown coral slopes of Alice’s Backside. If your route takes you to the north side of Tortola, a site that should not be missed is Guana Island’s Monkey Point, where you will be enveloped in swirling schools of blue-striped grunt and yellowtail snapper. In calm weather, you can also visit Coral Gardens on nearby Camanoe Island. Here, parrotfish, snapper and barracuda patrol an expansive field of sea fans and brain corals, while shy garden eels and jawfish peek cautiously from their seafloor burrows. 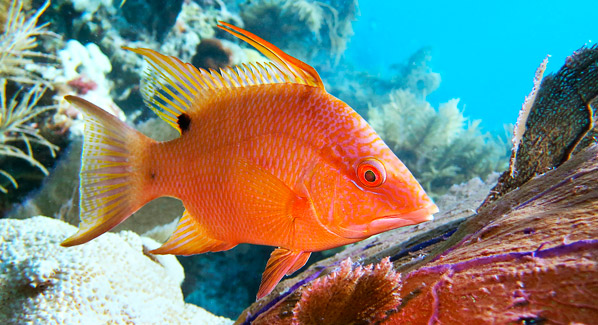 A young hogfish on a shallow reef. Because fishing is not allowed within the waters of the British Virgin Islands’ marine parks, marine life on these sites often show no fear of humans. Photo: iStock

Back to British Virgin Islands

Into the Blue: Best Snorkel Sites on Maui