Coral reefs make the best snorkel sites, and the small nation of Belize has corals aplenty. Just off the country’s Caribbean coast lies one of the world longest barrier reefs, stretching north to south for more than 190 miles. Scattered along its length are dozens of small, scenic islands known as cayes, which provide ideal starting points for snorkeling excursions, as well as a trio of offshore coral atolls—the only ones in the Caribbean. With the arrival of cruise ships in recent years, it’s possible to enjoy a Belize snorkeling adventure while in port for the day. But many of the best sites are available only to those who stay in country a bit longer, booking into a base camp at one of the beachside resorts or small lodges scattered throughout the cayes. Here are some of our favorite sites to discover the best snorkeling in Belize. 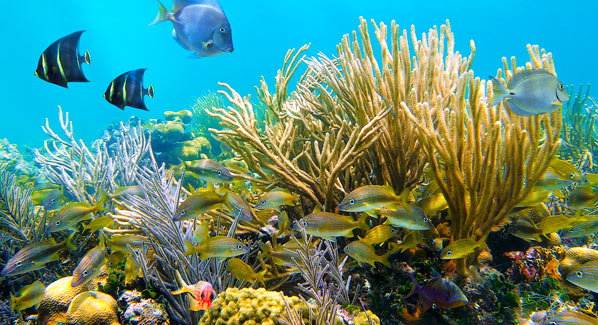 The reefs of Belize are covered in a mix of hard and soft corals. Shallow reefs offer the most vibrancy, as more sunlight penetrates the water to reveal the true colors of the reef. Photo: iStock

Ambergris Caye is home to some of Belize’s most popular snorkeling sites. This largest and most northerly of the cayes is less affected by turbid outflow from mainland rivers, resulting consistently clear waters. In addition, reefs run closer to shore here, allowing for shorter boat rides to prime sites. It’s possible to snorkel right from the beach at select resorts along Ambergris’ eastern shore, but the underwater terrain is often sea grass beds with only the occasional coral head. These nearshore sites can be rewarding for those who enjoy critter spotting among the grass and coral rubble, but the actual reef line typically lies beyond easy swimming distance. The best sites are reached by boat, and are located within the Hol Chan Marine Reserve. Lying some four miles south of the town of San Pedro, this underwater national park teems with fish life, especially at sites such as The Cut, where you are likely to see large grouper, barracuda and schooling jacks. The most famous destination in the park is Shark Ray Alley, which is a shallow, sand bottomed area where nurse sharks and stingrays gather. Neither of these species poses a threat to snorkelers, and most visitors are thrilled to find themselves immersed in a swirling mass of marine life. Other favorite sites near San Pedro include Mexico Rocks, which is a series of shallow patch reefs located north of town, and well-sheltered from ocean swells. Fish watchers will also enjoy Tres Cocos, where impressive stands of elkhorn coral attract a wide range of colorful tropical fish. There are a number of charter boat operators based in San Pedro, and finding a ride to the site of your choice is never a problem. 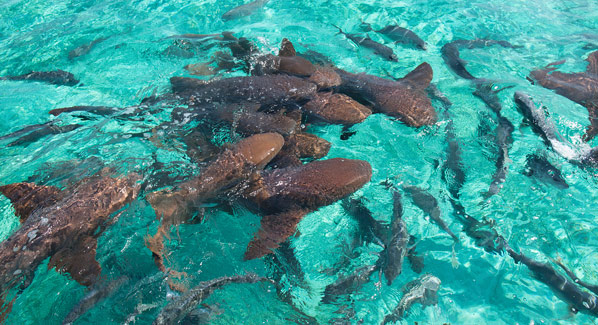 Nurse sharks congregate in the waters of Hol Chan Marine Reserve at a site known as Shark Ray Alley. Here, snorkelers can enter the water safely to interact with the schooling fish. Photo: iStock

In addition to an expansive barrier reef, Belize is also home to the only true coral atolls in the Caribbean. Sitting 25 to 50 miles off the mainland, these coral-ringed plateaus offer acres of protected shallow water ideal for snorkelers. Turneffe Atoll lies closest to the coast, and is the easiest to reach by boat from the mainland or the northern cayes. Dotted with hundreds of mangrove islands, Turneffe is best known as a flats fishing mecca, but it is also an excellent snorkeling destination, as there are acres of shallow coral gardens washed by clear oceanic water. Sites can be reached during a day trip from Belize City or San Pedro, and there are also several small lodges tucked among the islets that cater to fishermen, but also welcome scuba divers and snorkelers. Some 20 miles farther to sea is Lighthouse Reef Atoll, home to the famous Blue Hole. Reaching this site will require a long boat ride across open water, which may not be for everyone. Once there, however, you can don mask and snorkel to hover on the precipitous edges of this famous geological formation, which is ringed by shallow coral reefs. Trips to Lighthouse will usually include a second stop at Half Moon Caye, a bird sanctuary which combines a shallow snorkel site with the chance to see rare red-footed boobies and other sea birds. Farther to the south, Glovers Reef Atoll provides an expansive shallow playground for snorkelers, with more than 700 patch reefs lying in shallow water within a protective coral ring. Several small resorts perch on tiny islands within the atoll, and day trips from the coastal town of Dangriga provide access for day trips.

The Blue Hole is one of Belize’s best-known landmarks. Essentially a giant underwater sinkhole, it is located within Lighthouse Reef Atoll, which sits 50 miles east of the mainland. Photo: iStock

Belize’s southern cayes are smaller and less settled – some no more than a few acres of sand with a mattering of palms and perhaps a single Robinson Crusoe-style dwelling. The best snorkel sites are located farther from shore, as river water can cloud nearshore sites. For many years, the premier destination in this area has been Rendezvous Caye. Now owned by a cruise line, it is a small spit of sand fitted with the comforts of civilizations such as bath houses and cold drinks—well suited to casual snorkelers seeking a day at the beach, but somewhat less so for those looking for a more solitary in-water experience. To escape the crowds, you can book a small boat tour originating in the coastal towns of Placencia or Dangriga. As an alternative to Rendezvous Caye, guides may drop you at nearby Colson Cay, but the area’s best coral and fish life are found at the Gladden Cays, where extensive arrays of corals and sponges line the shallows inside the reef, and the nearby Gladden Spit creates a gateway for larger fish to move between lagoon and open ocean. This coastline is also home to a number of small resorts and eco lodges, each offering an opportunity to snorkel right from the dock, or to discover surrounding reefs with a short boat ride. Among our favorites are Thatch Caye, Coco Plum and the Fantasy Island Eco Resort. 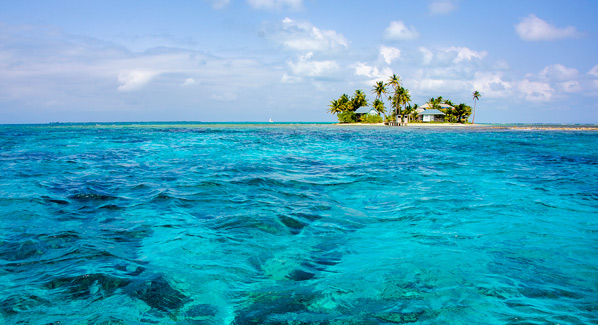 Into the Blue: Best Snorkel Sites in The Florida Keys