Ring in 2023 in these Caribbean Islands

Fireworks on the beach, parades in the streets, and plenty of music and dancing are what you’ll find on these islands during the holiday season. When the clock strikes midnight in St. Kitts, St. Barts, Bermuda, St. Croix, the British Virgin Islands, Barbados, and the Bahamas you’ll want to be there to ring in the New Year.

The Kittitian culture takes on Sugar Mas as the Federation’s national event combining what many call Carnival with Christmas and New Year’s celebrations. It’s essentially one big party that lasts from the end of November until the first week of January. There’s a calypso show to kick off the season and the event culminates with Parade Day on New Year’s Day where revelers wear colorful feathered costumes and march through the nation’s capital of Basseterre. 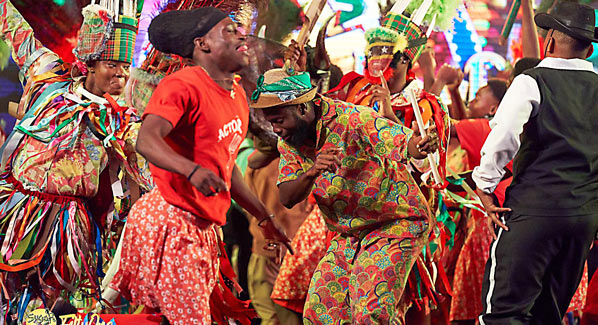 This annual rendezvous attracts sailors and boaters from around the world. The island alone draws jet setters and stars, but locals love the festive holidays here as well as returning visitors. It’s hard to find a more picturesque place than the harbor of Gustavia to celebrate the New Year. Boats don lights and holiday decorations, villas and hotels are brimming with ornaments and the harbor is trimmed with lights. At midnight, the sky lights up with magical fireworks, and yachts moored off the island and, in the harbor, sound their foghorns in unison. 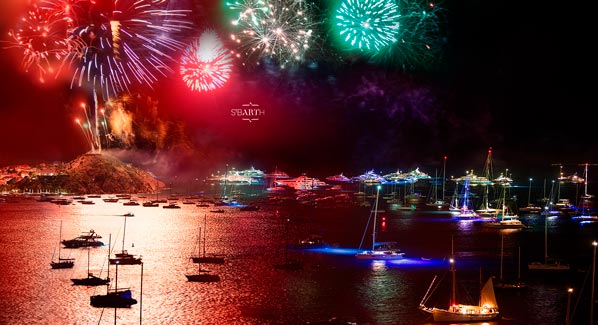 At midnight Fort Oscar is illuminated from above by a sky bursting with fireworks. Hotels and restaurants on St. Barts host costume parties, special dinners, and festivities. Photo: St. Barth Tourism

The island of Bermuda takes on the holidays with warm and inviting passion as seasonal celebrations begin early with walks, parades, and parties throughout the towns. One of the most popular traditions is the New Year’s Eve Onion Drop where visitors and locals come to gather and walk the cobblestone streets of St. George’s on December 31. After a few stops at local pubs, the crowd heads to King’s Square to await the big drop. Music, fireworks, and the community gathering run from 8:30 p.m. to 12:30 a.m.

The town square in St. George’s is the most popular place in Bermuda to ring in the New Year. The onion, the pride, and the joy of Bermuda is celebrated on New Year’s Eve with the drop at midnight. Photo: Anna Bryukhanova/iStock

The Crucian Christmas Festival takes place from late December until early January culminating around Three Kings Day in the seaside town of Frederiksted. While most Caribbean islands begin Carnival in the spring here the action starts at the end of the year. Elaborate and colorful costumes made the year before are donned in parades that wander through the streets and across the island including one big street party in Christiansted where roads are blocked off so revelers can celebrate. On December 31 a free reggae concert takes place at the Festival Village in Frederiksted with performances by Maxi Priest and a grand finale and salute to the New Year with fireworks. 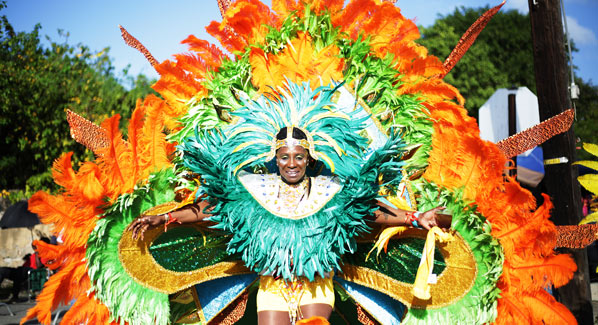 Beautiful women in spectacular costumes with feathered headdresses get the crowd’s attention and votes during the Crucian Christmas Festival on St. Croix. Photo: USVI Tourism

These islands are popular with yachties all year long but during the holiday season, many gravitate to its countless island harbors and coves. As New Year’s Eve approaches there’s plenty of boat-to-boat hopping as well as bar hopping throughout the islands. At midnight, the foghorns sound on the water, and fireworks light up the skies. Back on land, Foxy’s Bar hosts the popular Old Year’s Night party that people talk about for years as a must-do in the British Virgin Islands. Every year, this huge celebration held on the white sand beaches of Jost Van Dyke explodes with live music, food, and drinks. 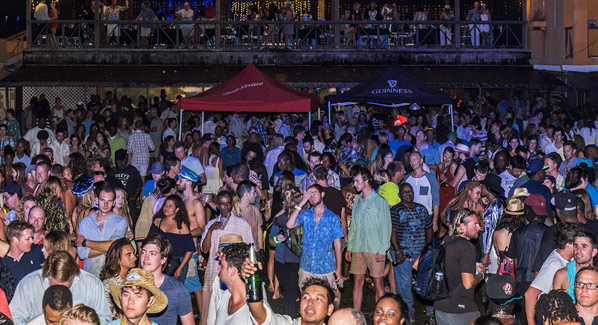 The best New Year’s Eve party spot in the BVI is Foxy’s Bar & Restaurant where people dance and drink through the night and on until the next day. Photo: Foxy’s

There are more than enough options to celebrate the New Year in Barbados. For a low-key night, find a spot on the beach along the west coast and wait for the fireworks to start. West coast hotels compete for space in the sky to set off their fireworks at midnight. Many hotels host New Year’s Eve parties and themed dinners. Splurge for a stay at the famous Sandy Lane or have dinner overlooking the water at The Cliff, dine on a tasting menu, and enjoy live music until 2 a.m. Both Holetown and St. Lawrence Gap close out the year with parties and fireworks. 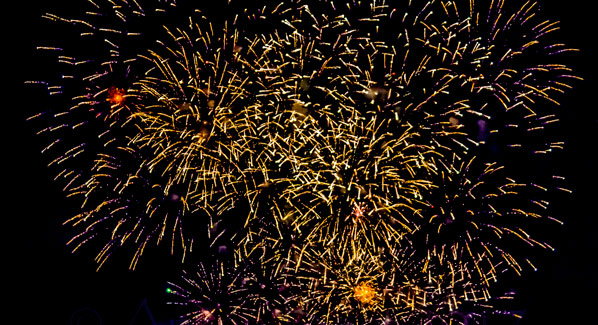 West coast hotels like the Hilton in Barbados welcome the New Year with fireworks and beach parties. Crowds gather early along the sand for a prime viewing spot. Photo: Anton/Flickr

Nassau is the place to be for Junkanoo, the street party that takes place on Bay Street for Boxing Day and New Year’s Eve. What began as a simple parade has evolved into a grand festival. There’s music, dancing, and brightly colored intricate costumes to attract the crowds. The rhymical music resonates throughout the town as cowbells, goat skin drums and an assortment of brass horns play a march for everyone to join in. 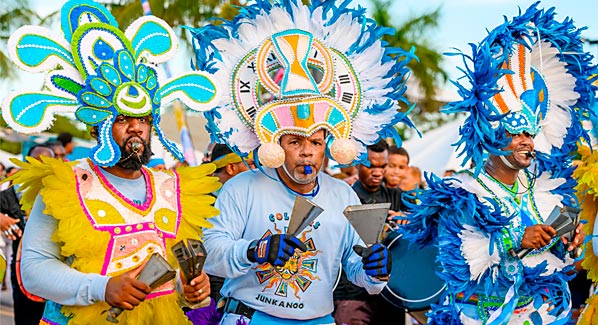 Horns and cowbells ring in the holidays and the New Year at the multi-day Junkanoo festivities throughout the Bahamas, with the most spectacular events taking place in Nassau. Photo: Stringfixer