Extending to the southwest from Miami like a giant comma, the emerald island chain of the Florida Keys faces the blue Atlantic Ocean. Between land and sea lies a submerged wall of coral, North America’s longest barrier reef. This vast network of submerged grottoes, coral gardens and patch reefs provides a 100-mile-long aquatic playground for scuba divers and snorkelers. Most reefs lie too far from shore to be reached by swimming, but you don’t need to own a boat to enjoy them, as charter services scattered throughout the Keys provide easy access to the best sites. Here are three of our favorites.

John Pennekamp Coral Reef State Park was America’s first underwater park, and still its most popular. Famous sites such as Molasses Reef and the Christ of the Deep statue draw steady streams of both divers and snorkelers, but with more than 70 square miles of underwater terrain to explore, there’s much more to discover. Snorkelers can hover over the remains of shallow shipwrecks such as the Benwood and City of Washington, swim among swarms of yellowtail snapper at sites such as the Dry Rocks, or explore coral grottoes at Sea Garden Reef. In addition to boat charters departing from the state park, there are a number of operators based at marinas scattered across Key Largo. Summer is the most popular season for snorkeling, as waters are typically calmest and clearest at this time. Operators run year round, though the north winds and larger waves that come with winter cold fronts may limit access to some sites. Trips are typically three to four hours in duration, with a 20 to 30 minute boat ride to the reefs. 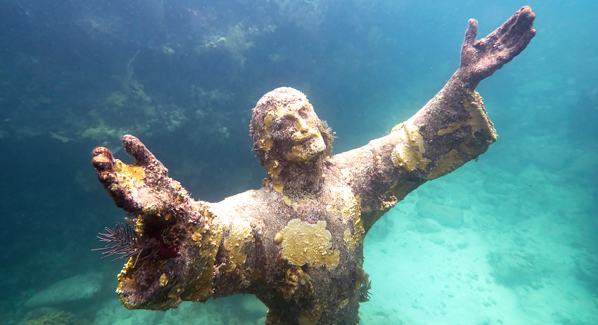 One of the most popular and best-known underwater attractions at John Pennekamp Park is the Christ of the Abyss statue, which rises from 25 feet of water on Dry Rocks Reef. Photo: Microgen/iStock

For a chance to see some really big fish, follow Florida’s Overseas Highway as it leapfrogs across a series of long bridges and small islands, with highway mileposts counting down towards Key West. Slow down as you approach Mile Marker 27 and look for one of the charter operators offering trips to Looe Key National Marine Sanctuary. It’s an easy five-mile ride out to the sanctuary, which is home to some of the largest groves of elkhorn coral in the Keys. The reefs at Looe Key are also home to some impressive fish life. You are almost guaranteed to be shadowed by a sleek barracuda. Relax, despite their fearsome-looking teeth, these high-speed hunters are not a danger to snorkelers. Ditto for the nurse sharks which frequent the undercut crevices of the reef, and the typically shy reef sharks that may be seen passing out on the edge of visibility. Stingrays, ranging in size from bathmat to beach towel patrol the sand, while silver-hued tarpon of up to six feet in length cruise between coral heads. In recent years, the park has seen the return of the world’s largest species of grouper: the goliath. Several of these big fish, which can grow to weights of more than 400 pounds, have taken up residence among the corals. Located due south from the protective shores of the islands, Looe Key is less affected by the northerly winds of winter, but snorkelers may encounter a swell when stronger winds or seas come in from south or east.

Sleek, silver barracuda are often sighted patrolling the shallow reefs of the Florida Keys. Somewhat territorial in nature, they may follow snorkelers, but pose no real threat. Photo: Joe Quinn/iStock

Key West is the nation’s southernmost city, but snorkelers will need to go a bit further to discover some of North America’s best snorkeling. There are boats departing daily for nearby Sand Key, but the finest shallows in the region are reserved for those willing to take on a somewhat longer boat ride out to the Dry Tortugas National Park. This 150-square-mile marine reserve lies mostly underwater, with just a handful of low-lying islands scattered among a tapestry of shallow reefs and coral grottoes. Single-day trips to the Tortugas depart from Key West for a two-plus hour voyage to the Park’s signature site: Fort Jefferson. After touring the historic remains of this imposing brick fortress, passengers have plenty of time to don mask and snorkel to explore the nearby shallows, or glide through the pilings of an old coal dock, where schools of baitfish flit away from patrolling tarpon or barracuda. Tours return to Key West in time to shower and catch the sunset before embarking on an evening of revelry along Duvall Street. 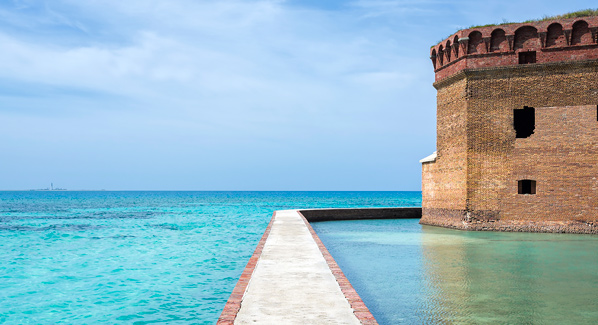 Perched on tiny Garden Key, Fort Jefferson overlooks the coral reefs of the Dry Tortugas. Located 90 miles from Key West, the site is accessible only by boat or seaplane. Photo: Scott Cramer/iStock

Back to Florida Keys