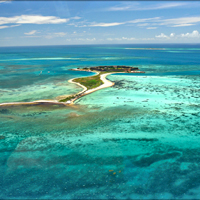 Open spaces, fresh air and natural beauty draw us to national parks. Add a beach and you’ve got a dream getaway perfect for these times or any time. While the Keys reopened to visitors on June 1, 2020, there are protocols for safety including maintaining social distance and masking up. These three parks are primed for swimming, snorkeling, exploring or, just enjoying the laid back lifestyle of the Keys.

There’s no question that a trip to the Dry Tortugas should be on everyone’s bucket list. This is the nation’s most remote national park and is actually seven small islands surrounded by crystal clear waters of the Gulf of Mexico. You’ll find islands dedicated to a bird sanctuary, coral reefs rich with sea life, sandy shoals and islets to explore. Include time to meander through Fort Jefferson, an impressive circa 1800 citadel that occupies most of the 16 acres on Garden Key. One of the largest forts to be built to protect shipping lanes took almost 30 years, although, it was never completed. 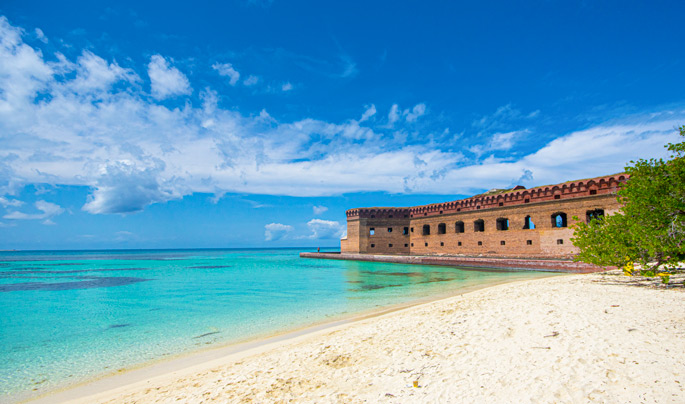 Due to the location and easterly flowing current the marine life is vibrant and abundant so divers and snorkelers are more than pleased. The swim area is bordered by large coral heads giving reef dwellers like parrotfish, angelfish and triggerfish plenty to crunch on. The pier pilings attract a variety of small colorful fish while the deep channel is home to grouper, tarpon and barracuda. On a swim around the moat wall expect to see reef squid, hogfish and nurse sharks. A highlight includes the trip there, either via the 70-mile ferry from Key West, a private boat or seaplane. There is no cell phone coverage so chalk this time up to digital detoxing.

Touted, as the best beach in the Florida Keys, the natural sandy shores of Bahia Honda are actually three beaches. Calusa Beach is the smallest and most picturesque accented with a few palms. Portions of the long stretch of Sandspur face the Atlantic and Loggerhead with its shallow sandbar becomes the preferred spot to soak up the atmosphere from a lounge chair plunked down at waters edge. 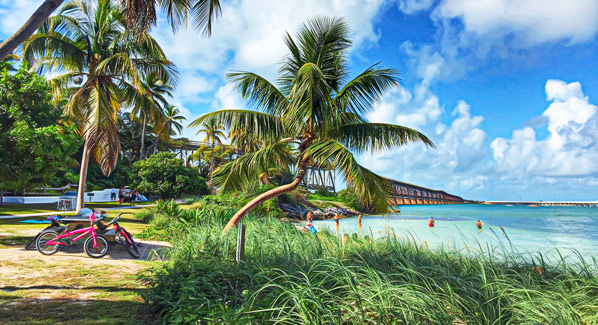 Bahia Honda’s Calusa Beach is adjacent to the abandoned Bahia Honda Bridge, once used as a railroad into the Keys. It’s most picturesque at sunset. Photo: Jane Fiala/Flickr

While many are eager to don mask and snorkel to explore the crystal clear waters, the underwater sightings are slim with a glimpse of a rare lobster blanketed in the grassy flats or a school of shy immature fish peeking out from coral cervices. To really see what the Keys has to offer in the colorful underwater world take the 12-mile boat trip to Looe Key Reef. This U-shaped marine sanctuary varies in depths from 5 to 15 feet and snorkelers of all levels will be delighted with the sightings of sergeant major, anglefish, parrotfish, grouper, stingrays and moral eels. Spotting a nurse shark lurking in the sandy bottom is not unlikely.

For a bit of history beachside, this park delivers a look at Florida’s past before the Civil War. Built to hold pirates at bay in the neighboring waters surrounding the state, construction of this stronghold began in 1844 and ended in 1860. Then during the Civil War, the fort became the center for naval operations capturing Confederate ships. Today, history buffs can explore the red brick corridors lined with cannon and gun ports on their own or take a narrated tour. 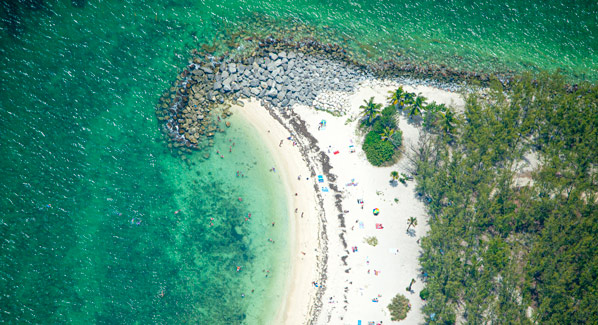 Beach lovers find the waters here to be Caribbean blue. The spot is where the Atlantic Ocean converges with the Gulf of Mexico keeping the waters flowing clean. While the shoreline invites with a sandy beach, a few steps in the water reveal a rocky bottom. Offshore, the rocks make an attractive environment for tropical fish, so grab the snorkel and mask for a fruitful exploration. 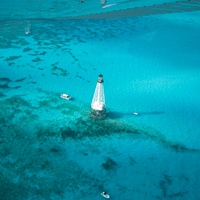 Lighthouses appeal to the romantic in all of us, and Florida has its share of these iconic landmarks lining the coasts. This spider- legged structure, which dates from 1873, sits atop a reef in the Florida Keys named for the USS Alligator, a Naval Schooner that foundered on the coral shallows. The light sits four miles east of the village of Islamorada. It is closed to the public and can only be reached by boat. A local Keys artist now stages the Annual Swim for Alligator Lighthouse event to raise awareness for the preservation of lighthouses. Photo: Rob O’Neal/Key West Seaplanes


Deprecated: Theme without sidebar.php is deprecated since version 3.0.0 with no alternative available. Please include a sidebar.php template in your theme. in /var/www/vhosts/tropixtraveler.com/httpdocs/web/wp-includes/functions.php on line 5411