Celebrate like a local at these island-style Friday festivals

Forget hotel floorshows and tourist-centric luaus. For an authentic take on Hawaii, do what the locals do and take to the streets. Street parties are a thing on each of the major Hawaiian Islands, and they happen on Friday nights. Stores and galleries put on special showings, food trucks and craft stands show up and live music is often in the mix. Here are the places to be if you want to party like a local.

Honolulu’s Chinatown district comes alive on First Fridays, as thousands converge on the 12-block area around the Hawaii Theatre. This district is home to an eclectic mix of galleries, clothing boutiques and wine shops, many of which stay open late to host exhibitions, tastings and live entertainment. Some sweeten the offering with special deals. The mixing and mingling goes on from 6 p.m.to 9 p.m., then the parties continue at nearby restaurants and clubs.

Two weeks later, the action switches to Third Saturday and the Honolulu Night Market. This monthly happening is an indoor-outdoor event that takes place at the Cooke Street Warehouse in the Kaka’ako district. The program varies, but usually includes showings by local clothing designers and a mix of arts and crafts booths. To ramp up the vibe, there’s a skate ramp, live music, food trucks, drink service and a kid’s zone. The action starts around 6 p.m.

The final Friday of the month is the time to Eat the Street. Starting at 4 p.m., more than 40 of the island’s most popular food trucks gather on South Street. It’s best to come early if you don’t want to wait in line, because crowds of up to 7,000 show up to chow down. After sampling some of the unique culinary choices, diners linger for live performances and check out the offerings of street vendors. 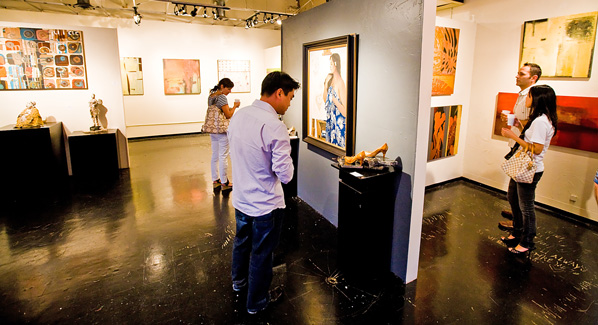 Pau hana is the Hawaiian expression for the end of the workday spent relaxing with family and friends. The island of Maui enjoys some pau hana time each week with Friday Town Parties. Held in one of four different historic downtowns each week, these gatherings combine live musical performances with featured artists, food and drink, children’s activities and a bit of strolling, shopping and conversation. The party rotates around the island, with Wailuku First Friday, Lahaina Second Friday, Makawao Third Friday and Kihei Fourth Friday. Months that have a fifth Friday provide an excuse to carry the festivities to the ferry for a trip to the nearby island of Lanai. The evening gathering centers around Dole Park, and spreads to the streets of downtown Lanai City to include live performers, food vendors and special discounts and prizes at local merchants. 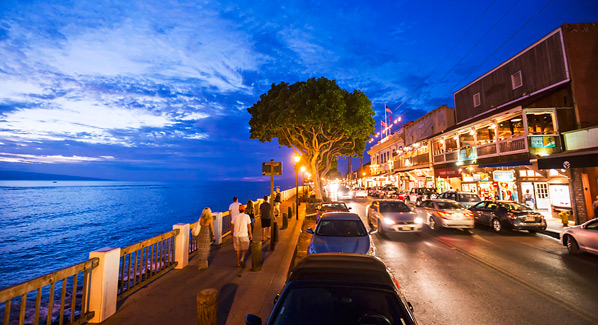 The historic seaside village of Lahaina is one of four towns on the island of Maui that hosts a revolving series of Friday evening festivals throughout the year. Photo: Hawaii Tourism Authority

The normally quiet town of Hanapepe turns lively for Art Night, which takes place every Friday from 6 p.m. to 9 p.m. along Maui Street. A dozen of the town’s galleries stay open late for showings, and local artists and artisans set up in curbside kiosks. Food trucks provide refreshment, while street musicians perform both contemporary and traditional Hawaii tunes. It’s a family friendly affair with the sort of small town vibe not found on other islands. 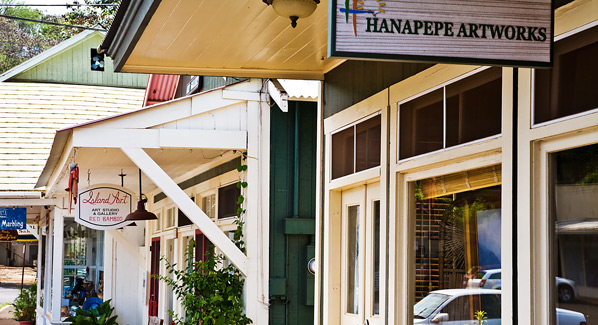 Galleries and shops in the town of Hanapepe stay open late for the town’s Friday Night Festival and Art Walk, which is one of the favorite gatherings on the island of Kauai. Photo: Hawaii Tourism Authority

The Big Island’s take on Friday parties happens on the east coast town of Hilo. Aloha First Friday delivers the requisite combination of arts and crafts displays, live music, food and family activities. This gathering often has a local vibe, as townsfolk come to mix and mingle. But visitors are always welcome, and vacationers staying at west coast resorts will sometimes make the cross-island drive to join in the festivities.

For west coast residents and visitors wanting to stay closer to home base, the seaside town of Kailua stages the Kokua Kailua Village Stroll one Sunday each month. From 1 p.m. to 6 p.m., a portion of Ali’i Drive is blocked off for the gathering, and more than 100 vendors set up shop on the street and sidewalks, offering everything from tie-dyed t-shirts and handmade jewelry to fine works of art. There’s plenty of food and a concert that often features native Hawaiian music.

Hilo’s historic downtown district is the setting for the monthly First Friday gathering, which brings locals and visitors into the streets for food, music and fun. Photo: Hawaii Tourism Authority